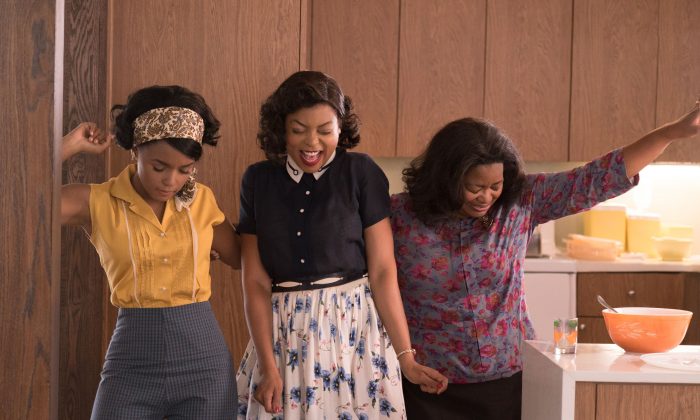 So there was this African-American woman in the 1960s, see, whose math skills not only outstripped all her male rocket-scientist colleagues, but also put the computation smack down on NASA’s gigantic, room-sized IBM computer. Is that a role model, or what?

Her staggeringly accurate calculations were solely responsible for sending America’s most famous astronaut into orbit and saving his life (more on that later), and for keeping America from embarrassing itself in front of its heretofore superior, Cold War space-competitor, the mighty Russians. That’s mighty honorable.

The now 97-year-old Katherine Johnson qualifies for having her picture in the dictionary next to the definition of ‘rocket scientist.’

Because there wasn’t just one; there were three such math-brilliant African-American women working in the early-stage astronaut program during the Jim Crow era. Who knew? Hidden figures, indeed.

The story, while decidedly formulaic, is what old-school Hollywood does best: a film filled with feel-good tropes that seek to atone for America’s racist-sexist past by boasting about America’s unsung wizardly talent. Call it the singing of unsung heroes, through biopics.

Then there’s “The Imitation Game,” which also championed a downtrodden (non-American) math-wizard minority, whose calculations saved millions of lives in World War II, and “Red Tails,” about the first African-American fighter pilots, whose aviation wizardry saved lives, also in WWII.

‘I Have No Idea Where Your Bathroom Is’

So, as mentioned, embarrassed by Russia’s space progress, NASA hired the highest-IQ rocket scientists (figurative and literal) it could get its hands on.

Katherine Johnson (Taraji P. Henson) calculated rocket trajectories for the Apollo-series moon-shots. So how did she thereby also save famous astronaut and former Marine pilot John Glenn’s hide, apart from obvious reasons (rockets are dangerous)? As author Tom Wolfe famously related in his book “The Right Stuff,” America was collectively depressed about the situation, knowing as we did that “our rockets always blow up.”

When she finally gets the job at NASA, we see her on her cross-bearing (and book- and paperwork-bearing), high-heeled sprints down long halls, across vast parking lots, and up and down staircases, to the “colored only” bathroom—far, far away from her desk—only to later get bawled out for tardiness.

She suffered all that, along with some random white male colleague labeling an empty coffee thermos as “colored coffee”—and still managed to out-math the whole males-only moon movement. Including her manager (Kevin Costner).

Favorite scene: Katherine’s given ridiculously redacted stacks of data to check, by arrogant colleagues who think their calculations don’t stink. She forthwith holds the sheets up to the light, sees through the black redaction ink, and discerns that they do in fact stink, big time.

Katherine’s fight to stand up for herself and her dead-on, prescient, virtuoso calculations; Mary’s court petition to get accreditation from the heretofore Negros-forbidden Hampton High School; and Dorothy’s outsmarting of segregationist librarians to acquire books on advanced Fortran computer-programming (not available in the library’s colored section) so as to avoid becoming IBM-obsolete, are the film’s three narrative threads. Throw in a smidgen of romance and family.

“Hidden Figures” is largely a look at the racial tensions of the Civil Rights era, tonally similar to the “The Help,” and will most definitely provide role models for girls and minorities in the fields of science, technology, engineering, and mathematics—and especially in the character-building areas of integrity, perseverance, and communication.

After all, the now 97-year-old Johnson recently received a Presidential Medal of Freedom. She qualifies for having her picture in the dictionary next to the definition of “rocket scientist.”

It’s highly likely “Hidden Figures” is coming out now due to the pressure on Hollywood to diversify its offerings, after the last two years’ worth of much-criticized, all-white Oscars.

Also in the running are “The Immortal Life of Henrietta Lacks,” starring Oprah, and a biopic about 1960s civil rights activist Angela Davis.

Given the current state of America’s post-election rise in hate crime, the event of a defiantly retro #OscarsFOREVERwhite situation wouldn’t be surprising. Hopefully these films, and more like them, will help heal our currently racially divided nation.

At times saccharine sweet, “Hidden Figures” has some fun humor. In a scene reminiscent of the one in “American Sniper” where a cop stops Navy SEAL Chris Kyle for speeding and ends up giving him a police escort to the Naval amphibious base, here, after the women’s car breaks down (Dorothy rolls up her sleeves and fixes it herself), an initially racist cop gives the ladies a police escort to the office upon finding out they work for NASA.