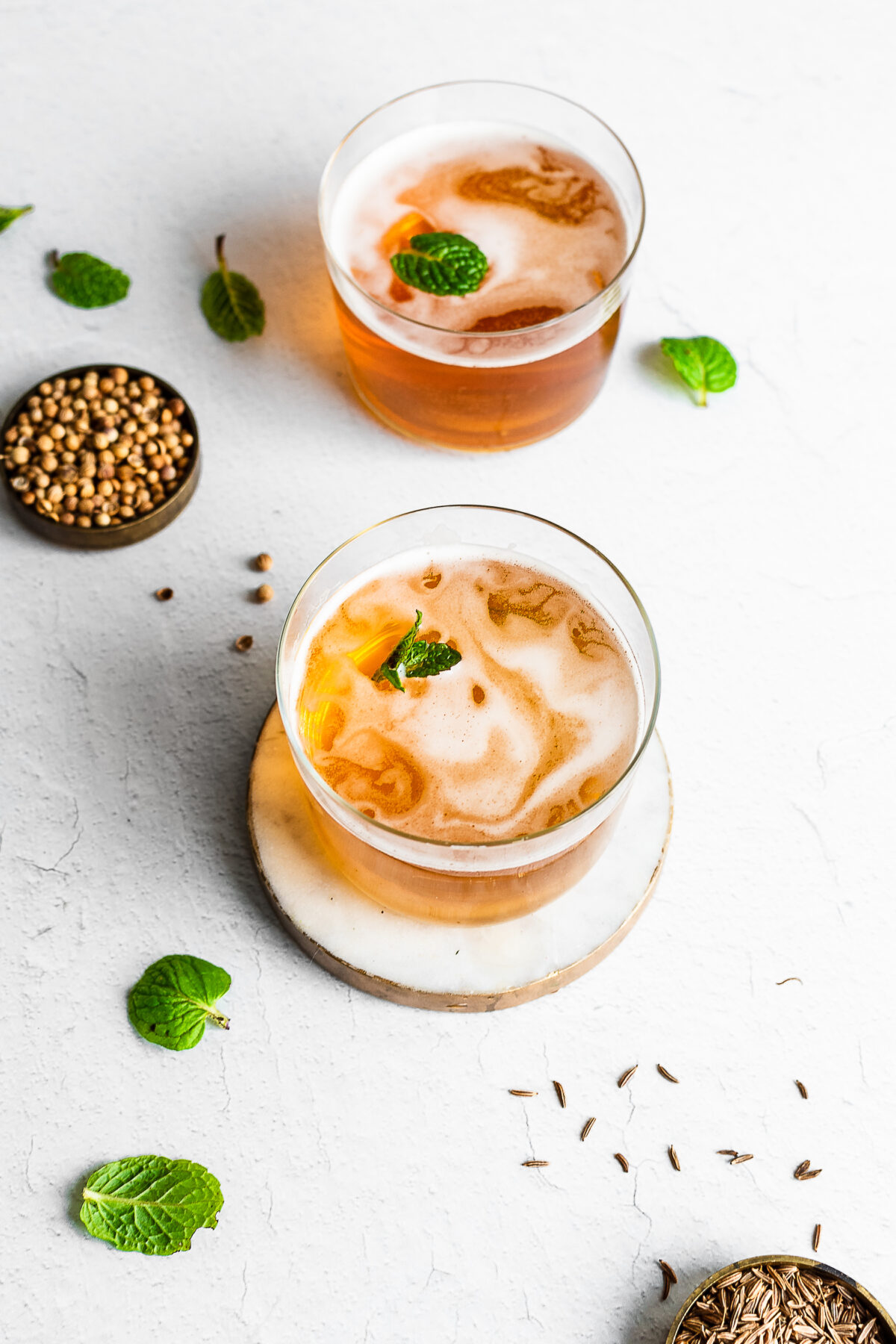 Kvass, a sweet, tart, and bubbly fermented drink made from bread and honey, is an ancient Eastern European staple. It's also surprisingly easy to make yourself. (Jennifer McGruther)
Food

Move Over, Kombucha—Kvass Is Here

Bubbly, refreshing, and good for your gut to boot, the traditional fermented drink is surprisingly easy to make at home
BY Jennifer McGruther TIMEMarch 25, 2022 PRINT

Beloved by health-conscious hipsters and yoga moms, kombucha skyrocketed from relative obscurity to a health food staple in the early 2000s.  Now, in 2022, it’s become so popular that you can buy it by the case at Costco, and you might even be able to find it at your local gas station.

If you’re unfamiliar, kombucha is a fermented tea that tastes like a cross between soda and apple cider vinegar. It’s a little sweet, decidedly sour, with a striking bubbliness, and it’s one of those foods you either love or hate with very little room for the in-between.

While kombucha’s one of the most recognizable naturally fermented drinks, due to both its popularity and availability, it’s just one example of many brewing traditions. There’s one drink that’s right on the heels of kombucha: kvass.

Little known outside of Eastern Europe, where it’s enormously popular, especially in the summertime, kvass is a naturally fermented drink that, like kombucha, is teeming with good-for-your-gut beneficial bacteria. It’s quickly finding a small, but eager market in the United States, too.

Like kombucha, kvass is a naturally fermented drink that’s sweet, tart, and bubbly. As with most fermented drinks, it contains trace amounts of alcohol—ranging from about 0.3 to 1.5 percent, depending on the strength of the brew. It’s also a good source of B vitamins, and rich in live cultures just like yogurt, sauerkraut, and other fermented foods and drinks.

What makes kvass special, though, is just how economical and easy it is to make. While kombucha requires the use of a special culture called a SCOBY (symbiotic culture of bacteria and yeast), which can often cost upwards of $30, kvass needs nothing more than stale bread, water, honey, and a little bit of yeast.

It’s a drink born of necessity: a desire to make use of every scrap and to save time while doing it. When fermented, the combination of water, honey, and stale bread produces a nutritious and refreshing drink that tastes like a cross between blonde beer and mead. There’s a distinct tartness and a light sweetness underpinned by notes of toasted caramel, and any herbs or spices you’ve added to the brew.

Kvass is an ancient drink, and one that has been a foundational aspect of Eastern European culinary traditions for more than 1,000 years. Certainly, an effort to minimize waste and use every scrap of food is at the foundation of kvass-making; that is, food that might otherwise go to waste would find a new life as a nutritious, refreshing drink. However, kvass also fulfilled another purpose: It kept people healthy.

Before the advent of water treatment facilities, waterborne illness could sicken whole communities. Even today, there are about 1.5 million deaths in the world each year due to lack of access to clean water. The United States isn’t immune. While it has one of the cleanest drinking water supplies in the world, about 7.5 million people get sick every year due to waterborne illness.

So you can imagine the severity of risk that dirty water posed to populations centuries ago. Fermented drinks proved a natural way to sanitize drinking water, and kvass is no exception. That’s because before fermenting, the water used in kvass was traditionally boiled, thus killing off potential pathogens. As a result, lightly fermented drinks proved safer to drink than water itself. This, and kvass’s pleasant flavor, made the drink a staple.

It became so popular that families would often make the drink daily, and it also featured prominently in community festivals and celebrations. One of the oldest references to the drink is in the chronicles of Prince Vladimir, who, in 989, offered food, honey, and bread kvass to the newly baptized to both celebrate and encourage the Christianization of Russia.

By the 19th century, kvass-making was a cottage industry. While plenty of families still fermented their own at home, a booming industry of kvass brewers (called kvasniks) saw wide varieties of the drink developed. Each brewer often specialized in a unique variety, with some adding toasted barley to the drink. Others added berries, apples, and pears. Mint and other herbs also proved popular additions. Today, kvass is still popular in Eastern Europe, and it’s growing in popularity in the United States, too, thanks to a surge of interest in fermented foods.

Stateside, beet kvass is particularly popular. It’s typically made with beets, water, a bit of salt, and sometimes a starter culture. Ginger and other spices often add flavor. Traditional bread kvass is also growing in popularity, too, and it’s easy to make. Here are recipes for both.

Like a cross between a blonde beer and mead, kvass is a refreshing fermented drink. It’s delicious served cold, with a sprig of fresh mint.

Heat the oven to 400 degrees F, and line a baking sheet with parchment paper.

Arrange the bread onto the parchment paper, and bake for 20 to 30 minutes, or until dark brown.

Drop the toasted rye bread into a jar with a tight-fitting lid, add the water, caraway, and coriander seeds, and then cover tightly. Allow the kvass to ferment for 3 days in a warm spot in your kitchen away from direct light.

Strain through a fine-mesh sieve or square of cheesecloth, pressing the liquid from the bread to extract as much as possible. Return the liquid to the jar, discarding the spent bread. Add the mint, honey, and sourdough starter.

Seal the jar and allow it to ferment for 2 days in a warm spot in your kitchen, away from light and direct heat.

Transfer the kvass into flip-top bottles, and let them ferment 1 day more. Then transfer to the fridge where it will keep up to 5 days. Serve cold with a sprig of mint.

This recipe originally appeared on Nourished Kitchen, and is reprinted with permission of the author.

Beet kvass is deeply earthy, richly pigmented, and an excellent tonic to promote good digestion and overall wellness. For a starter culture, use 2 tablespoons kombucha tea, whey from yogurt, or sourdough starter, or 1 package of commercial starter culture, such as those sold by Caldwell’s and Body Ecology.

Whisk the starter culture and sea salt into your water to make the brine.

Place the cubed beets into a quart-sized mason jar, and then pour the brine over the vegetables.

Seal the jar with an airlock or a tight-fitting lid, and allow the kvass to ferment 1 week, or until it tastes pleasantly sour.

Strain and serve immediately, or pour into bottles and store in the fridge up to 1 month.

This recipe originally appeared on Nourished Kitchen, and is reprinted with permission of the author.