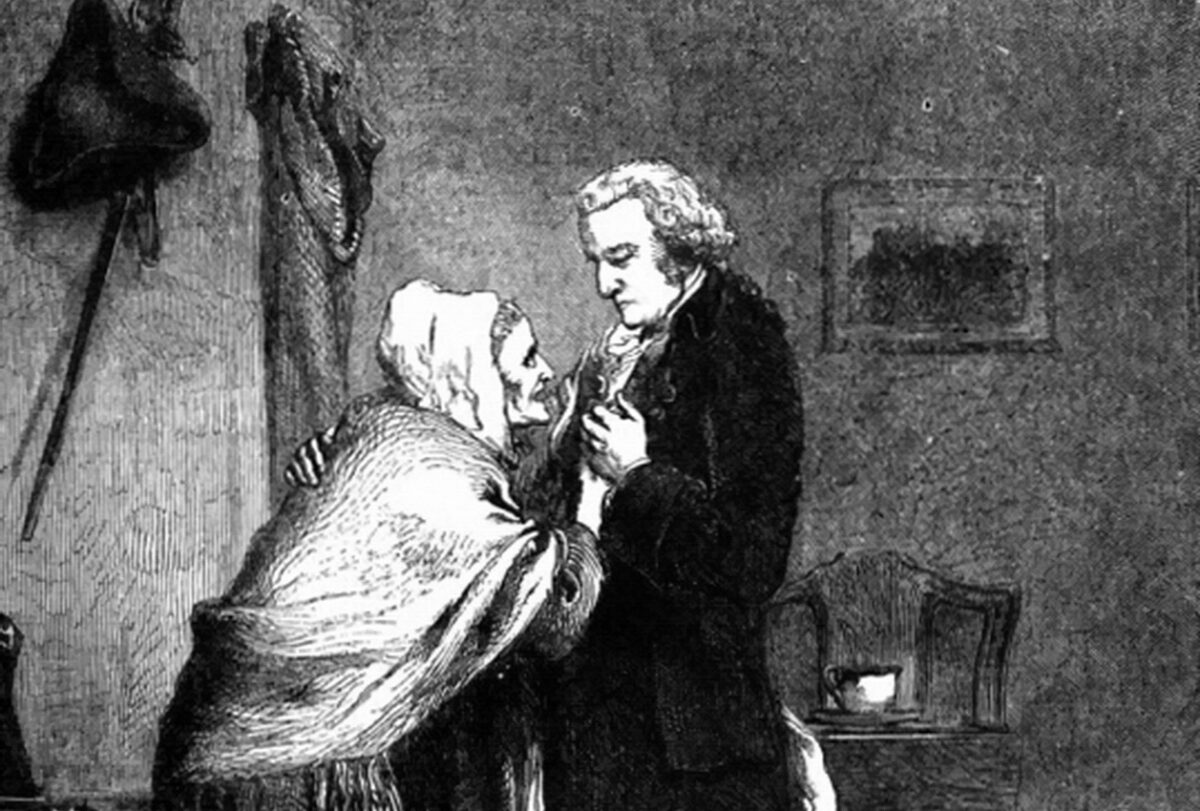 The hand that rocks the cradle
BY Jeff Minick TIMEJanuary 29, 2020 PRINT

If we look at his early life, George Washington (1732–1799) appears an unlikely candidate to lead an army against the British and earn the title “Father of His Country.”

In 1746, encouraged by his half-brother Lawrence as well as by others, 14-year-old Washington considered joining the British navy.  And in the French and Indian War (1756–1763), Washington served with the British against the French, fighting for Crown and Parliament at Fort Necessity, the first battle of the war, and surviving the disastrous defeat of General Braddock’s forces at Fort Duquesne, where four bullets passed through Washington’s cloak and two horses were shot from under him.

Washington was one of the richest men ever to be elected to the presidency, eclipsed only by John Kennedy and Donald Trump, with some of his fortune deriving from his marriage to the wealthy Martha Custis. At one point, he owned 50,000 acres of land.

A Leader of Rebels

Clearly, Washington had much to lose by entering into rebellion. So why did he become a revolutionary? Why take command of the American army and fight the British?

Some historians believe that Washington chafed under British rule for financial reasons, that Britain’s plans for America after the defeat of the French would limit the opportunities and westward growth of the colonies. Others contend that his four years of service in the British army during the French and Indian War caused him to resent the British for their arrogance and their contempt for the colonials.

And some historians argue that Washington’s mother bred in him a penchant for rebellion.

Orphaned at a young age, Mary Ball (1707?–1789) in 1731 married widower Augustine Washington. In addition to the three living children from Augustine’s first marriage, the Washingtons had six more children—George was the oldest, and the youngest died an infant. In 1743, Mary became a widow when Augustine died after complaining of stomach pains.

Unlike so many widows of her time, Mary Washington never remarried, choosing instead to raise her children and operate her properties alone. She focused much of her attention on Ferry Farm, a 276-acre plantation located near Fredericksburg, Virginia.

Mary’s responsibilities must have seemed crushing at times. She had to see to the upbringing and education of her many children, run a large farm, and manage the slaves who worked the land. She was not impoverished, but she lacked the means to provide George with a classical education like that attained by fellow Virginians Thomas Jefferson and James Madison, and was not a part of the upper echelon of Virginia society. In some ways, George may have benefited from these circumstances, learning at an early age to keep household accounts and operate a farm.

Mary was a pious woman who believed strongly in such concepts as duty and honor, and she passed these virtues to George by example and by instruction. We see in the son the mother’s character, described by Washington Irving as “strong plain sense, strict integrity, and an inflexible spirit of command.”

Historical Takes on the Widow Washington

After her death, George Washington’s first biographers paid Mary homage for her sacrifices and for her hand in the formation of George’s character. Later, other historians investigated her and cast Mary in a different light, describing her as crude, whiny, and self-centered. These were the historians who found Mary particularly overbearing and protective in her refusal to allow George to join the navy, and greedy in her later requests for money from him.

In a new biography “The Widow Washington: The Life of Mary Washington,” Martha Saxton takes a different view, pointing out the many similarities between mother and son: their love for the outdoors, their religious views, their careful attention to money matters, their stoicism, their sometimes prickly temper. She also shows us the rigors of Mary’s daily life and the obstacles as a single woman with which she had to contend.

Coincidentally, Craig Shirley, author of such books as “Reagan’s Revolution” and “Citizen Newt,” has also written a revisionist biography of Mary. In “Mary Ball Washington: The Untold Story of George Washington’s Mother,” he writes of Mary that “she is seen as a saint or a villain, nothing in between,” and then adds that “Mary’s seemingly contradictory character traits complimented each other. Mary’s kindness and control were one and the same.”

In several places in “Mary Ball Washington,” Shirley cites Lawrence Washington, George’s cousin, who offered this observation of Mary: “I was often there with George, his playmate, schoolmate, and young man’s companion. Of the mother I was ten times more afraid than of my own parents. She awed me in the midst of her kindness, for she was indeed truly kind … and even now, when time has whitened my locks, and I am the grandfather of a second generation, I could not behold that majestic woman without feelings it is impossible to describe.”

To answer those historians who believe that Mary’s influence was negative or inconsequential, Shirley directs us to a quote from George himself, that it was his mother by whose “Maternal hand (early deprived of a Father) I was led to Manhood.” He reinforces this evidence with another quote from George’s cousin Lawrence: “Whoever has seen that awe-inspiring air and manner so characteristic in the Father of his Country, will remember the matron as she appeared when the presiding genius of her well-ordered household, commanding and being obeyed.”

As a teenager, George may have felt constrained by his mother’s demands, though he also spent a large amount of time in the homes of his relatives. As an adult, he quarreled with Mary over control of Ferry Farm, which Augustine had left to him. He may have also felt removed from Mary when, like Thomas Jefferson’s mother, she refused to support the American Revolution.

On the other hand, in 1772 George purchased a house for his mother in Fredericksburg, where she lived until her death, and had water delivered to her daily from the “medicine springs” on Ferry Farm. In her will, Mary made George her chief executor and left him the bulk of her property. Such acts seem to indicate a bond of affection and trust.

Perhaps their tangled relationship is revealed, too, in the salutation with which Washington greeted Mary in their correspondence: “Honored Madam.” As Shirley points out, “This salutation served two purposes: it showed his respect for her while holding her at arm’s length.”

Martha Saxton’s words in “The Widow Washington” may sum up their relationship best of all: “Like mother, like son.”

On battlefields around the world, soldiers have cried out for their mothers as they lay dying. And memorably, Abraham Lincoln once said, “All that I am, or hope to be, I owe to my angel mother.” In our series “The Hand That Rocks the Cradle: Mothers and Sons,” we will look at a number of famous men strongly influenced by their mothers. Not all these women were angels, but their love, disposition, and sense of principle left an indelible stamp on their sons.