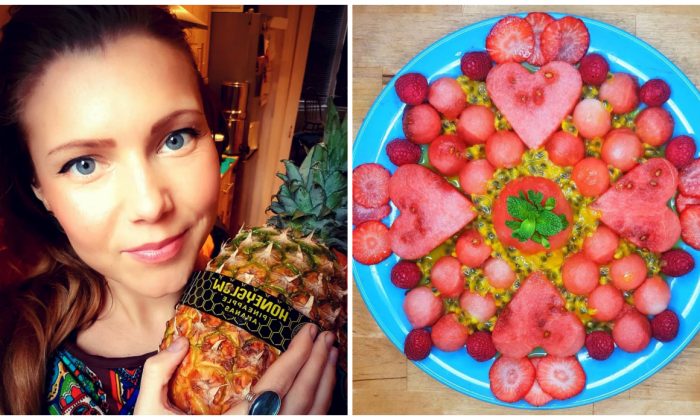 A young mother with just 5 percent normal kidney function attributes her good health to her raw, vegan, fruit-based diet. She needs less dialysis and is in better shape than others with a similar condition.

Polina Petruk, a 33-year-old mother in East Dulwich, London, was diagnosed with focal segmental glomerulosclerosis (FSGS), a rare kidney disease (pdf), back in 2007.

“I was told I have an #autoimmune condition whereby my body is attacking my kidneys … I would lose kidney function within 3 years, never have a child would need a transplant,” she wrote on her Instagram account, chronicling her journey.

So here is my story 🙏 I was told I have an #autoimmune condition whereby my body is attacking my kidneys 12 years ago… I would lose kidney function within 3 years, never have a child would need a transplant .-. Something inside me said NO and I decided to try natural therapies to help me. Because of that I had 12 years with my own kidneys and gave birth to Maya 💖 .-. Pregnancy was hard on my kidneys and I tried the #autoimmunepaleo protocol to heal. Unfortunately it had the opposite effect and I lost 80% of my kidney function in under a year .-. I went back to a plant based diet for the last 2 years, and my function has only declined 3%! If only I had stuck to what I intuitively knew… but health is a journey and this one is mine ❤🙏 .-. I have been on high fruit for the last 6 months or so and on the herbs for a year and I firmly believe that I can regenerate my kidneys. Normally someone with 5% function would need 12 hours of dialysis a week but I only require 5 🙏❤ .-. Healing is real, that belief is in every cell of my being, but regardless, this lifestyle has changed my life and has given me an understanding of the universe that I could have never imagined 🙏❤ ——————————————————————————— .-. 12 лет назад мне сказали доктора что у меня аутоиммунная болезнь почек. Незнали как и почему но сказали что через 3 года почек не будет, детей даже не мечтать и нужен будет трансплант .-. Ну что то во мне сказало НЕТ и я начала пробовать разные натуральные способы лечения. И вот я прожила со своими почками 12 лет и родила Маю 💖 .-. Беременность была сложная, и после я попыталась лечиться следуя #аутоиммунныйпротокол. Но случилось совсем не то, я потеряла 80% функции почек за год. Когда я вернулась к веганству то функция понизилась всего на 3% за 2 года!!! Если я бы осталась на #веган диете то может все было бы по-другому. Но это был мой путь .-. Я уже 6 месяцев на сырой диете и я всем своим телом чувствую что смогу излечить почки. Обычно людям с 5% функции нужно 12 часов диализа а я только делаю 5. Но даже если не получиться я всё равно благодарна за этот стиль жизни, он мне показал совсем другой мир ❤

She was appalled by the amount of drugs doctors prescribed for her condition, so she decided to take a proactive approach to improving her health.

Over the next few years, she tried a paleo “caveman” diet, vegetarianism, and veganism. She started experimenting with eliminating animal products then eating more raw food to see how it affected her and how many drugs she needed to take.

“Soon I realized I was starting to move better, my blood pressure was stabilizing, and my kidneys were filtering better,” she told The Mirror.

Throughout this process, she reduced and eventually stopped her prescription medicines, in consultation with her doctors. “Against all odds, I was living a normal life,” she said.

Barely Surviving the Ordeal of Childbirth

Doctors had warned her against conceiving, saying her kidneys would not be able to cope with the additional stress.

“Pregnancy was hard on my kidneys and I tried the #autoimmunepaleo protocol to heal. Unfortunately it had the opposite effect and I lost 80% of my kidney function in under a year,” she wrote on Instagram.

Doctors planned a cesarean section at 37 weeks, and she successfully gave birth to her daughter, Maia.

“[A]lthough she was small and cold and grumpy, medically she was fine and we were allowed home with her two weeks later,” Petruk told The Mirror. “I am convinced that following a plant-based diet was what allowed me to give birth to her despite my dire diagnosis.”

Her kidneys continued to deteriorate, until she needed four hour-long dialysis sessions three times per week. At that time, her kidneys were functioning at just 5 percent.

Once again, she was determined to improve her health by changing what she ate. “I’d done it before, used my diet to improve my kidney function and I knew I could do it again,” she said.

In 2016, Petruk started including more raw foods in her diet. Now she eats primarily fruit. “I also eat vegetables and nuts but they make up a small percentage of my diet. I am a raw vegan though,” she wrote to The Epoch Times. She also eats seaweed and supplements.

Her health kept improving and today she receives four hours of dialysis per week, and her blood test results are similar to someone who is getting three times as much treatment.

Discipline and Commitment Are Key

These days, Petruk eats six or seven small fruit-based meals per day, while making sure she has enough calories to sustain her energy. The most important aspect of a diet like hers, she said, is to ensure you eat enough calories. She uses a phone app to track everything she eats.

Petruk leads an active social life, and she doesn’t let her diet stop her. Instead, when she goes out with friends she brings her own food. For example, she might bring salad dressing made from mango, avocado and salt, and asks the restaurant for “whatever raw veg and leaves they have in the kitchen.”

She seeks to inspire others with her story, sharing her inner change as well as her outer change: “I think that intention is so powerful it can really give you motivation and keep you focused. My intention is to show commitment to change. Resistance to change is one of the things that I believe have held me back,” she wrote on Instagram.

She advises anyone who wants to follow her diet to take things one step at a time.

“I do not recommend that people eat like I do straight away. It took me seven years to get to my diet. Reducing processed foods and animal based foods [will bring] the main health benefit,” she told The Epoch Times.

Petruk said kidney patients should monitor their potassium levels, and ensure they eat fruits and vegetables that are low in potassium.

She is currently studying nutrition at London’s College of Naturopathic Medicine.