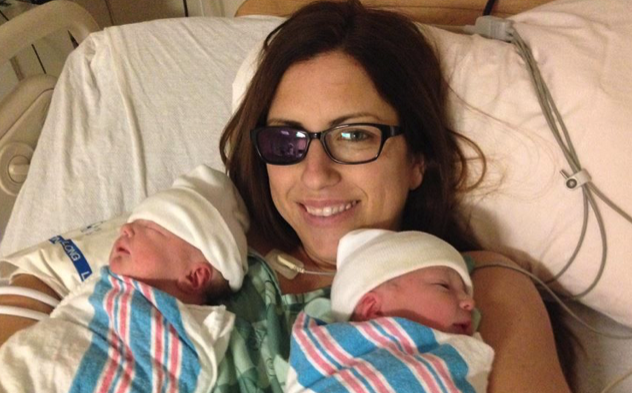 Jessica Boesmiller, 37, gave birth to two healthy twins on Dec. 21 after having an eye removed weeks earlier because of a dangerous tumor. (Photo via GoFundMe)
Health News

A North Carolina mother of four diagnosed with a dangerous eye cancer when eight months pregnant, gave birth to healthy twins despite concerns the disease might spread to the babies.

“Blessed Joy and thankfulness. That is what I felt when I found out the twins’ placentas were negative for melanoma,” wrote Jessica Boesmiller, 37, in a Dec. 29 social media post.

“Twins are negative for this evilness that is called cancer.”

While the cancer has not affected the infants, Jessica, her two sons, and husband await the results of a further medical tests to see if the cancer has spread to other parts of her body.

“Anxious. That is what I feel going into my scans tomorrow at Duke. The waiting will be so long as we wait for the results. Wednesday in another Duke followup we will find out the details of the tumor, its class and its likelihood of metastasis in the future if given the miracle that the scans are clear now,” wrote Jessica in the post on the Facebook page dedicated to sharing information on her fight with cancer.

After complaining of blurred vision in November 2017, Jessica went to see an eye doctor.

The diagnosis was unexpected.

“I thought I may have to get some glasses—not be told I have cancer.”

She was diagnosed with ocular melanoma, a life-threatening form of cancer, and the recommended treatment was complete removal of her eye.

Doctors were concerned that the cancer might spread to other parts of her body and to the babies.

“Prayers for these babies—as melanoma is one of the few cancers that can affect the placenta,” Jessica wrote.

The procedure took place at Duke Hospital in Durham, North Carolina, U.S., more than two hours away from their home in Cornelius, near Charlotte.

Breaking the news of the upcoming surgery to their two children was a challenge.

Mark Boesmiller, an army veteran and North Carolina firefighter, said it was a process to get their two older sons Caleb, 7, and Conner, 9, mentally prepared for what was to come.

The former airborne paratrooper showed his sons how eye prosthetics work and eventually got “the boys thinking it was going to be so cool to have a pirate mommy wearing an eyepatch for the next several months,” the resourceful dad wrote.

“She then proudly sported the leather eyepatch with Scottish Rampant lion I found for her yesterday at the Renaissance Faire,” said Mark.

Ocular melanoma is a cancerous tumor that develops in the pigment cells that give color to the eyes.

The malignant tumor grows from the middle layer of the eye that cannot be seen in the mirror, so it is difficult to detect.

It is a rare disease that only affects about 2,500 adults in the U.S. each year, but is potentially lethal.

Ocular melanoma kills about half of those diagnosed, especially if it spreads to the liver.

The couple’s decision to remove the eye on Nov. 30, several weeks before the birth, ensured the least amount of harm to the babies, the Daily Mail reported.

This would give Jessica enough time to recover and prepare for the arrival of the twins.

Tests show the babies are free of cancer.

A GoFundMe has been created by family and friends to help cover the couple’s extraordinary expenses.

While she gets used to life wearing her eye patch and two new babies, she awaits test results to see if the cancer has spread.

If so, she will work with doctors to chart out another treatment.

“If it’s somewhere else, we’ll start another path of getting rid of that one,” she reportedly said.