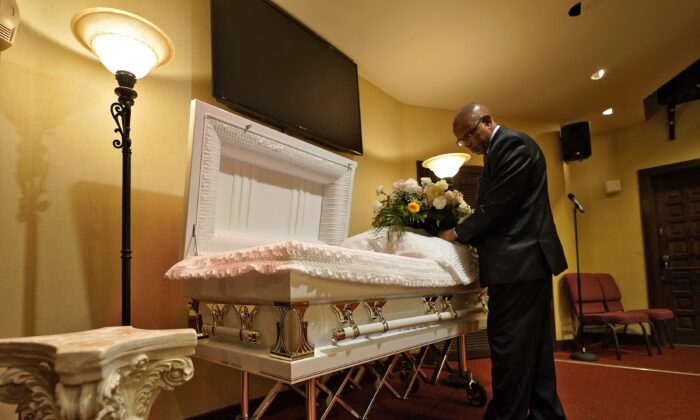 A funeral director arranges flowers on a casket before a service in Tampa, Fla., on Sept. 2, 2021. (Chris O'Meara/AP Photo)
AMERICA

More Than 140,000 US Children Had Parents, Grandparents Die During Pandemic: Study

More than 140,000 children in the United States have experienced the loss of a parent or a grandparent during the COVID-19 pandemic, according to newly published research.

Researchers reviewed fertility data, death rates, and information on household composition for the study. They estimated that between April 1, 2020, and June 30, more than 140,000 children lost a parent, a custodial grandparent, or a grandparent who lived with them.

“The lives of these children are permanently changed by the deaths of their mothers, fathers, or grandparents who provided their homes, needs, and care,” researchers wrote in the study (pdf), which was published in Pediatrics.

Most of the children who lost a parent or grandparent were Hispanic or black. About 35 percent of them were white.

“Children facing orphanhood as a result of COVID is a hidden, global pandemic that has sadly not spared the United States,” Susan Hillis, a Centers for Disease Control and Prevention (CDC) researcher and co-lead author of the study, said in a statement.

Hillis called for boosting efforts to address the losses that children have experienced.

Researchers used the term “orphanhood” to refer to children who have lost at least one parent or grandparent.

“The magnitude of young people affected is a sobering reminder of the devastating impact of the past 18 months,” said Dr. Alexandra Blenkinsop of Imperial College London, the co-lead researcher of the study. “These findings really highlight those children who have been left most vulnerable by the pandemic, and where additional resources should be directed.”

The new study comes about six months after a separate group of researchers estimated that 37,300 children up to 17 years of age have lost at least one parent due to COVID-19 through February. It also comes during the same week that new figures show more people have died in the United States from COVID-19 in 2021 than in all of 2020.