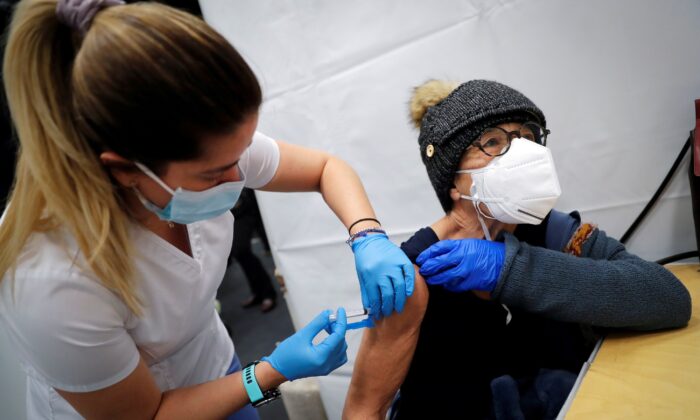 A healthcare worker administers a shot of a COVID-19 vaccine to a woman in Manhattan, New York City on Jan. 29, 2021. (Mike Segar/Reuters)
Vaccines & Safety

People who received the Moderna COVID-19 vaccine reported more side effects than those who got the Pfizer/BioNTech shot, according to a recent study by the Centers for Disease Control and Prevention (CDC).

The study—published online in the Journal of the American Medical Association (JAMA) on April 5—looked at data collected from over 3 million participants vaccinated from Dec. 14, 2020, through Feb. 28, 2021, in the CDC’s v-safe active surveillance system. However, only 1,920,872 participants reported getting the second vaccine dose.

More than 46 million Americans had gotten at least one dose of the vaccine by Feb. 21.

The participants were asked about their “postvaccination experience,” including occurrences of adverse events within seven days after being vaccinated. The report included only local or systemic reactions and did not include severe side effects like anaphylactic shock, which will be addressed in a later study.

Of those who received one dose of the messenger RNA vaccine, 74 percent of Moderna recipients reported injection site reactions of pain, swelling, redness, and itching, as opposed to 65.4 percent of the Pfizer/BioNTech recipients.

Furthermore, 52 percent of those who received the Moderna vaccine said they had a generalized reaction like fatigue, headache, and body pain, compared to 48 percent of recipients who had the Pfizer/BioNTech vaccine.

“For both doses of both vaccines, the percentage of v-safe participants who reported local and systemic reactions was highest on day 1 after vaccination and declined markedly through day 7,” the authors said.

In addition, people aged 65 and older were less likely to experience adverse reactions than those younger than 65, regardless of which vaccine was given.

Dr. Anthony Fauci, director of the National Institute of Allergy and Infectious Diseases (NIAID), said that most adverse reactions occur between 15 to 45 days following vaccination.

“It’s very, very, very unlikely that you’re going to have an effect, 5 or 10 years down the pike,” Fauci said in an interview on March 13. “The reason we say that is that we have decades of experience in the field of vaccinology and virtually all of the effects if they even occur, and they’re very rare, occur within 15 to 45 days following the dose.”

Fauci was addressing concerns of whether people may file a lawsuit against the vaccine manufacturers if they experience adverse reactions five or 10 years after receiving an inoculation. He said that there is a “fund that allows the compensation for injury.”

Pharmaceutical companies are granted immunity from liability by the federal government under the Public Readiness and Emergency Preparedness (PREP) Act (pdf) that was passed in 2005.

People injured or who die from a COVID-19 vaccine must instead file a claim and prove their injury or death within a year after receiving the shot under the Countermeasures Injury Compensation Program, a federal government program established as a result of the PREP Act.

Two days after the publication of the CDC study, the NIAID announced that it was funding a Phase 2 trial to examine whether people with a history of allergic reactions or who have a mast cell disorder are at increased risk of an immediate, systemic allergic reaction to the Moderna or Pfizer/BioNTech COVID-19 vaccines.

“The public understandably has been concerned about reports of rare, severe allergic reactions to the Moderna and Pfizer-BioNTech COVID-19 vaccines,” Fauci said in a statement. “The information gathered during this trial will help doctors advise people who are highly allergic or have a mast cell disorder about the risks and benefits of receiving these two vaccines.”

Signs of severe allergic reactions include throat tightness, nausea, dizziness, agitation, and a sudden increase in secretions from the eyes, nose, or mouth.

Symptoms of anaphylaxis often occur within 15 to 30 minutes of vaccination, though it can sometimes take several hours for symptoms to appear.