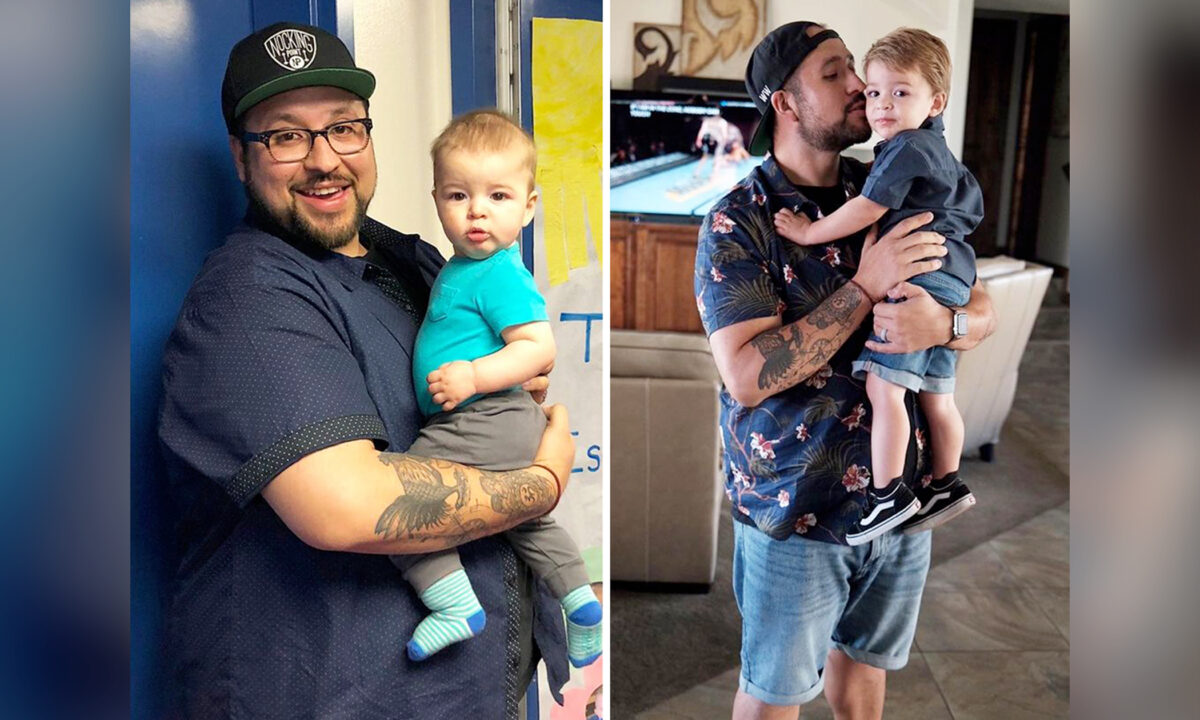 Overweight since childhood and peaking at 406 pounds (184 kg), a California native had all but given up on weight loss until his son was born. It was then he realized that getting healthy, albeit the hardest thing he would ever do, was a choice.

And he made the choice for his son.

Tony Reyes of Anaheim is the creative director of a fitness company. Yet, once the “fat, funny guy,” he admits he used to hate himself.

“When you’re morbidly obese, there’s a lot of things that you just cannot do,” Tony, 34, told The Epoch Times. “It was just a whole life of being told I was either too big for this, or I needed to buy two seats, or I couldn’t fit on this ride, or I couldn’t sit in that chair.”

“Some of the darkest times of my life were when I was at my heaviest, and I’m very thankful I made it through,” Tony added.

As a child, Tony picked up bad food habits at his doting Mexican grandparents’ house, eating refried beans, candy, and carbs to his heart’s content. He started gaining weight in first grade and later faced bullying through his school years.

“I had to get very, very good at defending myself,” he recalled.

Some of the bullying experiences from his childhood left such a deep impression on him that it has still stuck with him over the years.

Tired of being the “fat one,” Tony dropped out of every sports team his parents encouraged him into. His weight ballooned in college and spiraled out of control after both his grandmother and best friend passed away just two months apart.

At his lowest ebb, Tony took to eating junk food alone in his car, wasn’t able to stick to a diet plan, and was on the verge of a medical crisis.

“I was prediabetic, I had a fatty liver, I had really high cholesterol, high blood pressure, you name it; my body was not good,” he explained.

Tony’s doctors warned him that if he didn’t make a much-needed change to his lifestyle, he would die prematurely. His worried mom, a nurse, echoed the warning.

With a history of multiple uncles and his grandfather all passing away from heart disease, Tony was scared.

Meanwhile, with his 400-pound frame crushing his lungs as he lay in bed, he also developed dangerous sleep apnea. He was put on a CPAP oxygen ventilator.

Tony’s future looked bleak. That is until his baby son, Ryder, was born.

“When he was born, I was just like, ‘I cannot be an obese dad,'” Tony said. “I had this nightmare of going to pick my son up from school, and his friends making fun of him for having a fat dad the way that kids made fun of me. I didn’t want him to go through that … that was a major, major driving force in my starting to lose weight.”

“If you’re 406 pounds, you don’t need a diet, you need a life change!” Tony asserts in a video montage for Power of Positivity with over 200,000 views.

“I was just like, I’m gonna go straight back to basics,” he explained to The Epoch Times. “From the amount of chicken I put into my lunch to the amount of honey I put in my oatmeal, I weighed and tracked everything.”

He rose at 4 a.m. each day and began a two-hour workout at 4.30 a.m. at the gym, before helping with Ryder and driving from Orange County to L.A, where he worked in advertising, for a workday start of 9 a.m. From high-intensity cardio to yoga, he exercised six days a week and exceeded his goal, losing 61 pounds (28 kg) in 100 days.

Motivated like never before, Tony started sharing his fitness journey on social media. A video on binge eating—Tony’s “biggest demon”—posted on YouTube received an outpouring of support and, from there, his online presence grew steadily.

While “getting out of 300 pounds [136 kg] was huge,” Tony claims the real work started after six months when the rapid weight loss slowed down. He shifted his focus to physical challenges and signed up for a 26-mile marathon in December 2020.

Although the pandemic restricted his 5-kilometer and 10-kilometer practice races, Tony was undeterred and decided to run them on his own. Finishing the latter on the beach—in the rain, the dark, and the cold—became one of Tony’s proudest moments.

“I was so excited and so happy … I just screamed,” he said. “That scream came from such a real, guttural place; it fires me up every time I think about it.”

Bearing through a foot injury, Tony “jog-walked” his way across the December marathon finish line with his wife, sister, and friend in tow.

“I felt unstoppable,” he said, looking back. “I felt like if I can lose 160 pounds and go from being morbidly obese to running a marathon, what can’t I do? I just felt this really powerful sense of self-worth and confidence that I had faked for most of my life.

“If I’ve learned anything from this journey, it’s if you don’t want it yourself, more than anything else, no one’s going to talk you into losing weight,” he reflected, claiming his success has encouraged family members to adopt healthier lifestyles, and will hopefully make sense to his son one day.

“He just turned 3,” Tony said. “Maybe one day, and especially when he becomes a father, he’ll understand why I was so motivated as a father to do anything I could to live longer, to see him grow.”

Tony continues to share his journey, tips, and insights on Facebook and Instagram. He hopes that others will take inspiration to have “real, open, honest, and raw conversations” with themselves, and “strap in for the long haul,” as a healthy lifestyle is a life-long commitment.

“I have never been athletic,” he said “I just decided one day that it was enough; it was like a switch flipped in my mind … every single person is capable of making that change.”

Tony still feels unstoppable. His next ambition is to complete an Ironman Triathlon, and he feels “100 percent certain” that he can finish it.

The fighting-fit father’s philosophy remains: “When I do eventually die, I meet the person who I could have been, the highest potential version of myself, and as long as that guy is not a complete stranger to me … I’m never going to be that guy,” he clarified, “but, I want to be as close as possible to that guy as I can be.”

Watch Tony’s Extraordinary Journey in the Video Below: