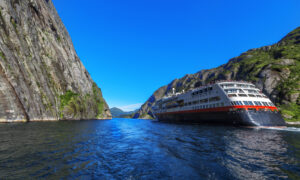 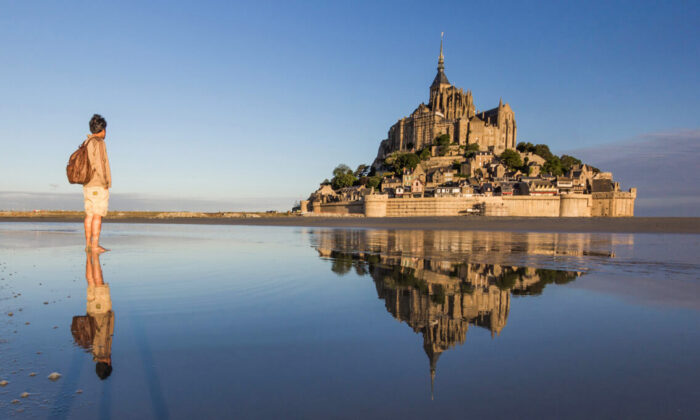 Mont-St-Michel: The French Island Whose Origins Are Steeped in Legends and Dreams

Rising from the sea like something from a fairy tale, Mont-Saint-Michel challenges your sense of reality. An island that’s sometimes not an island. A geological wonder that’s also a geographic oddity. A fortress and an abbey and a UNESCO World Heritage Site. At high tide, the whole place seems to hover over the water, and when it’s out, the seemingly impregnable surroundings become a sandy stretch explored by the curious and the brave. But one thing is certain: When you arrive and see it for the first time—ramparts, stonework, and buildings that seem to grow right out of the granite, all crowned by a soaring steeple capped by an angel—you won’t quite believe your eyes.

Situated in the English Channel just off France’s Normandy coast, a visit here will take you back some 1,300 years. It’s currently home to fewer than 50 people, mostly monks and nuns who reside in the abbey. Once you arrive, go wander (and maybe get lost). Enter through the King’s Gate and make your way through the shops and cafes along the Grande Rue. Sit and soak up the haunting sound of a hymn in the abbey. Be still, and watch the transformation created by the tides.

And it all started with a dream—actually, three—or so the legend goes. They say that back in the early eighth century, the archangel Michael (Michel, in French) appeared to Aubert, the bishop of Avranches, in his sleep. Twice, Michael told the man to establish a sanctuary in his name on what was then known as Monte-Tombe. The third time, he drove home the point, poking his finger into the bishop’s skull. Aubert responded, sending messengers to bring back the relics of the archangel from Italy, then dedicated the sanctuary in the year 709. (As a side trip, it’s worth checking out the Church of Saint-Gervais in Avranches, which has preserved the skull of Aubert, complete with its hole.)

Pilgrims followed, and layer upon layer, the place grew. In 966, the Duke of Normandy established a commune of Benedictine monks. By 1000, they had built the Church of Notre-Dame-sous-Terre, now under the nave of the current abbey, and a place you can still visit. Kings of both France and England came here. The Gothic Merveille was created by medieval builders in the 13th century. Le Mont was a bastion, never captured during the Hundred Years War (1337–1453), repelling invaders with just a handful of knights on hand during furious sieges. And it was a prison, too, from the 17th to the 19th century.

Now it’s a place to explore, starting with a closer examination of shifting worlds created by those tides. At low tide, the water recedes out to sea, meaning you can actually walk over, and all around, on dry land. But while predictable, they can also be treacherous—anyone on the island will readily tell you stories about overzealous adventurers who didn’t watch their time and ended up in a bad spot. Some of Europe’s most dramatic tides, rushing in at 200 feet per minute and rising as much as 45 feet, also create pools of quicksand that can trap the unwary. Fortunately, you can book a walking tour with a guide who is well aware of all the factors at play. Doing so is a cool opportunity to get a new perspective on the island, looking up from its base, over the ramparts, to the golden figure of Michael, at more than 300 feet high, triumphing over a dragon.

Mont-St-Michel is also home to some worthwhile museums, including one dedicated to local maritime culture and ecology, and an “archeoscope,” a multimedia show based on the history and whimsical stories here. It’s also a great spot for souvenir hunting, a tradition that dates back to the days of the pilgrims. And make sure to take your time when you visit the abbey.

Make your way along the winding streets in town to the top of the mount, proceeding inside after paying the entrance fee of 10 euros (about $12). A walk-through will take you through the centuries of construction, blending a wide spectrum of styles. But you’ll marvel at the Merveille. A gothic wonder that includes three layered levels and 16 buttresses, this crown jewel of the abbey was built during the power and prosperity of 13th-century Normandy. This section took 17 years to construct and rises 115 feet. Each floor serves a unique purpose—on the lowest, the chaplaincy met weary pilgrims arriving at their destination. On the second, a dining hall where fireplaces once warded off the chilly night air. On top, the cloisters and the monks’ refectory.

You can tarry, inspecting the fine handiwork, the result of centuries of painstaking labor to achieve this masterpiece. And when at last you must go, be careful. Shifting sands and rising tides may accompany your departure from Mont-St-Michel.

When to Go: Summer is high season; visit from March to October for good weather.

Safety: Keep watch on some of Europe’s most dramatic tides, which while predictable, can be treacherous. There is the option of booking a walking tour with a guide.

Getting There: Fly to Paris, where you can rent a car or take a 4-hour train ride to Saint-Malo.

Accommodations: The seaside city offers everything from budget B&Bs to the regal Le Grand Hotel des Thermes, and many restaurants offer top-notch seafood. Make sure to enjoy the famous omelette at La Mère Poulard.

Side Trips: The D-Day landing beaches are less than two hours away by car. Visit Omaha, Utah, Juno, Gold and Sword, plus Pegasus Bridge and Saint-Mere-Eglise, and a series of excellent museums along the way. And in Bayeux, stop in to see the famed tapestry, stretching more than 200 feet and telling the story of the Norman Conquest in 1066.