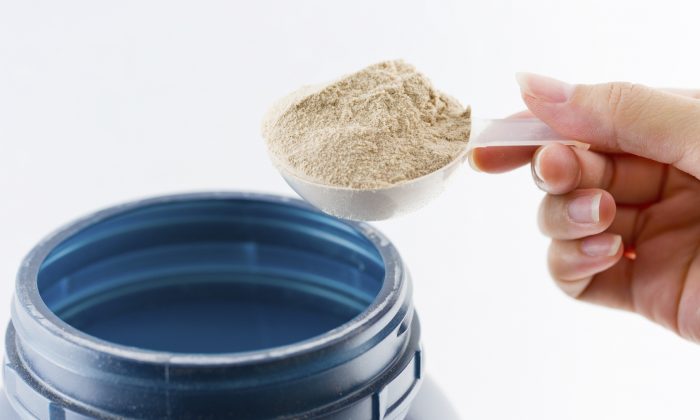 An Australian mother is warning others about the potential dangers of protein supplements and shakes after her female bodybuilder daughter apparently died.

Michelle White said her daughter, Meegan Hefford, developed an unhealthy obsession with fitness after having her second child.

“She suffered crippling post-natal depression,” White wrote for The Daily Mirror on July 14. “After seeing a doctor, she was prescribed some medication, which helped—but there was a catch. The tablets made Meegan gain a stone [14 pounds] in weight.”

White said she was originally supportive of her 25-year-old daughter’s attempts to get fit, but she said it became unhealthy after Hefford got involved in bodybuilding competitions, requiring her to stay on a strict diet and maximize her protein intake.

She told the publication each meal required having protein shakes along with a number of different supplements.

“She was winning trophies for her sculpted physique, but one morning when I popped round to see her and the kids I noticed her hands shaking as she downed yet another protein shake with her bodybuilding supplements,” White told the Mirror.

White recalled the moment she got a devastating phone call from paramedics who responded to her daughter.

“By chance, two women doing a rental inspection had found her unresponsive on the floor of her bedroom,” White told the outlet. “I rushed to the hospital to see my usually healthy and fit girl lying on a bed covered in wires.”

White said Hefford was eventually declared brain dead, and she was told that the woman had an undiagnosed genetic condition that affected the way her body handled protein: Urea Cycle Disorder.

According to the National Urea Cycle Disorders Foundation, suffers of the disorder have a building up ammonia in the bloodstream, which can cause brain damage. It says ammonia can reach “the brain through the blood, where it can cause irreversible brain damage, coma and/or death.”

After describing her daughter’s last moments alive, White said that she also has the same disorder along with Hefford’s daughter, Alexa.

“Luckily, if diagnosed it can be controlled with medication and diet, so what happened to my daughter won’t happen to her little girl,” she said.

White recalled finding a diet plan belonging to her daughter that was created by her personal trainer that was filled with protein.

“I also found protein supplements in her kitchen cupboards,” she said, adding that protein powders also contain “hidden chemicals” including “lead, arsenic, cadmium, mercury, pesticides, and other substances” that are linked to adverse health conditions.

She added that before her death, “I thought she looked healthier than ever, so didn’t think twice about the diet.”

“It all seemed like healthy food to me, as she ate plenty but shunned anything sugary,” she explained.