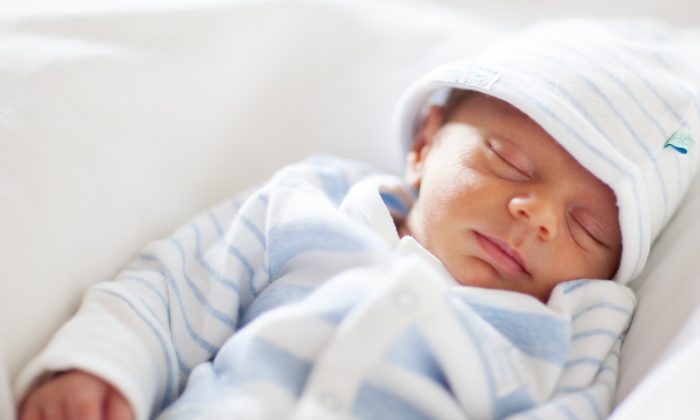 A young mom from the UK was left devastated after waking up to find her 8-day-old son had died in her arms after they fell asleep together on the couch.

Chelsea Love, 24, had just taken her newborn son, Leo, out of his bouncy chair after she noticed he was falling asleep.

The exhausted mom from north Hull then placed Leo on his back on her chest for a cuddle, then accidentally fell asleep herself, with the baby snuggled up next to her, according to Hull Daily Mail.

An hour later, she was frantically woken up by Leo’s father, Sam Coles, who noticed their son had changed color.

Leo was rushed to the Hull Royal Infirmary, where the doctors desperately tried to save him. They managed to restart his heart and transferred the baby to Leeds hospital for specialist treatment.

During treatment, CT scans showed Leo had suffered extensive brain damage and would never recover. He died on Oct. 26, last year, after his parents made the heartbreaking decision to turn off his life support.

One year later, Love would like to share her story with other mothers to raise awareness about the dangers of co-sleeping with a child.

It Could Happen to Anyone

“This could have happened to anyone, but I felt people really looked down on me at the time,” Love told Hull Daily Mail.

“I have had people making horrible remarks and tipping rubbish in my garden where my little girl plays after they read about Leo’s death in the paper. It was awful. I have been doing my driving lessons and I am working towards becoming a support worker myself,” she said.

“I really want to help people who have been in the same situation as me as I don’t think there is enough support out there,” she added.

Love said she was left “broken” after Leo’s death, but her two-year-old daughter has been helping her through the pain.

“If I didn’t have my little girl I don’t know what I would have done, she has helped us all through it,” Love said.

“Although she is only two, she knows all about Leo and can say his name. We always look up at the stars before she goes to bed every night and say night night to him,” she told the newspaper.

Cause of Death Never Determined

An inquest into Leo’s death was held on Nov. 23, but it was unable to determine the cause of his death, according to Hull Daily Mail.

“No medical cause of death can be determined and the cause of death remains unascertained. I am sorry we can not provide you with the answers you need as to why Leo died. The only conclusion I can return is an open conclusion,” Professor Paul Marks told the inquest.

Co-sleeping is a highly controversial subject, and the lack of a definitive conclusion in this case illustrates the point.

According to the Pediatric Sleep Center at Weill Cornell, research shows that Sudden Infant Death Syndrome (SIDS) happens more commonly in families where parents were sleeping with infants in the same bed. The center therefore advises parents not to co-sleep during their baby’s first year of life. After that, center director Haviva Veler says there’s no evidence that the practice is physically harmful.