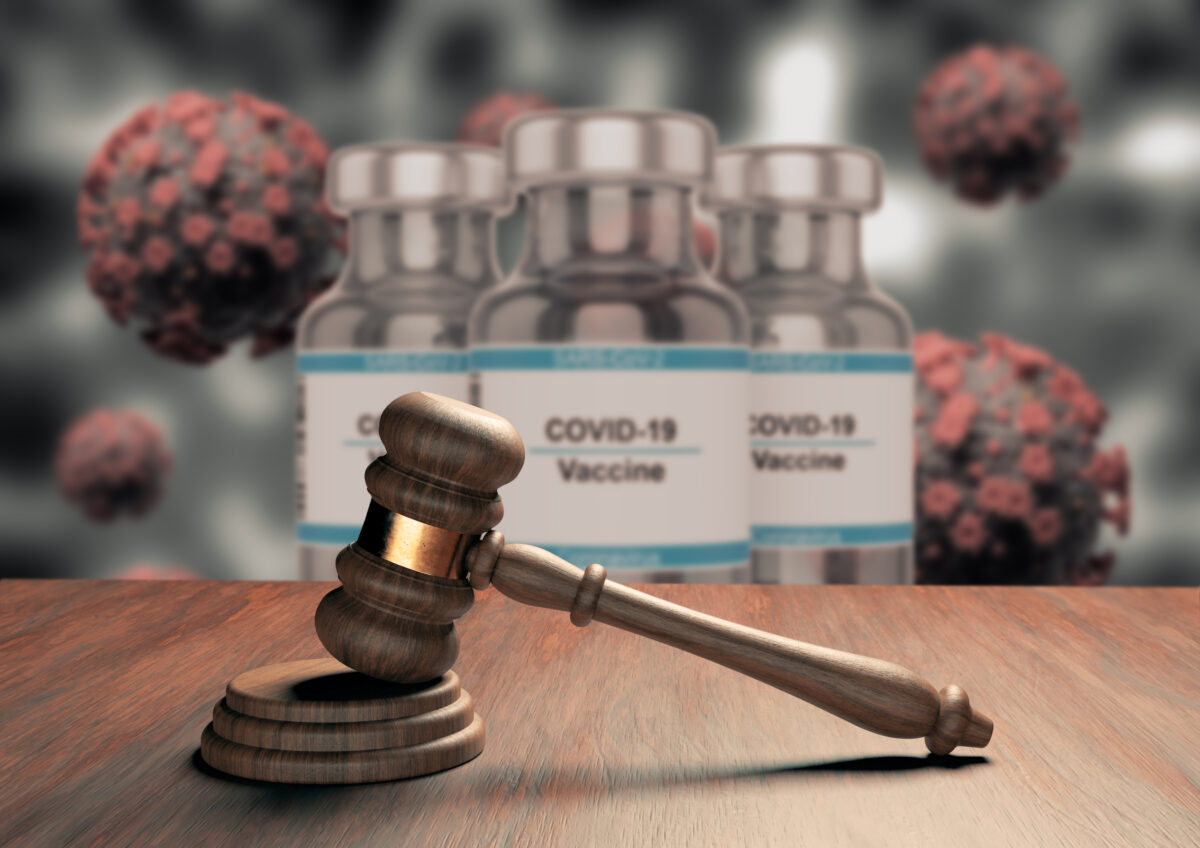 News of the lawsuit came amidst a recent report, on Aug. 24, that the U.S. Food and Drug Administration is likely to approve updated versions of both the Pfizer-BioNTech and Moderna COVID-19 boosters. (Adao/Shutterstock)
Health Viewpoints

Moderna yesterday filed patent infringement lawsuits against Pfizer and BioNTech, alleging the two companies copied Moderna’s patented mRNA technology. However, in an interview with The Defender, Dr. Robert Malone said the patents are derived from his own work on mRNA technology and they are now expired.

Moderna yesterday filed patent infringement lawsuits against Pfizer and BioNTech, alleging the two companies copied Moderna’s patented mRNA technology and claiming neither of the companies possessed the necessary know-how to have produced the Pfizer-BioNTech mRNA COVID-19 vaccine on their own.

In a statement, Moderna alleged the two companies infringed on patents Moderna filed between 2010 and 2016.

Moderna, based in Cambridge, Mass., filed its lawsuit against Pfizer in the U.S. District Court for the District of Massachusetts. It sued Germany-based BioNTech in the Regional Court of Düsseldorf, Germany.

Though Moderna has been in existence for only a decade, the company is considered “an innovator in the messenger RNA (mRNA) vaccine technology that enabled the unprecedented speed in developing the COVID-19 vaccine,” according to Reuters.

However, in an interview with The Defender, Dr. Robert Malone, who helped develop the mRNA technology used in COVID-19 vaccines and who has become an outspoken critic of the vaccines and pandemic countermeasures, suggested the Moderna lawsuit may represent only the tip of the iceberg, in relation to legal disputes over patents.

Remarking on the lawsuit, Moderna CEO Stéphane Bancel said in a statement:

“We are filing these lawsuits to protect the innovative mRNA technology platform that we pioneered, invested billions of dollars in creating, and patented during the decade preceding the COVID-19 pandemic.

“This foundational platform, which we began building in 2010, along with our patented work on coronaviruses in 2015 and 2016, enabled us to produce a safe and highly effective Covid-19 vaccine in record time after the pandemic struck.”

According to the statement, “Pfizer and BioNTech copied two key features of Moderna’s patented technologies which are critical to the success of mRNA vaccines.”

The BBC explained that one type of infringement alleged by Moderna involves “an mRNA structure that Moderna says its scientists began developing in 2010 and were the first to validate in human trials in 2015.”

The second infringement claimed by Moderna “involves the coding of the spike protein on the outside of the [COVID-19] virus itself,” the BBC reported.

“When COVID-19 emerged, neither Pfizer nor BioNTech had Moderna’s level of experience with developing mRNA vaccines for infectious diseases, and they knowingly followed Moderna’s lead in developing their own vaccine,” Moderna claimed in its statement.

Moderna also claimed Pfizer and BioNTech tested candidate COVID-19 vaccines that did not use technology Moderna claims violates its copyright, but ultimately opted not to develop them.

“Pfizer and BioNTech, however, ultimately decided to proceed with a vaccine that has the same exact mRNA chemical modification to its vaccine as Spikevax®.”

“Second, and again despite having many different options, Pfizer and BioNTech copied Moderna’s approach to encode for the full-length spike protein in a lipid nanoparticle formulation for a coronavirus.

“Moderna scientists developed this approach when they created a vaccine for the coronavirus that causes Middle East Respiratory Syndrome (MERS) years before COVID-19 first emerged.”

“Although the MERS vaccine never went to market, its development helped Moderna rapidly roll out its COVID-19 vaccine,” according to Reuters.

Moderna said none of the patent rights it is seeking to enforce are related to intellectual property it developed as a result of its collaboration with the National Institutes of Health (NIH) for the development of COVID-19 treatments.

Moderna received $2.5 billion in taxpayer funding to support the development of its COVID-19 vaccine, The New York Times reported.

Moderna, in October 2020, “pledged not to enforce its COVID-19 related [sic] patents while the pandemic continued,” according to the company’s statement.

However, the company said it “updated” its pledge on March 7, 2022, “when the collective fight against COVID-19 entered a new phase and vaccine supply was no longer a barrier to access in many parts of the world.”

As part of this “updated” pledge, Moderna “made clear that while it would never enforce its patents for any COVID-19 vaccine used in the 92 low- and middle-income countries in the GAVI COVAX Advance Market Commitment (AMC92),” the company “expected companies such as Pfizer and BioNTech to respect its intellectual property rights.”

Moderna said it “would consider a commercially reasonable license” if requested by other companies, but added, “Pfizer and BioNTech have failed to do so.”

Shannon Thyme Klinger, Moderna’s chief legal officer, said, “Pfizer and BioNTech unlawfully copied Moderna’s invention, and that they have continued to use them without permission.”

As of Friday morning, Pfizer had not responded to the allegations. A spokeswoman for the company, Jerica Pitts, said the company had not been served with a suit and was “unable to comment at this time.”

Malone: ‘Skirmish’ Between Moderna and Pfizer ‘Part of a Larger Effort to Assert Primacy in the MRNA Vaccine Domain by a Variety of Corporations’

In an interview with The Defender, Malone characterized Moderna’s lawsuit as “part of a larger ongoing dispute over the origins and patent coverage relevant to the mRNA vaccine technology” — while accusing Moderna and others of failure to cite other prior patents, including his own.

Malone said one of the patents under dispute in Moderna’s lawsuit involves the “delivery and formulation of engineered nucleic acids.”

The other patents at the heart of the dispute between Moderna and Pfizer-BioNTech, according to Malone, “involve broad claims concerning rights to express a full-length spike protein from any coronavirus using a modified mRNA approach.”

Malone said these patents are “also at risk for re-examination due to being overly broad.”

He described the “skirmish” between Moderna and Pfizer-BioNTech as being “part of a larger effort to assert primacy in the mRNA vaccine domain by a variety of corporations.”

At its root, the dispute is “really an extension of the concerted effort previously made by BioNTech and UPenn [the University of Pennsylvania] to claim Katalin Karikó and Drew Weissman as the original inventors of the [mRNA] technology,” instead of himself, Malone said.

He said this is transpiring “as part of a press campaign advocating that [Karikó and Weissman] receive the Nobel Prize for their work.”

Referring more broadly to Moderna’s lawsuit, Malone said it is “about Moderna attempting to extract money from Pfizer-BioNTech on claims that involve at least one issued patent which clearly failed to cite relevant prior art, both in published literature and in issued U.S. patents.”

“One outcome of this lawsuit,” said Malone, “may be that [one] patent is invalidated for failure to cite, and the other patents cited may be at risk for invalidation due to being overly broad.”

According to Reuters, legal disputes involving patents are “not uncommon in the early stages of new technology,” adding that all of the companies involved in the suit are already embroiled in other lawsuits.

For instance, Pfizer and BioNTech were sued for patent infringement by German company CureVac.

In turn, The Verge reported, Moderna was sued by two biotechnology companies, Arbutus Biopharma and Genevant Sciences, “over the method for packaging up the mRNA and delivering it to the body.”

Arbutus also succeeded in a previous patent infringement challenge against Moderna, in 2020.

And all three companies involved in the latest lawsuit — Pfizer, BioNTech and Moderna — were sued by another biotechnology company, Alnylam, over a similar technology.

Moderna is also involved in a separate legal dispute with the NIH involving rights to mRNA technology.

Bancel, in touting the importance of the mRNA technology for Moderna, went on to claim in the company’s statement that Moderna “is continuing to use the technology to develop treatments for influenza and HIV, as well as autoimmune and cardiovascular diseases and rare forms of cancer.”

News of the lawsuit came amidst a recent report, on Aug. 24, that the U.S. Food and Drug Administration is likely to approve updated versions of both the Pfizer-BioNTech and Moderna COVID-19 boosters.

Early reaction to the lawsuit on the part of investors was negative, with Pfizer shares falling 1.4% and BioNTech shares declining by about 2% in early morning trading before the opening bell of the New York Stock Exchange.

While the markets may be expressing some jitters in relation to Pfizer as a result of this lawsuit, for Malone, the main issue at hand comes back to the original development of mRNA technology — and who has, perhaps improperly, benefitted from it.

Speaking in reference to patents related to mRNA technology, Malone told The Defender:

“All of these patents are essentially ‘composition of matter’ derivatives of the original patents and publications derived from my own work at the Salk Institute and Vical during 1987-1990.

“Those patents have expired, I received no significant compensation for them, and the ideas, inventions, and scope of those patents now belong to the world. They do not belong to Moderna, BioNTech, CureVac or Pfizer, all of which have developed derivative positions based on that prior art.”

Michael Nevradakis, The Defender
Follow
Michael Nevradakis, Ph.D., is an independent journalist and researcher based in Athens, Greece. He completed his Ph.D. in media studies at the University of Texas in 2018 and holds a master's degree in public policy from Stony Brook University.
SHARE
Friends Read FreeCopyFacebookTweet
You May Also Like