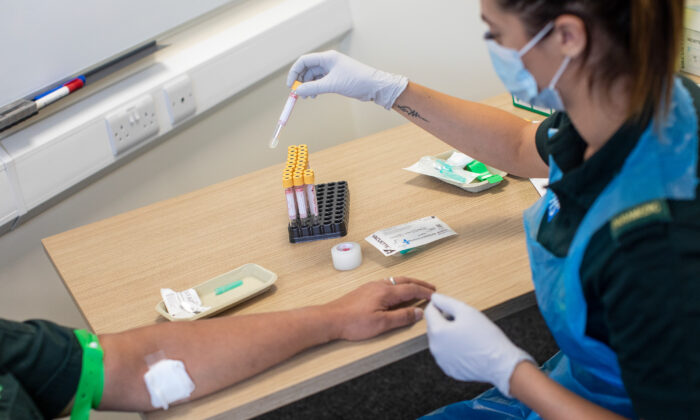 A paramedic, right, holds a test tube to be used for a blood sample during an antibody testing program operated by the West Midlands Ambulance Service NHS Foundation Trust, in Birmingham, England, on June 5, 2020. (Simon Dawson/Getty Images)
PUBLIC HEALTH INFORMATION

People who had mild COVID-19 have long-lasting antibody protection, according to a study by researchers from Washington University School of Medicine in St. Louis.

Scientists found that individuals who have recovered from a mild case of COVID-19 have long-lived plasma cells in their bone marrow that secretes low levels of antibodies against the CCP (Chinese Communist Party) virus for possibly a lifetime.

Plasma cells are a type of white blood cells developed from B cells and originate from the bone marrow. They are responsible for producing and secreting antibodies to a specific antigen.

“Last fall, there were reports that antibodies wane quickly after infection with the virus that causes COVID-19, and mainstream media interpreted that to mean that immunity was not long-lived,” said Ali Ellebedy, senior author of the study and an associate professor of pathology & immunology at Washington University.

“But that’s a misinterpretation of the data. It’s normal for antibody levels to go down after acute infection, but they don’t go down to zero; they plateau. Here, we found antibody-producing cells in people 11 months after first symptoms. These cells will live and produce antibodies for the rest of people’s lives. That’s strong evidence for long-lasting immunity,” he added.

The study (pdf), published in the medical journal Nature on May 24, involved 77 participants who provided serum samples at three-month intervals beginning approximately a month after symptom onset. Most of the participants, except for six, had mild cases of COVID-19, a disease caused by the CCP virus, also known as SARS-CoV-2.

The researchers found that the antibody levels declined rapidly during the first four months after infection and eventually leveled off, with antibodies still detected 11 months after the initial infection.

The findings question the need for people who have recovered from COVID-19 to still get vaccinated as the Centers for Disease Control and Prevention (CDC) told The Epoch Times in February 2021 that people should be vaccinated whether or not they’ve had the disease.

In an updated scientific brief (pdf) on May 10, the World Health Organization (WHO) stated that most people develop “strong protective immune responses following natural infection with SARS-CoV-2” and that remains “robust and protective against reinfection for at least 6-8 months after infection.” In addition, around 90 percent to 99 percent of people who recover from the disease develop detectable neutralizing antibodies.

The WHO’s update echoes the National Institutes of Health’s (NIH) earlier report from January of this year that stated: “the immune systems of more than 95 percent of people who recovered from COVID-19 had durable memories of the virus up to eight months after infection.”

The report was based on a study that examined antibodies and immune cells from about 200 people who had recovered from COVID-19 and found that various immune-system components consisting of antibodies, different types of T cells, and B cells provided the long-term immune protection.

“Several months ago, our studies showed that natural infection induced a strong response, and this study now shows that the responses last,” said Daniela Weiskopf, author of the study and research assistant professor at La Jolla Institutes for Immunology.

Scientists say that both antibodies and T cell responses are needed to achieve immunity to the CCP virus.

Multiple studies suggest that people who recovered from COVID-19 develop a group of immune cells, known as T cells, that play a significant role in maintaining lasting immunity against the virus, as these cells target and destroy virus-infected cells, while also stimulating the production of antibodies.

In September 2020, scientists found that most people who already had COVID-19 showed strong and broad CCP virus-specific T cell responses. While in a different study funded by the National Institute of Allergy and Infectious Diseases, researchers found that T cells were not affected by the mutations in the variants from the United Kingdom, South Africa, and Brazil as they “remained largely intact and could recognize virtually all mutations in the variants studied.”

Convalescent plasma is different from plasma-only donations as it uses blood from individuals who have recovered from COVID-19.

However, in the FDA’s February 2021 guidance, it states that convalescent plasma from individuals who received one of the investigational COVID-19 vaccines should not be collected, unless the following requirements are met: donors “1) had symptoms of COVID-19 and a positive test result from a diagnostic test approved, cleared, or authorized by FDA … 2) received the COVID-19 vaccine after diagnosis of COVID-19, AND 3) are within 6 months after complete resolution of COVID-19 symptoms.”

This is done to “ensure that COVID-19 convalescent plasma collected from donors contains antibodies directly related to their immune responses to SARS-CoV-2 infection” the federal regulator explained.