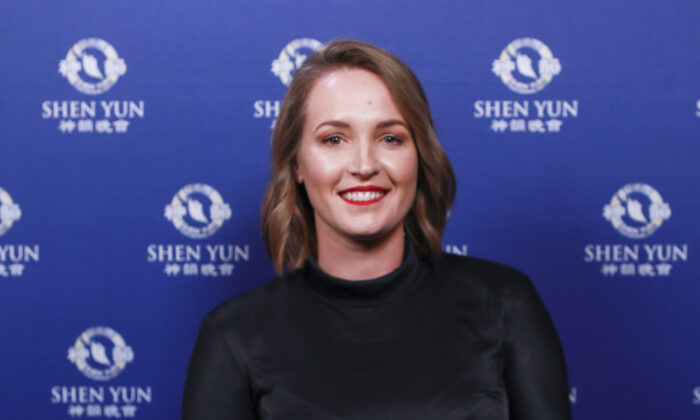 Kue Hall saw Shen Yun Performing Arts with 11 of her family members at the Capitol Theatre, in Sydney, on March 14, 2020. (NTD Television)

SYDNEY—Kue Hall attended Shen Yun Performing Arts for the first time with 11 of her family members and said that the story behind the performance was “super powerful.”

“I enjoyed [the performance] so much,” she said after seeing the show at the Capitol Theatre in Sydney on March 14, 2020. “Visually it was so incredible and to see the technique and abilities of the dancers was amazing, but the story behind it was super powerful as well—so it was amazing.”

Hall, who is currently a property writer for NewsCorp, said she flew one hour from Coffs Harbour to Sydney for a family reunion.

“I’m here with 11 of my family and we come from all over Australia, to see this,” Hall said. “This was the show that we’ve chosen to come and see. My Mum actually organized the whole event around the show … they all loved it.”

Based in New York, Shen Yun sets out every year on a mission to inspire and uplift theatergoers around the world, by bringing back to life the spirit of China’s culture—one that emphasizes harmony between heaven, earth, and humankind.

Hall was struck by the divinely-inspired aspects of the performance.

“That was absolutely amazing … It was really nice to see that it’s back to divine and love and being your best self, or staying true to your self—it was really lovely,” she said.

According to the company, classical Chinese dance lies at the heart of every Shen Yun performance. The dance form can vividly depict a wide range of emotions and portray any cherished timeless virtues—righteousness, loyalty, benevolence, and tolerance.

Hall was struck by the performers’ skills.

“I said to my sister, ‘I can’t believe the discipline that must go into this. Everything was so perfect, so in time, so amazing, so in step,'” she said. “I thought ‘Oh my gosh I really respect the discipline that goes into creating something like this,’ absolutely.”

She noted that her 6-year-old daughter and 9-year-old niece were amazed by the digitally animated backdrop.

“I thought that was insane, that was so great. [The children] were like ‘how did they do that?’ It [the animated backdrop] was seamless it was incredible it really added to the show—it was amazing,” Hall said. “The kids loved it.”

The company calls the animated backdrop an innovation that “creates seamless interaction between projection and performers on stage—an invention so original it has its own patent.”

“I think so much of from what I learnt from the performance, that so much of the values are things we need to go back to today—to love, to being the best of yourself, to connect into the Divine,” Hall shared after seeing Shen Yun. “I think it’s a really important message to be spreading … Really powerful and really important.”

With reporting by NTD Television and Mimi Nguyen Ly.