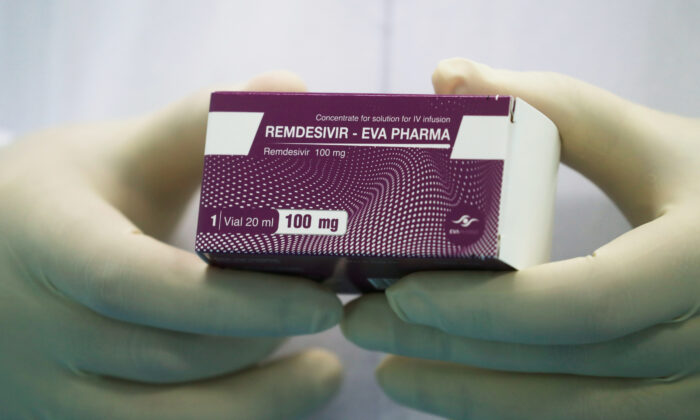 No Treatments Recommended for COVID-19 Patients Without Supplemental Oxygen: NIH

Physicians say they are concerned about the National Institutes of Health’s (NIH) updated guidance on therapeutics for COVID-19 patients.

The guidance, which was quietly updated on Oct. 9, recommends against any form of treatment for patients with mild to moderate COVID-19 symptoms who do not require supplemental oxygen.

“No specific antiviral or immunomodulatory therapy” is recommended for COVID-19 patients who are not hospitalized or are hospitalized without requiring supplemental oxygen the guidance states.

“With no cure in sight, the actions taken by NIH and other federal health officials to restrict access to early treatment is a death sentence for hundreds of thousands of Americans,” Dr. Simone Gold, M.D., J.D, and founder of AmericasFrontlineDoctors.com told The Epoch Times in an email.

The NIH’s recommendation to wait for treatment until severe illness develops goes against the Hippocratic Oath that doctors promise to “do no harm and injustice” and, according to the modern version, to “prevent disease whenever I can, for prevention is preferable to a cure.”

“Concerned physicians on the front lines of the pandemic are bound by their Hippocratic Oath to protect patients, but NIH’s radical step would criminalize medical ethics if it’s allowed to stand,” Gold says.

The NIH didn’t respond to a request for comment from The Epoch Times.

Dr. Scott Jensen, a family physician and a Republican state senator in Minnesota, said in a Facebook post that patients should be allowed to discuss and explore possible treatments with their physicians instead of waiting until their symptoms worsen.

“My patients are telling me that they would like to try something,” Jensen says. “They don’t want to be told that they either have to get better on their own or get bad enough to go into the hospital and then potentially be faced with a choice between a ventilator or hospice care or whatever.”

Jensen says that patients have asked him what they can take as a preventative measure or shortly after testing positive for COVID-19, the disease the CCP (Chinese Communist Party) virus causes.

“If in the first few days of COVID-19 diagnosis, we’re not getting better, I think it’s reasonable, I’ve told patients I think zinc, vitamin C, and vitamin D are good, if you will, preventive measures to take.”

The first and only U.S. Food and Drug Administration (FDA)-approved drug, remdesivir, is recommended for hospitalized patients requiring supplemental oxygen or ventilation, along with or without dexamethasone, according to the guidance.

Remdesivir, an antiviral drug by Gilead Sciences was approved by the FDA on Thursday. It was also granted emergency use authorization to treat children hospitalized with COVID-19 who are under the age of 12 and weigh at least 7.7 pounds.

President Donald Trump was prescribed remdesivir along with other drugs early after he tested positive for COVID-19.

Contrary to the NIH’s recommendation that remdesivir be given only for hospitalized patients requiring supplemental oxygen, researchers of a double-blind, randomized study on remdesivir said the benefit of the drug was “larger when given earlier in the illness.”

“Had this guidance been in place a month ago, President Trump would have been denied treatment at Walter Reed Medical Center,” said Gold.