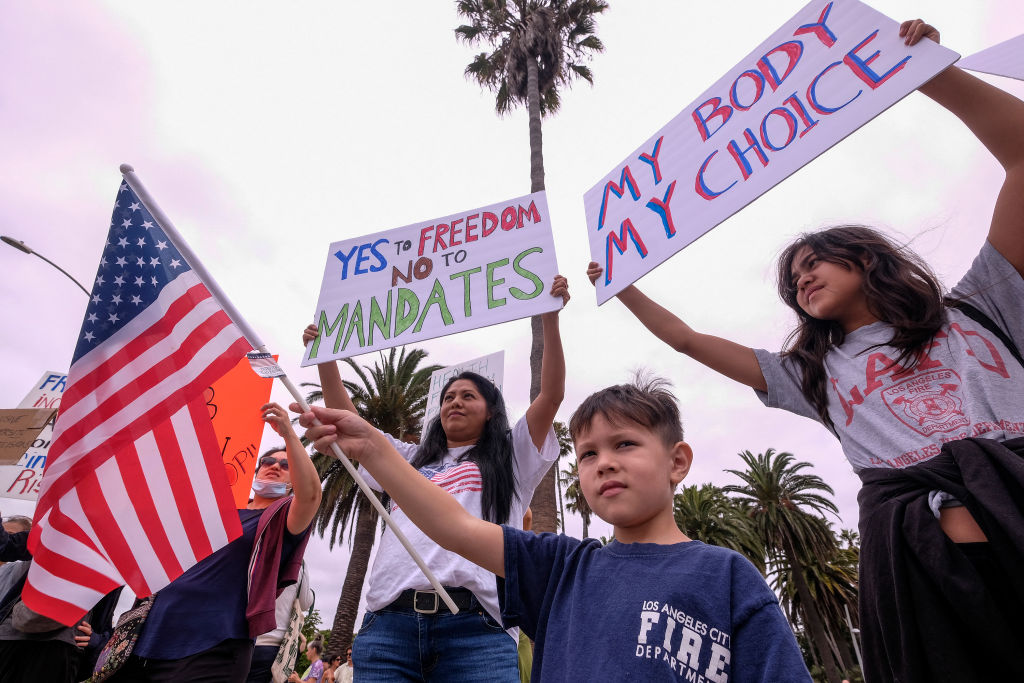 Protesters hold signs as they demonstrate during a "No Vaccine Passport Rally," in Santa Monica, Calif., on August 21, 2021. (Ringo Chiu/AFP via Getty Images)
Health Science

Decision to not get COVID-19 vaccine comes with consequences, but maybe not for the health care system
BY Jennifer Margulis TIMEJuly 11, 2022 PRINT

A large-scale international study of those unvaccinated against COVID-19 finds a pattern of discrimination—and a relatively low hospitalization rate.

While the study’s findings are limited by the nature of the selection process, in which unvaccinated people opted in to participate, the new study suggests that those who declined the vaccine may not be the burden to the health care system many have claimed them to be. The study is now available as a preprint (which means it hasn’t yet been peer-reviewed). It was uploaded to ResearchGate earlier this month.

The findings hold significant importance to policymakers. According to Our World in Data, 60 percent of the world is fully vaccinated against COVID-19. The 40 percent who aren’t vaccinated against the virus have been frequently blamed for the duration and severity of the COVID-19 pandemic, even as vaccination rates reached up to 90 percent in many jurisdictions.

With government agencies, news media, and social media algorithms ignoring or misrepresenting the contending science around COVID-19, the unvaccinated have faced often intense pressure to get vaccinated against COVID-19.

“What the survey aimed to do is gather insights about health outcomes, choices, and discrimination experienced by the marginalized subpopulation of people from diverse socio-economic backgrounds, ethnicities, and cultures who have elected to exercise their right of refusal of COVID-19 injections,” the study authors said.

In many places in the United States and Canada, those who declined the COVID-19 vaccines have been discriminated against, stigmatized, and marginalized from society. Nurses and health care workers were fired, Air Force cadets were denied commissions, and family members found themselves ostracized within some of their most intimate and important relationships.

The vilification of the unvaccinated has come with the censorship of both science and personal experience. Many doctors, nurses, scientists, and other health care professionals who speak out about the safety and necessity of these vaccines have been threatened with the loss of their medical licenses, deleted from social media, canceled from events with their peers, and fired from their jobs.

The study is based on data collected from the Control Group Cooperative (CGC), which was founded in July 2021 by a citizens group in the UK to represent and connect people who elected to not get the COVID-19 vaccines.

The goal of the CGC has been to analyze the long-term health outcomes and experiences of these individuals through self-reported surveys. According to their website, there are currently more than 300,000 unvaccinated participants from more than 175 countries participating in their long-term study.

The study was conducted by Robert Verkerk, founder of the Alliance for Natural Health International, an affiliate of the CGC. A team of international scientists contributed to the research. The study analyzes the data from the CGC survey from the first five months of its operation—from September 2021 through February.

The cohort analyzed by Verkerk consisted of 18,497 individuals out of the 297,618 people who had joined the CGC by the end of February.

Individuals participating in the study declined COVID-19 vaccination for various reasons. These included past vaccine injuries, preference for more natural remedies, lack of trust in pharmaceutical companies and government entities, and concerns about the validity of vaccine study results.

One-third of the individuals in the study self-reported that they received vaccinations as children. That figure may be low, as others may not have reported—or even remembered—their previous vaccinations.

While some had never been vaccinated, the cohort was mainly concerned about the safety, efficacy, and necessity of the COVID-19 vaccines, not all vaccines in general.

Discrimination Based on Vaccination

Between 20 and 50 percent of respondents, depending on where they lived, reported being personal targets of hate and discrimination. Many felt victimized for their vaccination status, especially those living in Europe, Australia, New Zealand, and South America.

They reported that they faced discrimination in the workplace, from friends or family members, and from their respective state authorities, because of their “unvaccinated” status.

The prejudice experienced within the workplace by respondents resulted in heavy economic burdens for many. For example, 29 percent of respondents from Australia and New Zealand reported losing their jobs during the five months that the survey was administered.

These survey results dovetail with what unvaccinated individuals have been facing globally. Those who don’t succumb to peer pressure, advertising, or incentivizing are then threatened with an ultimatum: Get the vaccine or get fired.

That’s what happened to Destiny Carpenter, a former nurse at Colorado Canyons Hospital. Carpenter is among one of the hundreds of U.S. nurses who have been fired for refusing to get the vaccine, as Fox News reported in September 2021.

Carpenter was nominated for the Daisy Award for extraordinary nursing three times during her tenure at the hospital. This award is granted to the most deserving nurse for exuding compassionate care to their patients.

In February, FiercePharma reported that more than 15,500 health care workers in the United States had been fired or suspended or had chosen to resign from their hospital jobs over their decision to remain unvaccinated.

In an analysis of the mental health issues experienced by the cohort, the scientists noted that the mental health burden “may be associated more to the human response to the pandemic, rather than psychological, fear-based reactions to any threat posed by the SARS-CoV-2 virus itself.”

In other words, the respondents’ mental health problems appeared to mainly be a result of being stigmatized and marginalized from society.

A Pandemic of the Unvaccinated?

While the study gives insight into the experience of the unvaccinated, it always raises questions about assertions that this group is an undue burden on the health care system.

While the study is potentially prone to bias because of the selection pool for the survey, an infection-hospitalization ratio of 0.4 percent would certainly challenge many assertions about the burden of the unvaccinated.

A study published in the Journal of Public Health Management and Practice in May 2021 found an overall infection-hospitalization ratio of 2.1 percent that varied more by age than by race or sex.

The study also found that hospitalization rates based on case counts overestimated the IHR by a factor of 10, “but this overestimation differed by demographic groups, especially age.”

Most of the CGC respondents who reported that they had caught COVID-19 had only mild symptoms and were sick for less than a week. Fatigue and coughing were the most common symptoms recorded.

Beyond the fact that they were unvaccinated, another unique trait of the CGC cohort may also be their propensity to try various therapeutics to treat their COVID-19 infections.

Participants reported that they didn’t need a vaccine to lessen their symptoms: Most infections were mild to begin with, and many respondents said they turned to natural remedies when they did get sick.

Participants reported that they opted to support their immune systems naturally by taking preventative vitamins such as zinc, vitamin C, vitamin D, and quercetin.

A study published in June 2021 in the journal Inflammopharmacology by an international team of researchers from India, Italy, and the United States, shows that using natural remedies is a scientifically sound choice.

This study explored the immune-boosting properties of vitamins and minerals in combating COVID-19 infections. The scientists found that if administered at higher-than-recommended daily doses, many vitamins had the potential to reduce viral load and risk of hospitalization from COVID-19.

The decision to combat COVID-19 with non-pharmacological immune-enhancing interventions may also help explain why the hospitalization rates of the unvaccinated in the study were so low.

A portion of the participants reported that they also took ivermectin, an anti-parasitical that has been both promoted and hotly criticized as a treatment for COVID-19, as The Epoch Times has reported.

While ivermectin remains controversial, a meta-analysis published in June 2021 in the American Journal of Therapeutics states: “Moderate-certainty evidence finds that large reductions in COVID-19 deaths are possible using ivermectin. Using ivermectin early in the clinical course may reduce numbers progressing to severe disease. The apparent safety and low cost suggest that ivermectin is likely to have a significant impact on the SARS-CoV-2 pandemic globally.”

On June 18, the Centers for Disease Control and Prevention (CDC) announced that it was authorizing the emergency use of Moderna and Pfizer vaccines for babies 6 months and older. About 20 million U.S. children are in this age bracket.

The announcement has raised concerns that side effects from the vaccine aren’t being weighed against potential benefits.

As of June 12, the U.S. Vaccine Adverse Event Reporting System (VAERS) indicated that there have been 1,301,354 adverse events and 28,859 deaths from COVID-19 vaccines. A recent analysis of VAERS reports done by two journalists in Israel revealed that there were 58 serious adverse effects in babies prior to the rollout of the vaccine authorization for those aged 6 months and older. The reports failed to indicate if these infants and toddlers were involved in the Pfizer clinical trial or why they received vaccination.

Verkerk is deeply concerned about the CDC vaccine authorization for children younger than 5. He holds master’s and doctorate degrees from Imperial College London and is co-author of more than 60 peer-reviewed journal articles in the areas of health, agriculture, and environment. He’s also the co-chair of the World Council of Health’s Health & Humanity Committee. He told The Epoch Times via email that many parents want this vaccine for their children because, like every parent, they want what’s best for their child.

“However, they’ve been misled as to the known science on both the benefits and the risks,” he wrote. “There could be disastrous long-term consequences for some children if they are exposed to the spike protein via the vaccine before they are exposed to circulating coronaviruses, including SARS-CoV-2, which would otherwise result in broader-based, more robust, naturally-acquired immunity.”

For Verkerk, it’s about choice. We shouldn’t vilify those who rely on natural immunity or refuse the vaccines for religious, medical, or ethical reasons, he said.

“We have seen a dramatic erosion of the principles of medical ethics,” he wrote.

We need to respect autonomy (the right of competent adults to make individualized and informed decisions about their own medical care) and adhere to the principle of first doing no harm, as well as to the principles of beneficence and justice, according to Verkerk.