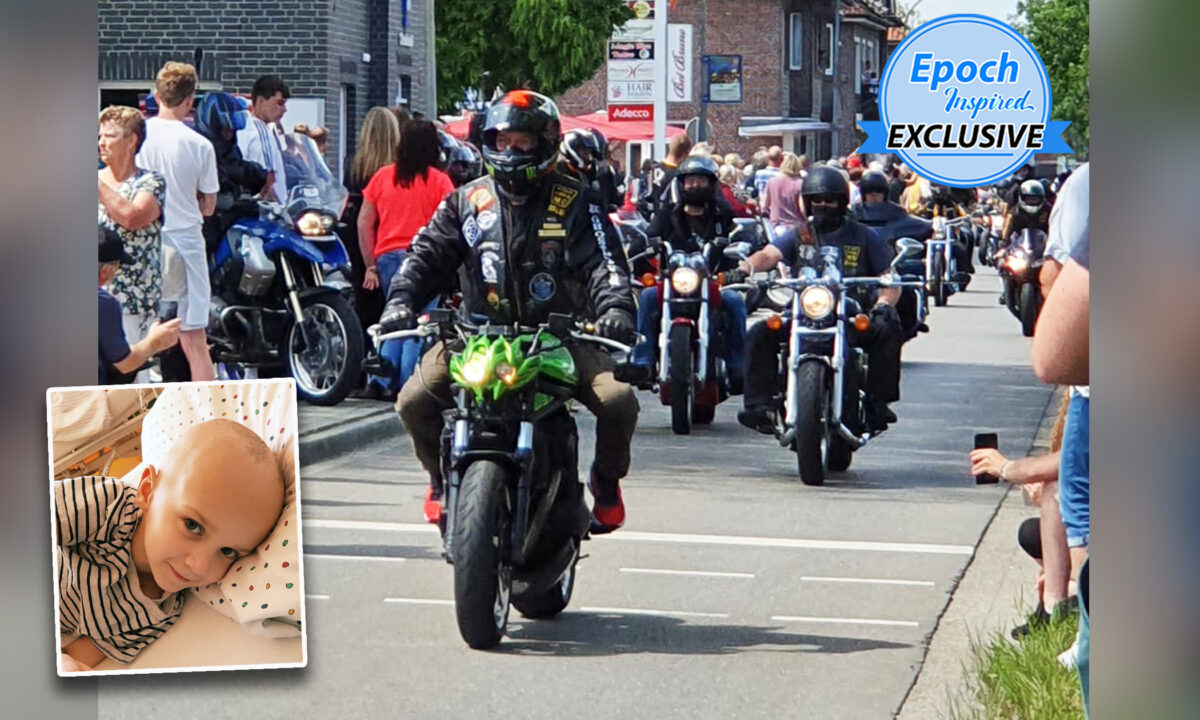 When a little boy with lymphoma made his last wish known to his family, they shared it, hoping to rouse a little support. The 6-year-old, an enthusiastic motocross rider, wanted to see bikers ride past his home and make some noise.

And to his surprise, approximately 15,000 bikers showed up.

From the German town of Rhauderfehn, Lower Saxony, Kilian Sass is the son of a biker belonging to a 24-member local bikers’ group. Fellow member Ralf Pietsch took it upon himself to make the little boy’s dying wish a reality.

The catalyst was a heartfelt voice message from Kilian himself, where he asked for bikers.

Pietsch then launched a campaign, called “Krach für Kilian”—meaning “Noise for Kilian”—garnering an enormous response on social media. “We hope that we can count on you … 5 minutes of your time for the last smile of a little fighter,” read the shoutout.

Chaperoned by Leer Police, bikers met at three meeting points around Rhauderfehn before parading past Kilian’s house to holler and beep their horns for the brave 6-year-old. The bike parade began at 9.30 a.m. and was completed at approximately 5 p.m.

“The parents were overwhelmed by the crowd and the sympathy of the arriving bikers,” Pietsch, a 57-year-old occupational therapist and rehab technician, told The Epoch Times. “Kilian himself watched the drive-by with a smile and one or two screams of joy … It was a great, long, and meaningful ride!”

Parade attendee Agnes Wienberg told The Epoch Times that she doesn’t know the family personally but read the appeal on Facebook.

“I was impressed by the number of people who answered this call; tears came very often and I kept saying, ‘Just awesome, you’re just mega,'” she shared, adding, “I thought it was mega that the motorcyclists stick together like that.”

Wienberg, a mother and grandmother herself, believes that the parade gave Kilian and his family a lot of strength.

Kilian was diagnosed with lymphoma, a cancer of the lymphatic system, in January. Despite emergency surgery and chemotherapy, he and his family received heartbreaking news on July 15: Kilian’s cancer cannot be cured.

Despite having two other children, Kilian’s parents—Lars and Jasmin—have devoted themselves to his bedside. The Noise for Kilian campaign page credited extended family and the Parents’ Association for Children with Cancer in East Frisia for making this possible.

Pietsch has organized other campaigns in the past but says that nothing has matched the “framework and emotional scope” of Kilian’s campaign. He thanked all participants and the support of the authorities that made the huge-scale parade possible.

Sadly, Pietsch reported that Kilian’s health is in decline since the event. Yet Rhauderfehn bikers are carrying the little boy’s passion with them in their hearts as they ride.

“We have once again more than clearly demonstrated that bikers are not ‘bad, loud rockers’ but have the biggest hearts on Earth,” Pietsch told The Epoch Times. “This cross-city cohesion exists only among bikers … Getting something like that up and running in such a short time is, of course, only possible in a team. I didn’t do it alone.”