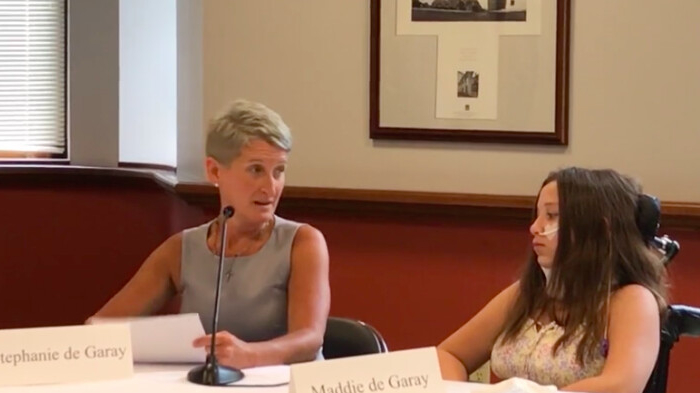 Screenshot of Stephanie de Garay and her daughter Maddie de Garay sharing how Maddie was injured from a COVID-19 vaccine at Sen. Ron Johnson's press event on June 28, 2021. (Rumble/Screenshot via The Epoch Times)
Vaccines & Safety

Maddie de Garay was a healthy, happy, straight-A student from Ohio who enjoyed hanging out with friends before she received her second dose of the Pfizer COVID-19 vaccine at the age of 12.

The now 13-year-old was one of the 2,260 voluntary participants in the Pfizer COVID-19 vaccine trial for adolescents aged 12 to 15 that began in July 2020. Maddie’s mother, Stephanie de Garay, said her daughter asked to participate in the trial as a way to help end the pandemic.

“My husband works in the medical field, and I have a degree in electrical engineering,” said de Garay, who spoke on behalf of her daughter at a press conference hosted by Sen. Ron Johnson (R-Wisc.) on June 28. “We are pro-vaccine and pro-science, which is why we agreed to let Maddie and her two older brothers volunteer for the trial.”

Johnson held a news conference to allow people from across the country who’ve experienced severe adverse reactions following a COVID-19 vaccine to share their stories after being “repeatedly ignored” by medical professionals and federal health authorities, advocating for Americans’ health care freedom.

According to de Garay’s testimony, which has been posted on an independent website by a group of “pro-vaccine, pro-science” Americans dedicated to raising awareness about rare cases believed to be COVID-19 vaccine injuries, Maddie received her first injection on Dec. 30, 2020, and experienced mild adverse reactions of fever, tiredness, and swelling at the injection site that resolved within a couple of days. However, after getting her second dose on Jan. 20, Maddie immediately felt pain at the injection site that didn’t occur with the first dose.

About 18 hours later, she developed “severe muscle/nerve pain, painful electrical shocks down her neck and spine which caused her to walk hunched over, severe chest pain that felt like her heart was being pulled out, numbness and swelling in her vaccine arm (left), her fingers and toes turned white and were ice cold to the touch, the pain in her toes was so bad she walked on her heels, severe abdominal pain (especially on [the] lower right side), and a fever of 101.4,” de Garay wrote.

Maddie was taken to the emergency room at the children’s hospital where the Pfizer vaccine trial was conducted.

“Her blood was taken for a renal profile and tested, she was checked for appendicitis, which she did not have, and given an IV with some medicine and sent home,” de Garay said. “In the discharge papers from the children’s hospital ER that she went to, the diagnosis stated adverse effect of vaccine initial encounter. This would be the only time that that was written in her medical charts.”

Maddie’s condition didn’t improve but worsened over the next 2 1/2 months as she developed more symptoms, including not being able to walk; inability to feel below her waist; memory loss; loss of bladder control; inability to swallow food or liquids, thus requiring a nasogastric feeding tube; and fainting or seizing 10 or more times per day.

“All these symptoms are still here today. Some days are worse than others,” de Garay tearfully said.

For the past five months, de Garay said her daughter was taken to the emergency room nine times and “hospitalized three times for a total of two months in the hospital.” Maddie has also visited various specialists and received multiple therapies.

De Garay believes the vaccine caused her daughter’s injury and feels her concerns haven’t been taken seriously by medical professionals, Pfizer, or federal health agencies. She said doctors have dismissed her daughter’s condition as a mental issue.

“Because they couldn’t figure it out, one physician labeled her as having functional neurological disorder due to anxiety,” said de Garay. “At one point, they even tried to admit her to a mental hospital.”

Prior to her vaccine, Maddie had no major health issues and only took medication for her attention deficit hyperactivity disorder.

De Garay also claims in her written testimony that once Maddie was given a diagnosis, further testing was stopped, and “any new doctors already had a bias from reading her medical record.”

It wasn’t until after de Garay connected her neurologist to another doctor conducting research on adverse reactions similar to Maddie’s that additional blood tests and an MRI were prescribed in June.

De Garay doesn’t understand why doctors and federal health agencies aren’t studying Maddie’s case and working to find out why some people are experiencing severe adverse reactions after receiving COVID-19 vaccines, so others won’t have to go through the same thing.

“All we want is for Maddie to be seen, heard, and believed, because she has not been. And we want her to get the care that she desperately needs so she can go back to normal again,” de Garay said.

In a statement to The Epoch Times, Pfizer said Maddie’s condition wasn’t related to the Pfizer vaccine.

“Pfizer and the vaccine clinical trial investigator each independently evaluated this case and concluded that it is not related to the Pfizer-BioNTech COVID-19 vaccine. The information about the case has been shared with health authorities.”

Pfizer developed its vaccine in partnership with BioNTech, a biotechnology company in Germany.

Pfizer’s vaccine is currently the only COVID-19 vaccine granted emergency use authorization (EUA) for individuals 12 years of age and older in the United States. But that may change as Moderna announced on June 10 that it has filed for an EUA for use of its vaccine in adolescents.

De Garay was one of five people to speak at the press conference about severe health conditions experienced following a COVID-19 vaccination.

Johnson also presented data from the Vaccine Adverse Event Reporting System (VAERS). As of June 18, VAERS received 384,270 reports of adverse events and 4,812 reports of fatalities among Americans who had gotten a COVID-19 vaccine.

Reports made on VAERS don’t necessarily mean the vaccine caused the adverse effects or deaths. In addition, VAERS is known to only capture less than 1 percent of adverse events from vaccines, due to underreporting.