Merck Seeks Authorization From US Regulators for Antiviral COVID-19 Treatment 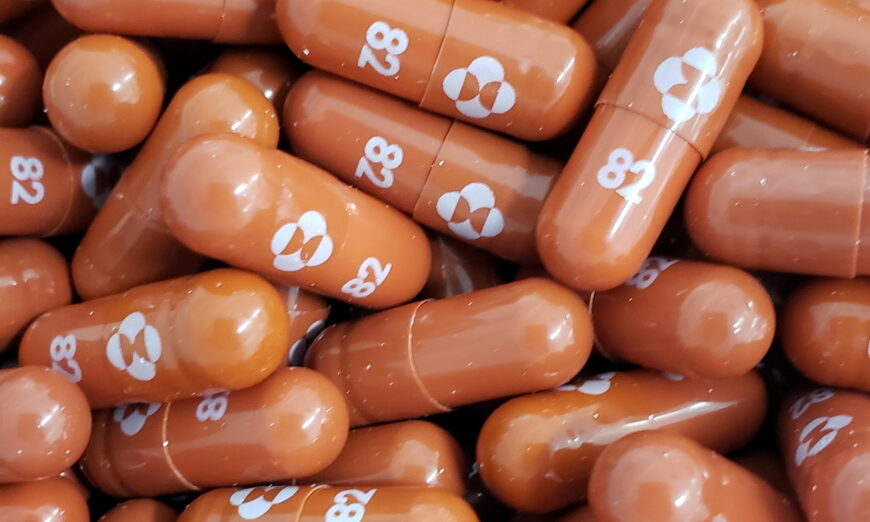 An experimental COVID-19 treatment pill called molnupiravir being developed by Merck and Ridgeback Biotherapeutics, in an undated photograph. (Merck/Reuters)

Merck and its partner on Oct. 11 announced that they filed an emergency use authorization application with the U.S. Food and Drug Administration (FDA) for their oral antiviral medicine for the treatment of COVID-19.

The pill is meant to combat cases of mild or moderate COVID-19.

Merck said last week that an interim analysis of its phase 3 trial studying the drug showed it was effective in cutting the risk of hospitalization, a key measure in COVID-19 treatments.

The antiviral, molnupiravir, cut the risk of hospitalization or death in half for adults who were deemed at risk but not hospitalized, according to a summary Merck released.

The results were touted by the companies and a number of experts, including former FDA Commissioner Scott Gottlieb.

“This is a phenomenal result. I mean, this is a profound game-changer, to have an oral pill that had this kind of effect, this magnitude of effect in patients who are at high risk who are already symptomatic,” Gottlieb said on CNBC’s “Squawk Box.”

But full results haven’t yet been published, and other experts have said they’re worried about how the pill attacks the virus.

Molnupiravir embeds itself in the virus’s genetic material and causes a high number of mutations, ultimately overwhelming it to extinction, a process known as lethal mutagenesis.

Researchers have said that the method carries risk potential because “the same mutagenic activity that impacts viral replication has the potential for incorporation and mutagenesis of host DNA,” which could contribute to the development of cancer or cause birth defects in an unborn baby. That’s what happened during testing of NHC, the compound molnupiravir creates.

“There is a concern that this will cause long-term mutation effects, even cancer,” Dr. Shuntai Zhou, a scientist at the Swanstrom Lab at the University of North Carolina, told Barron’s.

Dr. Michael Carome, director of Public Citizen’s Health Research Group, told The Epoch Times that the concern is theoretical for now and that it’s likely that signaling of rare adverse events would only be possible with long-term trials because premarket trials typically only involve several thousand participants.

“The FDA is never going to require studies that involve clinical trials that involve tens of thousands or hundreds of thousands of people to increase that signal detection. That’s just the nature of the regulatory review system,” he said. “For rare types of serious events, they’re not going to be detected except in the post-marketing surveillance phase, the post-approval phase, and lots more people are exposed to the drug for longer periods of time than the drug was used in the clinical trials.”

As an example, regulators approved a class of antibiotics called fluoroquinolones but added warnings on their safety labels years later, after instances of hypoglycemic coma were detected following their use.

“The extraordinary impact of this pandemic demands that we move with unprecedented urgency, and that is what our teams have done by submitting this application for molnupiravir to the FDA within 10 days of receiving the data,” Dr. Robert Davis, Merck’s CEO and president, said in a statement.

“The submission to the FDA is a critical step towards making molnupiravir available to people who may benefit from an oral antiviral medicine that can be taken at home shortly after diagnosis with COVID-19,” said Wendy Holman, chief executive officer of Ridgeback Biotherapeutics, Merck’s partner.