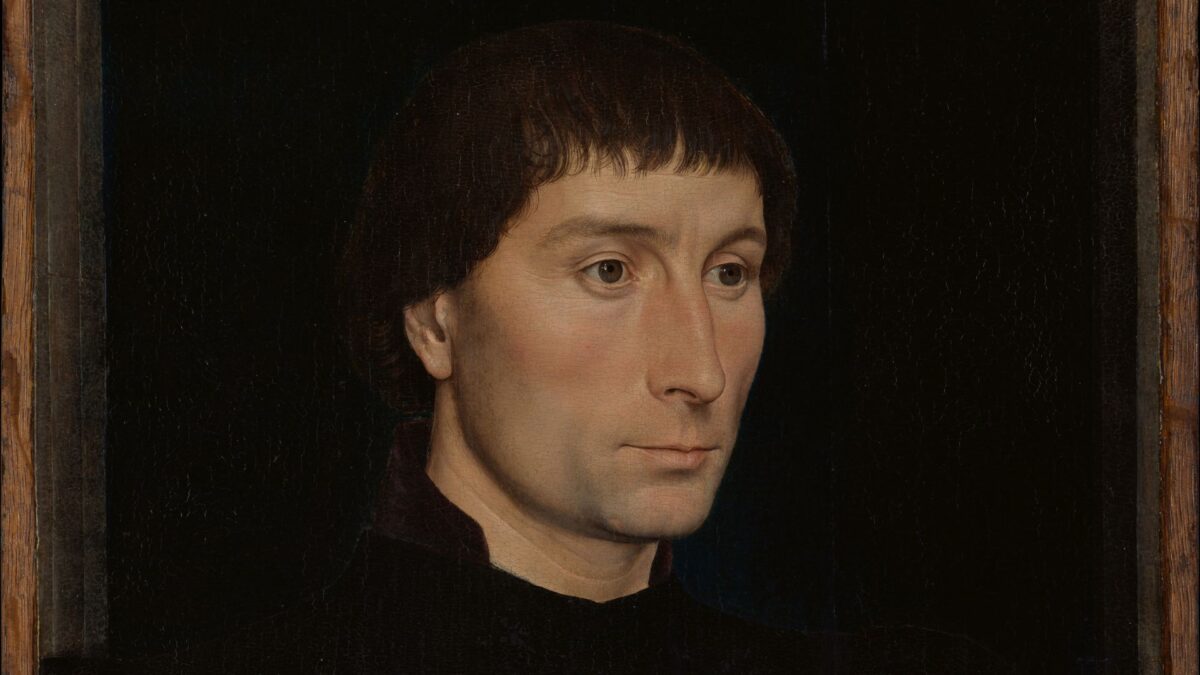 Appreciating Hans Memling and Portrait Painting
BY Lorraine Ferrier TIMEJune 30, 2022 PRINT
Years ago, I was one of those people you’d see rushing past the rows of old master portraits in a museum or art gallery on my way to see a more exciting genre such as history painting.  I admired the portrait artists’ skills yet, frankly, I found little joy in viewing important people long-dead and often long-forgotten.

Hans Memling’s “Portrait of Tommaso di Folco Portinari,” at The Metropolitan Museum of Art, highlights well why I now love old master portraits, and why we should all make friends with them.

Full of grace, of course, Portinari holds a gentle gaze in his portrait, pursing his lips a little to concentrate as he holds his hands together in prayer. His dark clothing blends into the background, creating a striking—almost modern—image that brings our attention to Portinari’s piety.

But the Portinari we see is not as Memling intended. As oil paint ages, it becomes transparent, so darker colors tend to become darker. Memling painted Portinari’s clothes in a burgundy-like color, but over the centuries, the paint has turned almost plum-black. Time has taken the details of Portinari’s rich, velvet costume, too.

Odd though it may seem, I’m drawn to this portrait because it has been stripped of those period details. It makes sense that we’re naturally drawn to things we easily recognize. When I see Portinari’s portrait today, I’m face-to-face with a man whom I know nothing about. There’s no indication of his wealth or status, yet Memling’s expert observational skills and brushwork show Portinari’s heartfelt faith. That transcends time.

In the 15th century, wealthy Europeans flocked to Bruges, in Flanders, when the Duke of Burgundy (Philip the Good) set up one of his courts there. An Italian, Tommaso Portinari, managed the Medici bank in the city.

Portinari’s portrait is part of a devotional triptych (a three-panel painting) that he is believed to have commissioned for his wedding. The central triptych panel would have been of the Virgin and Child. Experts believe that the central panel for the Portinari triptych is now lost; it is presumed to have a dark background, which was traditionally used in Burgundian court portraiture, as seen in the couple’s portraits. The Met made a hypothetical mockup of how the triptych might have looked using Memling’s “Virgin and Child” painting held at The National Gallery, London. The right panel is of Portinari’s wife, Maria, in prayer, which can also be seen along with her husband’s portrait at The Met.

In her portrait, Maria wears a gold ring set with two gems (maybe a ruby and an emerald) on her ring finger signifying her marriage to Tommaso. He wears a similar gold ring set with one stone, perhaps an emerald, on his little finger. Ring-wearing became popular in the Middle Ages. Royals and nobles wore rings made of gold and silver set with precious stones that showed the wearers’ wealth and love for beauty. People in the Middle Ages wore the stones as talismans. For instance, they thought rubies could improve health, combat lust, and promote harmony and righteous thoughts; emeralds could increase wealth, and cure epilepsy and eye problems.

Maria wears a stunning necklace and a burgundy velvet dress edged with fur. Memling superbly mimicked the different textures, such as her transparent chiffon-like veil. He also painted Maria’s every facial detail, from her faint under-eye circles and wrinkles to her eyelashes and eyebrow hairs.

Memling’s Portinari triptych was made for devotion, but a different example of his portrait work can be found in a diptych (two-panel painting): The Met’s “Portrait of an Old Man,” and “Portrait of an Old Woman” at The Museum of Fine Arts, Houston. Both of these graceful portraits, that were once side-by-side in a diptych (two-panel painting), were painted to show a couple at the end of their lives. The old couple’s fine lines and wrinkles may be deeper than those of their younger counterparts, but Memling echoed the same dignity in them all. In the diptych, he captured the old woman’s meekness and the old man’s warm expression full of wisdom that only age can bring.

Memling’s ability to create realistic yet solemn, moving portraits made him the most sought-after portrait painter in Bruges after the leading Bruges painter, Petrus Christus, died. Memling mainly created religious paintings (from private devotional pieces to large religious panels) and then portraits, especially of Italians living in Bruges.

Memling was born in Germany, and not too much is known about his training, although it’s thought that he learned from Rogier van der Weyden. Memling was the first artist to introduce landscape scenes into his portraits. The Met’s “Portrait of a Young Man” is a great example of this.

In Bruges, with patrons such as the Portinari family, Memling became wealthy. His art influenced artists in Italy, particularly in Venice where it’s thought that his art inspired Venetian artist Giovanni Bellini.

Memling saw people. Meeting his portrait of Tommaso reminds me to see the people in these portraits rather than the period itself. Perhaps Tommaso can introduce others to the joy of old master portraits, too.