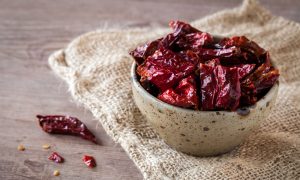 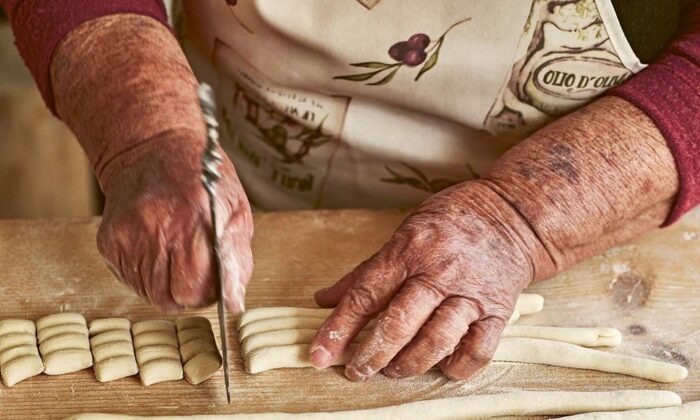 Meet the Pasta Grannies, the Italian Nonnas Saving Handmade Pasta One YouTube Video at a Time

These nonnas are the stars of a hit YouTube channel, dedicated to preserving the art of making pasta from scratch
By Crystal Shi

Cesaria is 95 years old, but her fingers are swift and strong as they twist skinny strands of dough into lorighittas, a delicate Sardinian pasta shaped like braided hoop earrings.

The process starts with semolina and salted water. Cesaria measures them only by eye and years of practice, coaxes them into a smooth, pliable dough with a good 30 minutes of vigorous kneading, then tapers one end of the dough into a long, fine rope. With one hand, she wraps the end of the rope twice around three fingers of her other hand, forming a double hoop, and in a flash, pinches the hoop off the rope, slips it from her fingers, and rolls the overlapping strands against each other so that they twist together. The finished hoops are laid out on a large, flat basket to dry.

Morgongiori, the tiny Sardinian village where Cesaria has lived and hand-made pasta all her life, is the only place in Italy where lorighittas are made. But thanks to Pasta Grannies, a YouTube channel created by Vicky Bennison, people the world over can watch this living art in action.

Bennison started the channel five years ago, as a way to document Italy’s handmade pasta-making traditions, before they disappear to time. To do so, she turned to the country’s best home cooks: its grandmothers.

Since then, she’s traveled from Piedmont to Puglia to film more than 250 grannies—and a few grandpas—making pasta by hand in their homes the way they have for decades, and still do for their families today. They’re mostly over the age of 65, part of a generation that grew their own food and made pasta from scratch out of necessity, for frugality and for survival. So far, about 10 of them have been over 90. (“When I hear things like ‘she’s 95,’ I go, ‘Oh my goodness, don’t die! I’ve got to get to you!’” Bennison said.)

The appeal is easy to see—just try and watch a video of one of these smiling nonnas without smiling yourself.

Cesaria is the channel’s most popular nonna; her lorighittas video, uploaded in December 2017, boasts over 596,000 views to date. (Told of her “global superstar” status, Cesaria found it all “hilarious,” Bennison said.) Now, Pasta Grannies has amassed a following of more than 433,000 subscribers, and has its own, brand new eponymous cookbook, released in the United States this October. The book features more than 70 nonnas, putting their stories and time-perfected recipes to paper likely for the first time.

According to YouTube analytics, the channel is most popular with 25- to 35-year-olds, Bennison said. Though she suspects that it partly has to do with YouTube demographics in general, she still takes that as a sign of hope for the survival of these traditions: “I think that younger people have seen that their grandmothers have something important to contribute,” she said.

Bennison, a 60-year-old British food writer with a background in international development, divides her time between London and Italy, where she bought a house in Le Marche 15 years ago. It was there that she met her first nonna.

She was invited to the home of a family of local wild cherry wine producers for a meal, a feast of tender ricotta ravioli and braised rabbit. Nonna Maria, the humble home cook behind the spread, preferred to stay in the shadows, only making a brief appearance at the table after much insistence.

Curiosity piqued, Bennison later asked the manager of her local supermarket, Alessandro, about the town’s local pasta dishes. He immediately volunteered his own nonna, another Maria, to demonstrate her skills—after all, Bennison writes, “all Italians know their grandmothers are the best cooks.” Soon after, Maria, Alessandro, and his wife Elisabetta piled into Bennison’s home for a pasta-making lesson.

Bennison couldn’t help but notice, though, that this moment of intergenerational connection was backdropped by a larger disconnect: More and more, these skills were not being passed down to younger generations of Italians. Their busy modern lifestyles left little time for making pasta by hand, and such precious traditional techniques, relics of an older way of life, were in danger of disappearing. Bennison set out to save them.

But writing about them alone wouldn’t be enough to do them justice, she realized—pasta-making was too visual of a craft. Neither would photography, which she felt couldn’t fully capture the details of the process, or the sheer effort and physicality involved, or “the joy of the women and the fun that they’re having.”

“It was clear,” Bennison concluded, “that I needed to learn how to use a video camera.”

Bennison started out posting videos about once a month, more as a hobby. She’s since amped up the frequency to once a week, and recruited a videographer to help her.

She also has a “granny finder,” Livia De Giovanni, who acts as an indispensable liaison with local communities. For each region of Italy they travel to, De Giovanni will contact mayors, food festival organizers, and other locals to scout out potential grannies. “We’re very dependent on the kindness of strangers,” Bennison said.

They limit each trip to three to four days of filming—because “after three days, you’re kind of pasta drunk.”

The style of the videos has remained the same over the years: simple, real, and grounded, much like their charming subjects. They’re filmed in dimly lit home kitchens or sun-splotched patios, sometimes with friends and family helping in the background, with handheld shots that follow floured hands as they deftly knead, roll, and stir.

Post-production is also basic: Bennison adds a simple voiceover to narrate the process, subtitles translate the spoken Italian, and a generic, cheery soundtrack completes the package.

“It’s not the height of sophistication. I wasn’t aiming for that,” Bennison said. “I was aiming for a kind of real-time, more reportage type of video, and have kept with that style.”

Her videographer could do much more than he does, she admitted, but she doesn’t let him—no drones allowed, she once had to tell him.

Part of that is for the nonnas’ sake, too: “We don’t want to freak them out,” Bennison said. “Ninety-nine percent of the time, these women have never been filmed before in their lives, so they have no idea what to expect.”

“The most important thing for me is that the grandmothers should enjoy themselves,” she said. “We want to them to have kind of a conversational time, like [they’re] cooking for their family.”

On video and on paper, these grandmothers’ recipes tell a visual story of Italy’s culinary heritage. Like Cesaria’s Sardinian lorighittas, their pastas and sauces are often regional specialties, prepared with local, homegrown ingredients.

There are familiar classics, like tagliatelle and tortellini, but also more obscure varieties, some with delightfully whimsical names and histories: tiny maccarones de ungia (“fingernail pasta”), wispy filindeu (“threads of God”), cinnamon-scented Lumachelle della Duchessa (“Duchess’ Little Snails,” traditionally made for noblewomen in the 15th century, to replenish their bodies after childbirth).

In the mountainous Valtellina of northern Italy, Laura makes ribbons of pizzoccheri from buckwheat flour, traditionally cultivated on the region’s high slopes, to serve with local Alpine cheese and plenty of garlicky butter. In Basilicata in southern Italy, Maria tosses oblong shells of raschiatelli, the region’s version of cavatelli, with homemade olive oil and garden-grown peperone di Senise, a famed local red pepper. And in the wooded Garfagnana region of Tuscany, Marica layers hand-torn rags of strapponi with foraged porcini and wild mint.

Beyond the recipes, though, Pasta Grannies is also a celebration of these remarkable women themselves. “All my grannies, I can remember them by name,” Bennison said.

They all have incredible stories—of war and poverty, romance and friendship, hardship and resilience. Some are revealed in bits and pieces in the videos, between rolling out dough and salting water; many are told in more detail in the book.

Their personalities, as expected, vary widely. Some are quite shy—Bennison recalls one nonna who barely spoke a word the whole time they were filming—while others can be lively and charismatic, having “discovered that they actually quite like being on camera.”

Letizia, the oldest Pasta Granny yet at 100 years old, was a natural.

“As you can see, I am not that young,” she says in her video for making tagliarini. (Actually, it’s quite difficult to see—she glows with beauty and confidence, and there’s a mischievous spark in her eyes.) “But I still like to make homemade pasta, the same pasta that my parents and my grandparents used to make, the same pasta I made for my children to stop them [from] going hungry during the war.”

Letizia was a schoolteacher all her life, and it shows. She commands attention, speaking with a clear, self-assured authority as she instructs on the proper way to roll out the dough or trim wild fennel. (Though in the next moment, she breaks into a giggle as she sniffs the wispy fronds.) She still writes poetry and paints, and when Bennison included her recipe in the book, she wrote her an essay about pasta to make sure she didn’t miss anything.

“I asked her what the secret is to healthy longevity,” Bennison writes, “and she says one has to stay busy—and to find your inner strength when terrible things happen.”

She’s found this attitude typical across her grannies: “[They’re] hugely social, with their family, with their community, with their church. They’re on the go all day, every day, and have not stopped whenever they’re supposed to retire. They’ve kept going—and there’s sort of a lesson for us all, I think, in that.”

And there are plenty more lessons to be learned from these nonnas, both in and out of the kitchen: the beauty in simplicity, the strength in tradition, the power of infusing everyday food with love. Luckily, a great store of this age-old wisdom lies just a click away.

See the Pasta Grannies in action at YouTube.com/user/PastaGrannies

See also: How to Make Egg Pasta Dough Like an Italian Nonna