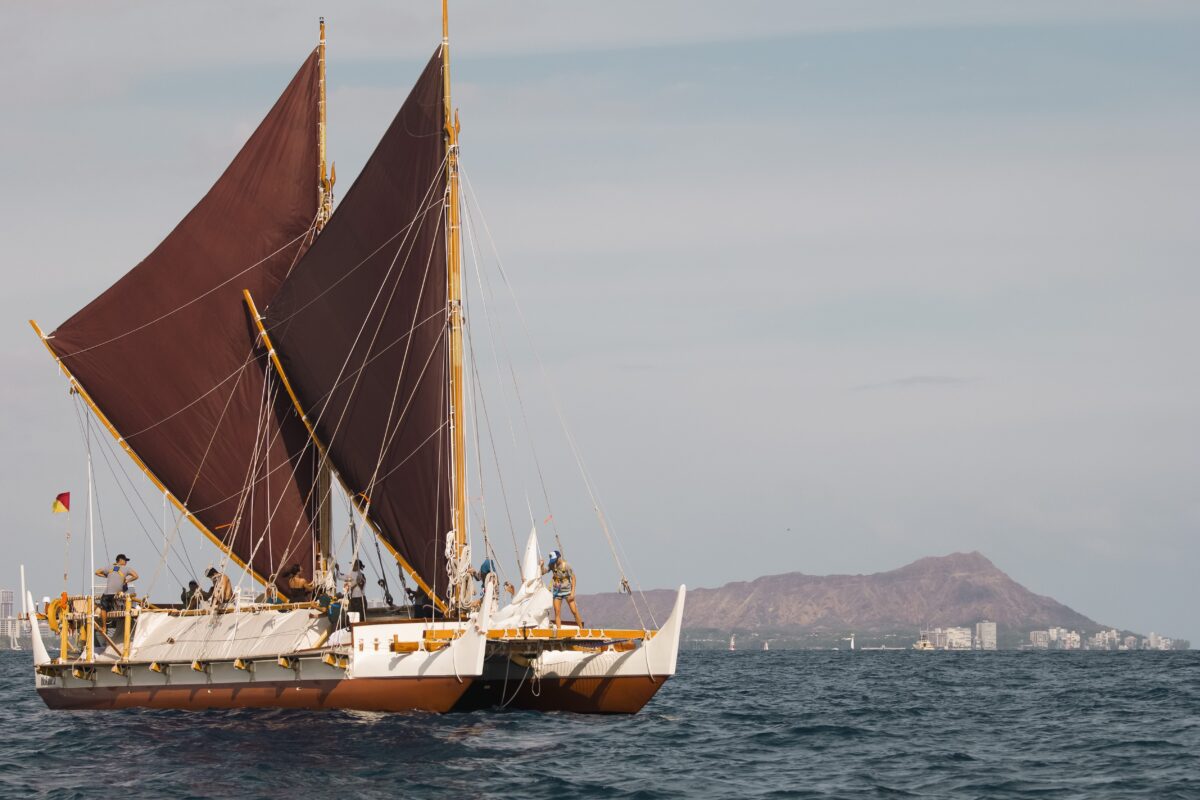 The twin-hull catamaran design of the Hokule‘a stabilizes it for journeys on the world’s biggest ocean. (Courtesy of Polynesian Voyaging Society)
American Essence

A student of the ancient Polynesian art of wayfinding, Nainoa Thompson demonstrates that trans-Pacific navigation with just the sky and sea as guides is possible—and can bring people together
BY Eric Lucas TIMEAugust 10, 2022 PRINT

Nainoa Thompson did not set out to rewrite history. He just wanted to go for an adventure.

But he accomplished both. Decades later, he’s now the most famous person in Hawaii and an icon to seafaring people around the world. Along the way, he learned a few things: Intense preparation surmounts risk. The riskiest action can be none at all. And sometimes, knowledge by itself, no matter how deep, is not sufficient.

But all that came later as he learned what’s known as “The Way of the Canoe.” First, he headed to sea on a Polynesian voyaging canoe adventure.

“All I knew was where I wanted to be—on the ocean,” Thompson said of his young self growing up just outside Waikiki on a dairy farm. His earliest memory is of himself as a 5-year-old milking cows. Then one day, a fishing expedition introduced him to the Pacific, just a mile away. His affinity for the ocean was immediate, and it determined the course of his life. “I didn’t know how I was going to get out on the ocean for good, but I knew it was going to be somehow.”

As it turned out, Thompson’s first real ocean adventure, at the age of 22 in 1976, was not only an amazing odyssey; it caused a complete upheaval of Western attitudes about the Polynesian settlement of the Pacific. Sailing from Hawaii to Tahiti on a traditional oceangoing canoe, using only the sun, stars, wind, waves, and currents for navigation—an ancient art known as wayfinding—he and his mates demonstrated that Polynesians had skillfully and deliberately long ago crossed Earth’s biggest ocean to find new homelands. Their journeys concluded in Thompson’s native Hawaiian islands about 1,500 years ago.

Though oral histories and some rather obvious logical thinking indicated that Polynesian legends were in fact, well, fact, Western anthropologists long dismissed the idea. No compasses, no sextants, no printed maps? Impossible. Some derided it as primitive fantasy, arguing that only dumb luck and storm winds brought indigenous settlers to almost every island in the world’s biggest ocean. In the 1950s, New Zealand anthropology professor Andrew Sharp dismissed the idea of deliberate voyages as nonsense.

Then, in the early 1970s, a group led by native Hawaiian artist Herb Kane and radical young anthropologist Ben Finney decided to prove academic gospel wrong. A years-long search led them to the last great wayfinder on earth, Mau Piailug, on the small island of Satawal in Micronesia. They built a 61-foot Polynesian double-hulled voyaging canoe named Hokule‘a: “Star of Gladness.” They asked Piailug to teach them wayfinding, and to guide them 2,750 miles to Tahiti.

That was 1976; Thompson was onboard as an apprentice navigator, and violent conflicts among the crew kept them from taking Hokule‘a back to Hawaii using wayfinding. Piailug returned to Micronesia, the canoe came home under modern navigation, and it looked like the end of the adventure.

Setting off on One’s Own

Thompson wasn’t ready to quit. Four years later, having studied Piailug’s techniques intently, he guided Hokule‘a to Tahiti and back as chief navigator—again using only the stars, winds, currents, and waves as guideposts, with Piailug as adviser but not leader. That was the first such voyage in 600 years, but it was no lark.

First, Thompson had to convince Piailug to teach him wayfinding. Then came years of studying star maps and charts of ocean waves, currents, and prevailing winds—often drawn in sand on beaches at the Pacific’s verge. Years of learning to watch for birds and where they fly. How to measure a boat’s speed by counting bubbles in the water as they go past the hull. How to feel the direction of the ocean swell beneath the canoe, and separate it from surface waves—an art a master navigator could practice even while asleep below decks.

After learning all that came—enchantment.

“I’ll teach you how to go and come back, Mau told me, but I’ll never teach you the magic,” Thompson recalled. “You have to find that yourself. And that’s what it has been ever since for me—the magic of the stars and the canoes.”

In the years after that 1980 Tahiti-and-back voyage, Thompson and his compatriots at Polynesian Voyaging Society (PVS, founded by Kane and Finney) sailed Hokule‘a and her sister canoe Hikianalia to Rapa Nui (Easter Island); to Rarotonga; to New Zealand; to California.

During those thousands of miles of sailing, Thompson and his colleagues realized that Hawaiian voyaging is about more than proving wrong past generations of European academics. PVS voyages helped kindle the “Hawaiian Renaissance,” a resurgence of interest in traditional island culture, from food to language to chant and dance and spiritual practice. When Hokule‘a first sailed, Hawaiian was taught in the foreign language department at the University of Hawaii. Today, many students of Hawaiian ancestry are educated in their ancestors’ language until fifth grade. After Hokule‘a’s success, other islands formed groups to build and sail their own canoes. Wayfinding found its way into classrooms, even academic astronomy. Navigation courses sprang up, sponsored first by PVS, then spreading to other groups and locales. Thompson has been instrumental not only in wayfinding education, but in a concerted campaign to draw young women into the art. “This is a new era,” Thompson explained.

Today, in Hawaii, there are dozens of navigators qualified to guide traditional over-ocean voyages. Their role is not just to lead canoes, but to shape popular thought. “The classic Western view of the ocean is that it divides us,” said Timothy Lara, a Maui-based navigator. “The Polynesian view is that it joins us.”

But the 68-year-old Thompson is not done yet. Next year, Hokule‘a will depart Hawaii once again to circle the Pacific, a 41,000-mile journey to 46 lands and 345 ports that will span 42 months—a journey that more closely resembles those made by ancient Polynesian mariners at a time when European explorers almost never sailed out of sight of land.

But “magic,” to Thompson, includes something almost opposite the usual understanding of that word. A spare, compact individual who measures both words and deeds carefully, he balances risk with preparation—witness his years studying wayfinding under Piailug or, even more tellingly, the run-up to Hokule‘a’s global circumnavigation. Thompson said that intense, mind-numbing preparation is the key to success in such inherently risky ventures.

“I’ll go through things like charting a course a million times in my head,” he explained. “It frustrates people that I take so long. ‘Malama Honua’ took 37 months on the water, but it was actually a 10-year voyage because it was preceded by more than 6 years of preparation.” Many argued that the voyage should not happen at all—too dangerous—but Thompson countered that the greatest hazard was to do nothing. During the voyage, he refused to load Hokule‘a on a cargo ship to traverse the most treacherous waters around South Africa.

“Which is more dangerous, the hurricane or the pirate—or keeping Hokule‘a tied to the dock because we are too scared to go?” Thompson challenged naysayers.

Now, as Thompson and PVS get ready to sail around the Pacific, from Alaska to New Zealand to South America, he is as adamant as ever that acts of adventure must demonstrate purpose and value—recognition of common ground, for instance. Like most indigenous people today, Thompson’s heritage is broad, including Hawaiian and European. “Navigation is more than just sailing,” Thompson argued. “Humanity needs to come together based on values. This world is worth it, and we don’t have another one.”

Like all true great leaders, he has a unique ability to exemplify and convey universal truths in a way that appeals to everyone. He balances risk and caution wisely, but he refuses artificial safety.

“What I value most are home and family,” he said. “And really, that’s our whole planet. The Way of the Canoe offers a pretty good roadmap for human society.”

So, if you ask Thompson to name his legacy, his answer is as clear as his life has been.

“I stood up for something that matters.”

Wa‘a—The Way of the Canoe

• Take care of your canoe

• Take care of your crew

• Be prepared for weather