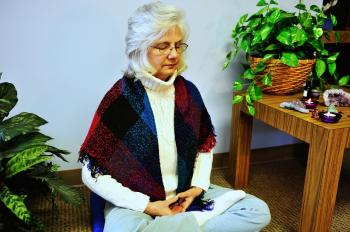 Not only does meditation help slow down the aging process, it also provides inner peace, reduces the risk of disease, and can even add years to your life. (Cat Rooney/The Epoch Times)
Health

Meditation Enhances Mood in Only 5 Weeks

“Relax with your eyes closed …” is something people ought to try, according to a new study to be published in the journal Psychological Science that associates short periods of meditation with positive mood changes.

Previous studies also examined the positive neurological effects of meditation in individuals, including a 2010 paper on meditation’s effect on attention span.

Jane Anderson, an undergraduate at University of Wisonsin-Stout, was inspired to carry out a new study after trying meditation for a month and noticing positive health changes.

“My experience was a sense of calmness, of better ability to regulate my emotions,” Anderson said in an Association for Psychological Science news release.

With a team of students and faculty members, Anderson measured the electrical activity of 21 people’s brains using electroencaphalograms (EEG), while they were asked to meditate.

Eleven of the participants were offered two half-hour meditation trainings per week, and were encouraged to practice in between training sessions, while the remaining 10 people did not receive training.

On average, the 11 participants completed seven hours of meditation training and practice during the five weeks. Further EEG recordings were conducted after the five weeks.

Positive emotions are related to this type of brain activity as demonstrated in previous research.

“It can’t hurt and it might do you a lot of good,” says co-author Christopher Moyer, describing the effects of meditation to the APS.

“If someone is thinking about trying meditation and they were thinking, ‘It’s too big of a commitment, it’s going to take too much rigorous training before it has an effect on my mind,’ this research suggests that’s not the case.”

Previously, Anderson struggled with seasonal affective disorder in the late 1990s while living in Minnesota. Her findings concur with her experience.

“I think this implies that meditation is likely to create a shift in outlook toward life,” she concludes. “It has really worked for me.”