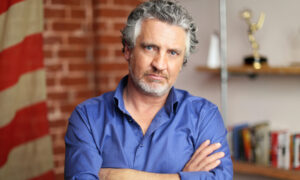 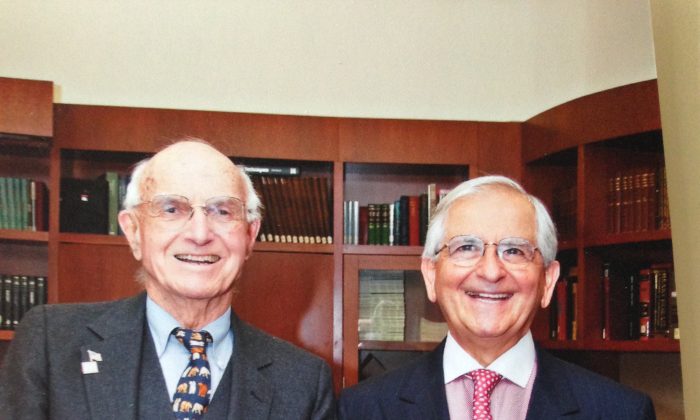 Dr. Joseph E. Murray, Nobel Laureate, (L) and Dr. Simon J. Simonian on the occasion of the Joint Murray-Simonian Prize for Research Excellence in Surgery awarded for the best research work by both a mentee and a mentor at Brigham and Women’s Hospital, Harvard Medical School, Boston, Mass., awarded each year in perpetuity. (Courtesy of Simon J. Simonian)
Health News

An Interview With Simon J. Simonian
By Shelley B. Blank
biggersmaller
Print

Simon J. Simonian is a respected enhancer of human health, culture, and society. He has served on the faculty of Harvard University, is the co-author of 300 articles and books, and is co-authoring a book on “Cultures of Peace.” He was educated at Harvard and Oxford Universities, in which seven Simon Simonian Prizes are now awarded each year. Dr. Simonian was on the team that was nominated for a Nobel Prize for eradicating smallpox and serves as a consultant in the Simon Simonian Prizes, awarded each year at Harvard and Oxford Universities.

He is recognized as a participant in the eradication of smallpox and as one of the leaders in the establishment of immunogenetics, kidney transplantation, phlebology, and lymphology as new medical specialties. He co-established the first successful Venous Vascular Phlebology program at Georgetown University Hospital. He has lectured extensively both nationally and internationally. He is the co-author of over 300 articles and four books that span his four major research interests: immunology and immunogenetics, organ transplantation, venous vascular disease, and lymphatic vascular disease. He’s also the record holder since 2010 of the largest-sized contemporary autobiographies ever published by Marquis Editorial and Publication Board in their entire history since their establishment in 1899, of more than 300 lines to the standard 20 lines allotted normally; in Who’s Who in America, Who’s Who in the World, Who’s Who in Science and Engineering, and Who’s Who in Medicine and Health Care.

Two million people died annually from smallpox until 1977, when Dr. Simonian was recruited to join Dr. Leslie Collier’s research team. That research team produced the first freeze-dried, heat-stable, globally effective smallpox vaccine, which was subsequently used by the World Health Organization (WHO) to eradicate smallpox—the first time in history that a disease had been completely eradicated throughout the world.

Please share in the following conversation with the man who has helped save approximately 70 million lives since 1977, and consider the thoughts of this award-winning scientist who travels the world speaking out on behalf of spiritual health and the healing strength of human harmony as a remedy for violence. This interview took place at Pacific Palisades, Calif.

SBB: Dr. Simonian, you have an international reputation both in the medical field and as a social and civil rights activist. What medical breakthrough projects are of concern to you at this time? And how would the public be best made aware of how to benefit from this breakthrough?

SJS: “Precision medicine” promises and translates the big data of the patient, including genetic sequencing and medical sciences, into new life-saving and life-enhancing breakthroughs from life-threatening diseases. Precision medicine will change the paradigm by improving the health of individuals and populations at lower costs. Precision medicine offers new benefits in both the treatment and prevention of diseases.

SBB: What global concerns and social issues are you most concerned with presently? For example, I know of your impressive international efforts to pursue an open and historically correct admission from the Turkish government of the policy that created the Armenian genocide of 1915, which killed 3 to 5 million unarmed Armenian men, women, and children.

SJS: Yes, my friend, let me say here, that you and your newspaper, The Epoch Times, did impressive work in writing some articles on this subject, as a matter of fact, a copy of which I sent to Archbishop Hovnan Derderian, the Archbishop of the Western Armenian Archdiocese.

But, we must keep in mind that genocide is an issue of concern to peoples of all faiths and religions. It is a global issue of the collective human soul and spirit. For example, on Sunday, April 12, Pope Francis announced in his mass at St. Peter’s Basilica to commemorate the 100th year centenary, that these killings of 1.5 million Armenian people be declared by their rightful name: genocide. His Holiness is coming to the United States later this year, and I have taken the liberty of writing His Holiness, commending him on his historical stance on this matter. All people of goodwill should address this historical aberration so that our past will be a reality of responsibility to the future. And because people of goodwill did not do anything about that first collective homicide of that century, other genocides followed in its tragic path: the Jewish holocaust, the Khmer Rouge mass slaughter. We must honor the future by truthfully recording the past, out of respect for those killed and those who will live on.

SBB: What would you say is the main reason the Turkish government, over the years, has refused to acknowledge this historical fact?

SJS: Any acknowledgment brings forth the question of reparations. But we must keep our minds, our hearts focused on the humanity of this aberration. Yes, of course, properties should be returned, family funds restored. But it is vitally important to keep in mind our spiritual goals of restoring the treasure of historical truth, of finally acknowledging that these who were killed were human beings whose lives deserved a true place in history, that their life be given the recognition of where, when, and how they lived and how they died.

SBB: Simon, you once told me that as a scientist, you believed that “there could be paradise on earth.” Please expand on that concept.

SJS: The experience of paradise on earth is our common human evolutionary journey and destination. We enter paradise when we daily practice interdependence, respecting and appreciating our biological and cultural differences as positive assets—positive assets that can and should be used as social tools to resolve our complex problems and provide solutions to our complex needs. Evolution is humanity’s true wealth, and this is an inherited treasure, a treasure we must invest in and share the dividends and riches with each other and with this planet that we are here to care for, as it nourishes our needs.

We must practice friendship as one global family, with faith and joyful compassion and let love, nonviolence, equality, justice, cultural and social concerns enhance our reverence for life, and be our compass to what could be our destination, the entrance to a paradise on earth.

There are five principles that need our attention: