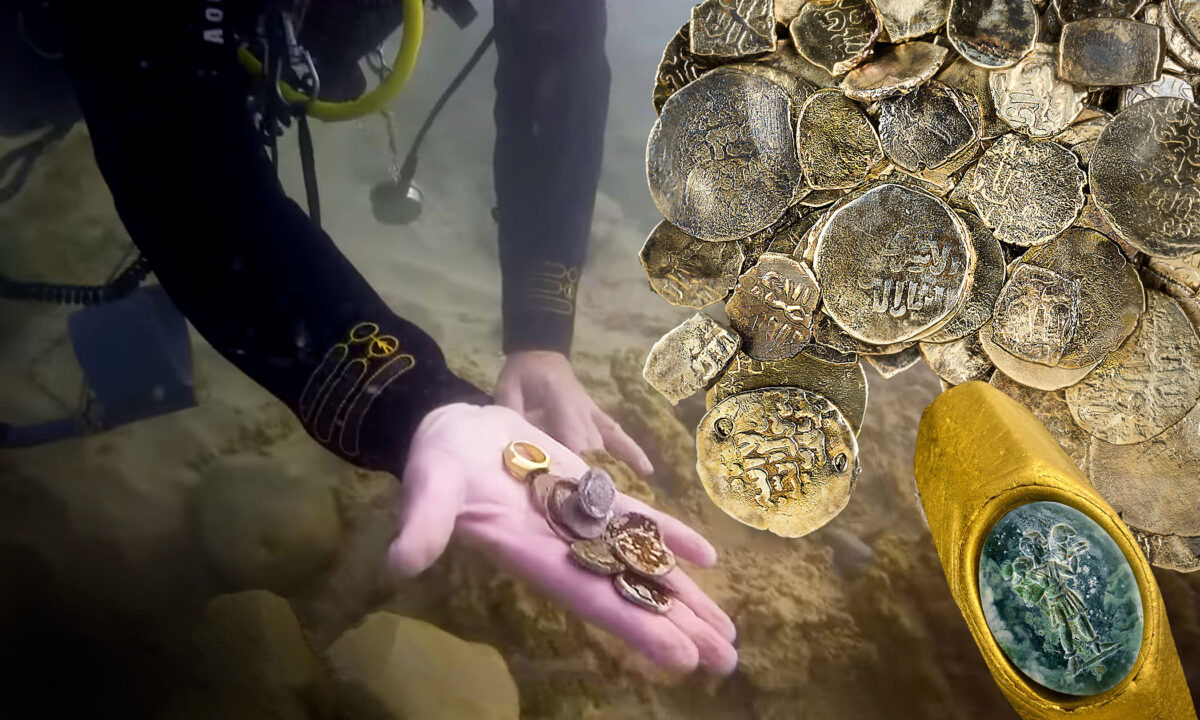 A broken iron anchor, hundreds of years old, attests to a storm that foundered one of two ancient shipwrecks—from the mid-3rd and 14th centuries—which were discovered in the same location off the coast of Caesarea, Israel. Their antiquated cargos yielded nothing short of treasure preserved by the low-oxygen environment under the sea.

While conducting an underwater survey, divers from the Israel Antiquities Authority’s Marine Archaeology Unit located the remains of two wrecked hulls scattered across the seafloor in shallow waters at a depth of about 4 meters, finding dozens of large bronze nails, lead pipes from a bilge pump, the said anchor, and a sounding lead for measuring the depth of the seafloor.

Also produced were treasures from the ship’s cargo—including hundreds of silver and bronze Roman coins from the first to third century; a large hoard of about 560 silver dirham coins from the early 1300s, during the Mamluk period; a bronze eagle, symbolizing Roman rule; a pantomimus (Roman performer) figurine in a comic’s mask; several bronze bells, for warding off evil spirits; as well as several pottery vessels.

“Coins are important for understanding the economy of this period,” said Dr. Robert Kool, head of the Authority’s Department of Coins. “We know a lot from documents, but actually from the archaeological material, we have very few finds.”

Even more interestingly perhaps, the archaeologists stumbled on a number of rare personal effects of long deceased ocean farers, including a red gemstone (which would have been set in a “gemma ring”), featuring a carved lyre (known in Israel as a kinor David or “David’s harp”); found nearby was a stunning octagonal gold ring set with a green gemstone engraved with a young shepherd carrying a ram or sheep on his shoulders. This design is believed to represent the “Good Shepherd,” one of the earliest and oldest Christian symbols for Jesus, tending his flock of humanity.

“This unique gold ring bearing the figure of the ‘Good Shepherd’ gives us, possibly, an indication of its owner, an early Christian,” the Authority stated in a press release. “The ring was discovered near the port of Caesarea, a site of great significance in Christian tradition. Caesarea was one of the earliest centers of Christianity and housed one of the first Christian communities.” This was where the apostle Peter baptized the Roman centurion Cornelius, they noted, the first instance of a non-Jew being accepted into the Christian fold, according to the Bible.

As for the storm that ravaged these two ships—which date some one thousand years apart from each other—they may have been anchored offshore for fear of difficult conditions or stormy weather, the Authority stated, because sailors know that mooring in shallow, open water outside of a port can be dangerous or lead to disaster. “The harbor is the most dangerous place for the ship,” said Jacob Sharvit, director of the Authority’s Marine Archaeology Unit. “That’s why we have in this small anchor site many places that we can find many shipwrecks from different periods at the same place.”

Israel’s coasts are “rich in sites and finds that are immensely important national and international cultural heritage assets,” said Director of the Authority Eli Eskozido, adding that the ships are also “extremely vulnerable,” which is why the Authority conducts underwater surveys “to locate, monitor, and salvage any antiquities.”

“There are many kinds of sporting activities along Israel’s shores, including diving, snorkeling, open water swimming and sailing, during which antiquities are occasionally discovered,” said Eskozido. “We appeal to divers: if you come across an ancient find, take a note of its underwater location, leave it in the sea and report it to us immediately. The discovery and documentation of artifacts at their original find spot has tremendous archaeological importance and sometimes even a small find leads to a great discovery.”