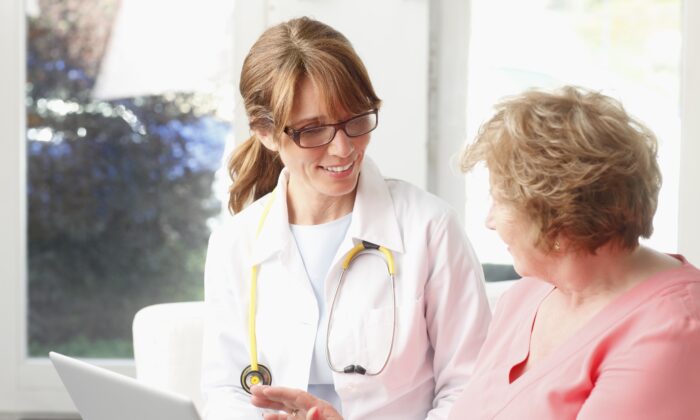 Some women can get great relief from difficult menopause symptoms with natural treatments. Others will appreciate hormone replacement therapy. (Kinga/Shutterstock)
Mind & Body

Many Options for Menopausal Difficulties

Menopause is a natural process, but the discomfort may call for a variety of treatments
By Peter Weiss

The definition of menopause is simply the natural end of a woman’s menstrual cycles. While the average age for a woman to enter menopause in the United States is 51 years old, there is some familial tendency, so you may follow your mother’s pattern.

This is a very natural part of aging but can happen as early as 40 years old or younger. We call that “premature ovarian insufficiency” or simply, “premature menopause.”

Menopause is basically when the ovaries stop producing estrogen.

A woman today can live a healthy and productive life well into her late 80s and beyond. A woman can spend more than 40 years in menopause. What does that really mean?

There is a confusing term, post-menopause, which really is just the time after the onset of menopause.

If menopause is a natural process, why is so much attention applied to “treating” it? There really is no such “treatment,” just as there is no such treatment for aging. Yes, we can improve our health, exercise, eat well, and take supplements, but we all age, and all women will enter menopause if they live long enough. With menopause, as with any time in our lives, we want to stay healthy and feel well.

T.K. was a 45-year-old patient of mine; she had two kids and was an accomplished writer.

Her periods were starting to spread out, and she was complaining of hot flashes, night sweats, and difficulty sleeping. Her hormone levels were below the laboratory definition of menopause, but she sure was close. She wanted relief.

There is no one magic pill that covers everything. The first step is deciding if you want anything at all. Remember, menopause is a natural process, and yet I agree that just like aging, I don’t want it to happen too fast.

T.K. was started on several good supplements, with black cohosh and soy. She showed some improvement and then added magnolia bark and Damiana, a shrub native to Mexico.

She was satisfied with the results and had no other major issues.

At the same time, I had a patient, C.M., who was 51 and had severe hot flashes, sweats, no period for seven months, and was miserable. She tried the same regimen and more. She had no improvement whatsoever. She wanted relief. This is where hormone replacement therapy (HRT) can have a positive effect. HRT is not for everyone, but there’s a place for it in helping women who are suffering. HRT isn’t the first line of therapy, but it can be very effective.

The drug premarin was developed in 1941 and became a mainstay for hormone therapy in the 1970s. It’s made from horse urine; in fact, the name comes from PREgnant MAres’ urINe. Very few physicians use premarin in the U.S. anymore, and they shouldn’t. I haven’t prescribed it in over 30 years.

Bioidentical hormones have the same molecular structure as hormones made by your body. Premarin and the progesterone Provera aren’t bioidentical. We now use plant-based Estradiol, plus other types of estrogens, which are bioidentical, as well as micronized progesterone, which also is bioidentical. These newer formulations can be compounded by many pharmacies and tailored for the patient’s needs. Bioidentical estrogen and progesterone are also made by large pharmaceutical companies and are well tolerated by most patients.

HRT has its pros and cons, but this isn’t the format for that discussion. We try to limit the use for just the specific indications and taper women off as soon as possible. C.M. had remarkable relief from symptoms that were affecting her day-to-day life, so HRT for her was the best choice. Each person must be treated individually. Different patients need different therapies.

Not all menopausal symptoms are just hot flashes and night sweats. Several years after the start of menopause, women can begin to experience what we call genitourinary syndrome of menopause (GSM). Those are big words to describe extreme vaginal dryness, pain with sex, bladder irritation, nocturia (having to get up to pee several times a night), and hesitancy, which is always having the feeling like you have to pee. Obviously, these symptoms can be quite debilitating and difficult to treat.

GSM can be a real problem for many women. I tend to see a lot of these women as referrals for difficult situations. The first line of therapy is simple basic natural oils, such as grapeseed, olive, sweet almond, and coconut oil to name a few. There are also over-the-counter vaginal moisturizers such as Luvena, Replens, vitamin E suppositories, and others. If none of those work, your doctor or nurse can give you vaginal estrogen cream or suppositories as well.

Menopausal vaginal tissues tend to get atrophic (dried out) after several years in menopause, due to the lack of estrogen. Bioidentical vaginal estrogen as well as several “pre-estrogens”  can be used as well to help those vaginal cells regrow into healthy thick cells and provide moisture to the vagina. There is also a relatively new technology called a Mona Lisa touch laser, which uses a CO2 fractional laser to stimulate the body’s own reparative process to produce those healthy moist vaginal cells. This laser has been especially useful for women survivors of breast cancer who can’t or are afraid to use estrogen.

The bottom line is that women in menopause now have a large variety of therapies available to them to help their particular condition. The best advice is to start with the simplest most natural therapy and go from there.

An unknown author said it best: “Difficult roads often lead to beautiful destinations. The best is yet to come.”