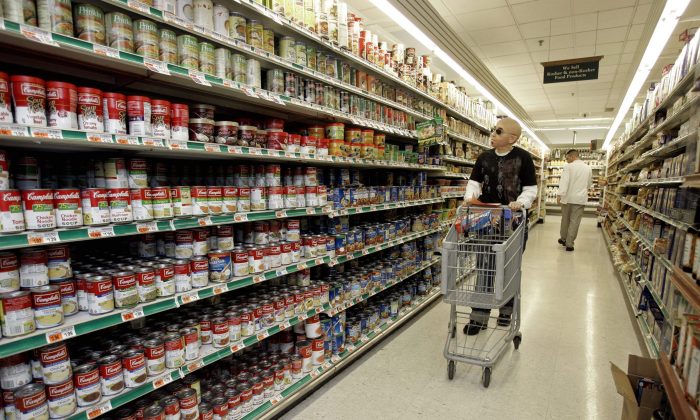 A new study suggests more than half of Canadians, especially those with health conditions, are worried the foods they're buying are not what labels claim. (AP Photo/Richard Drew)
Canada

TORONTO—A new study suggests more than half of Canadians, especially those with health conditions, are worried the foods they’re buying are not what labels claim—and preventing falling victim to such scams can be difficult, experts say.

In an online survey conducted by researchers at Dalhousie University, 63 percent of respondents said they were concerned about the widespread practice known as food fraud. Notably, worries about counterfeit food products coming from Canada were even greater in those study participants with food intolerances.

That’s likely because the fallout for someone with allergies eating a mislabelled product can be severe, says lead researcher Sylvain Charlebois. He calls food fraud “the big elephant in the room.”

“People are aware of the problem, they just don’t know how to deal with it,” Charlebois said.

“They count on that to be accurate and truthful and complete in order for them to make a decision of whether that would be a suitable product or not,” she said, adding that deliberate ingredient substitutions are not on the organization’s radar at the moment.

Olive oil is the perfect example of a product that frequently contains unlisted ingredients.

Olive oil is the perfect example of a product that frequently contains unlisted ingredients, according to Larry Olmsted, author of “Real Food Fake Food.” Sometimes it’ll be watered down with peanut or soy oil, he says, both of which are allergens.

The Canadian Food Inspection Agency receives an average of 40 complaints annually from consumers about potential food misrepresentation, spokeswoman Lisa Murphy wrote in an email, and it investigates each case.

The CFIA has studied the scope of the issue and determined concerns include short-weighting products, substituting ingredients, and making false and misleading claims about products.

It also has several programs to monitor certain types of food for fraudulent products, such as olive oil. Between 2006 and 2007, more than 45 percent of tested samples did not meet the country’s criteria for the product, according to a 2013 presentation by CFIA before a European Commission workshop on olive oil authentication. By 2012 to 2013, that number dropped to more than 30 percent.

Food fraud is a financially motivated practice, Charlebois said, and it is often done to increase the price an item will sell for or to lower the cost of making it.

Seafood is the most vulnerable food group, he noted, because it’s difficult to track where those products came from and hard to distinguish between fish species visually once it’s a fillet on a store shelf.