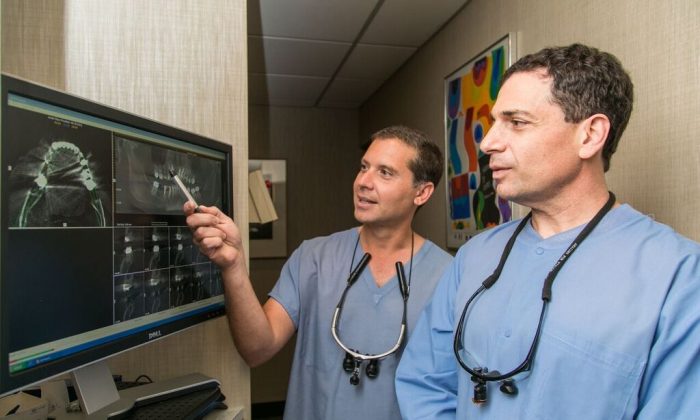 If you or a loved one has chronic bad breath, it might be caused by something other than your daily cup of coffee. It could actually be a sign of periodontal disease, a gum infection that can travel to other parts of your body.

Periodontal disease starts when tartar and bacteria get trapped under the gum line. In the early stages, you may notice bleeding after brushing. More serious signs include swollen or discolored gums, spontaneous bleeding, and chronic bad breath.

So if you’re ignoring these signs because you think it’s normal, think again.

“Untreated gum disease is constantly seeding bad bacteria into the bloodstream,” said Dr. John Lanzetta, a periodontist at Madison Avenue Periodontics who specializes in advanced dental laser surgery. He said the bacteria contribute “to blood-clot formation in vessels around the heart, leading to stroke and heart attack.”

And there are other diseases, like diabetes, that become riskier if you continue to ignore your bleeding gums.

Many people prefer to ignore their bleeding gums because of dental anxiety, fear of high cost, or thinking they’re just too busy.

Unfortunately, many people prefer to ignore their bleeding gums because of dental anxiety, fear of high cost, or thinking they’re just too busy.

The team of skilled periodontists at Madison Avenue Periodontics has a solution to those worries: FDA-approved LANAP laser gum surgery, a cheaper, noninvasive surgical procedure that selectively kills disease-causing bacteria without a scalpel or sutures, and with minimal bleeding and recovery time.

Click here to stop your bleeding gums from ruining your health.

LANAP (Laser Assisted New Attachment Procedure) is a protocol that uses the PerioLase MVP-7 laser to gently remove bacteria and diseased soft tissue from the gums and regenerate bone around the tooth.

The laser was originally FDA-approved for soft tissue repair. In April, the FDA also approved LANAP for its ability to regenerate bone, which is typically cut away during conventional surgery.

Dr. Chris Chondrogiannis, a periodontist who is part of the team at Madison Avenue Periodontics, said the FDA is very strict about what true regeneration is.

To meet the FDA’s standards, the laser must be able to regenerate bone so that it is attached to the tooth. And that is not readily seen on an X-ray, but it can be proven microscopically.

“We take sections, and you [can] show bone with a ligament attached to a tooth, and that’s true regeneration,” Dr. Chondrogiannis said.

For about 40 years, the gold standard for bone regeneration has been conventional surgery using bone grafts, growth factors, and other biological materials. The risks include swelling, bleeding, and considerable post-op pain.

Dr. Chondrogiannis explained that the laser can “actually recreate bone by the way it stimulates the existing blood.”

Because the laser can treat and repair gum disease, patients spend less time in the dentist’s chair, have a shorter recovery time, and a lot less pain. Patients usually only have to follow up for two visits.

It seems too good to be true, so people expect LANAP to be more expensive than conventional surgery.

“In fact, it’s a lot less expensive because we don’t need to use the bio-material,” Dr. Lanzetta said, referring to bone grafts and other kinds of materials used to stimulate bone.

In addition, patients with chronic diseases don’t have to stop taking their medications.

For example, heart patients who take blood thinners like Coumadin, Plavix, and Xarelto would have to stop the medication while undergoing conventional surgery—to reduce the risk of increased bleeding. Or they might not be candidates for surgery in the first place.

The LANAP procedure allows patients to continue taking their medications because the properties of the laser create stable blood clots, Dr. Chondrogiannis said.

Also, the laser is noninvasive, so the patient is less prone to post-operative infection, Dr. Lanzetta said. You get all of these benefits with “as good, if not better results,” he added.

The dentists at Madison Avenue Periodontics recommend LANAP for laser gum surgery because it’s convenient, and it improves the health of your entire smile.