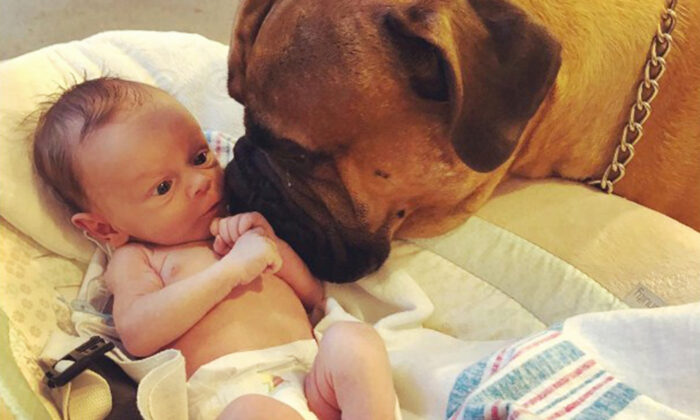 It can be a delicate and unpredictable process, navigating the relationship between a beloved family pet and a newborn baby. But for one family from northern California, there could be no doubt that their 3-year-old bullmastiff was looking out for their infant son from the very beginning.

Bonnie Michalek and her husband welcomed their “first baby,” bullmastiff Brutus, into their family as a puppy in 2016. The sweet pup quickly became the couple’s best friend and Bonnie’s fierce protector, especially after Bonnie discovered she was pregnant with their first human child.

“[H]e definitely sensed it before I knew,” Bonnie marveled, speaking to The Dodo.

Bonnie recalled how Brutus would refuse to sleep in his crate on the nights when her husband was working and the expectant mom was home alone. “Looking back I thought he was just being a brat,” Bonnie reflected, “but really he was trying to protect me.”

The couple had very few misgivings about how Brutus would behave once the baby was born. “He’s always loved kids,” Bonnie explained. “Every time he’s heard kids outside laughing he gets excited.”

Brutus was so excited, in fact, that he showed no hesitation in greeting baby Kayden with a loving lick on the face the first time his parents brought the baby home in January 2018; it was love at first sight. “Brutus completely bypassed my husband to meet Kayden,” Bonnie recalled. “He immediately wanted to give him kisses and snuggle up to him.”

From that moment on, Brutus and Kayden’s adorable interactions have been immortalized on Instagram for the family’s 15,000 followers to enjoy.

One gesture in particular convinced Bonnie and her husband that their newborn baby boy and their loyal pup were destined to become best friends. Whenever Kayden would cry, Brutus would seek out his favorite toy to comfort him.

“It’s the only toy that he won’t tear apart in five minutes,” Bonnie said, speaking to The Dodo of the soft yellow ball that Brutus chose to soothe baby Kayden with.

“Here, bro, you can have my fluff ball,” Bonnie wrote beside a photo of the sweet interaction on Instagram, adding, “side note: every time Kayden cries, Brutus finds his fluff ball and tries to bring it to K. So cute.”

Brutus’s benevolent action showed just how deep his love for his new baby brother really was; from that moment on, bringing the soft yellow ball to Kayden became Brutus’s caring, knee-jerk response every single time he heard the baby start to wail.

Kayden’s parents were not the only people to find the sweet dog’s gesture heartwarming. “That touched my heart, beyond adorable,” one person online commented. “Precious babies, both. Thank you for sharing this, it made my week.”

“You guy[s] are so blessed,” wrote another, “and you can see the love and smiles and proud demeanor of your beautiful dog.”

According to the American Kennel Club, bullmastiffs are typically affectionate, loyal, and brave. Describing the breed as “biddable and reliable creatures,” the AKC says that bullmastiffs are usually fearless at work and docile at home; the latter describes Brutus in a nutshell.

After witnessing their “two boys” getting on so famously, the Michaleks started looking forward to resuming their summer tradition of visiting their cabin and enjoying long hikes under the summer sun.

After the loyal dog took to his new protective role like a duck to water, it seems Kayden has a friend for life in “big brother” Brutus.