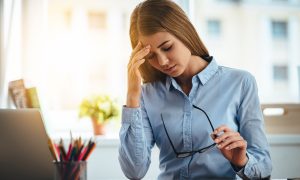 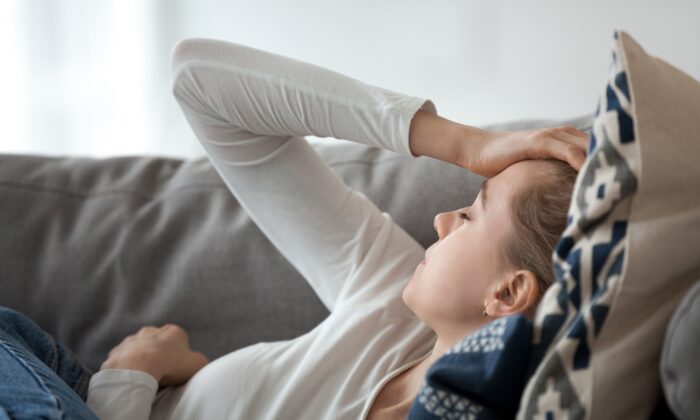 Chronic fatigue (CF) plagues many patients with lingering COVID-19, but unlike many CF patients, at least they won’t be told it’s all in their head. (fizkes/Shutterstock)
Mind & Body

Four weeks after San Diego pediatric nurse Jennifer Minhas fell ill with COVID-19 in March 2020, her cough and fever had resolved, but new symptoms had emerged: chest pain, an elevated heart rate, and crushing fatigue. Her primary care physician told her she was just anxious, and that none of her other COVID-19 patients had those issues.

“That wasn’t what I needed to hear,” Minhas said.

At times, she’s been too exhausted to hold up her head. “I was kind of a zombie for months, shuffling around unable to do much of anything.”

The clinical term for the flattening fatigue Minhas describes is “post-exertional malaise.” It’s a common symptom among patients who haven’t recovered from COVID-19. It’s also consistent with a standard feature of another chronic illness: myalgic encephalomyelitis, also known as chronic fatigue syndrome, or ME/CFS.

ME/CFS patients also report cognitive impairment—“brain fog”—and orthostatic [standing upright] intolerance, in which standing upright produces a racing heart rate and lightheadedness. Minhas has experienced these symptoms, as have many other “long haulers,” the tens of thousands of post-COVID-19 patients who haven’t recovered.

The percentage of COVID-19 patients who become long haulers is hard to pin down, in part because many early COVID-19 patients weren’t tested in time to detect the virus. But “long COVID” is potentially an enormous problem. A recent study of 1,733 COVID-19 patients in Wuhan, China, found three-quarters of them still had symptoms six months after being released from the hospital.

As of January, doctors had documented more than 21 million cases of COVID-19 in the United States. “If just 5 percent develop lingering symptoms,’’—about 1 million cases—“and if most of those with symptoms have ME/CFS, we would double the number of Americans suffering from ME/CFS in the next two years,” Harvard Medical School professor Dr. Anthony Komaroff wrote recently in the Harvard Health Letter.

The cause of ME/CFS is unknown, but multiple studies have found it follows acute viral infections— everything from the 1918 Spanish flu to Ebola. “A certain percentage of people don’t recover,” said Leonard Jason, a researcher at DePaul University.

Scientists are trying to figure out the mechanisms of the disease and why it develops in certain people and not others. According to the Centers for Disease Control and Prevention, ME/CFS shares certain characteristics with autoimmune diseases, in which the immune system attacks healthy tissue in the body. Multiple studies are underway to explore this and other potential causes.

Doctors who specialize in treating ME/CFS are beginning to pivot to long-COVID-19 patients. Dr. Peter Rowe, whose clinic at Johns Hopkins is one of the country’s leading centers for ME, has so far seen four long haulers at his practice. “All of them meet the criteria for ME/CFS,” he said.

Despite years of research, there is no biomarker for ME/CFS, so blood tests are ineffective as a diagnostic tool. Rowe’s approach is to tease apart which symptoms may have identifiable causes and treatments, and address those. One example: A 15-year-old boy Rowe was treating for ME/CFS was so sick that even sitting upright a few hours a day exhausted him and made schoolwork virtually impossible. The boy’s heart rate while lying down was 63; when he stood up it skyrocketed to 113. This effect is known as postural orthostatic tachycardia syndrome, or POTS.

Rowe knew from interviews with the boy’s mother that he had an extraordinary appetite for salt. So much so that he kept a shaker at his bedside and would regularly sprinkle salt on his hand and lick it off.

Rowe hypothesized that he was dealing with a sodium retention problem. To counter it, he prescribed the steroid fludrocortisone, which promotes sodium resorption in the kidneys. Three weeks later, the boy had recovered so dramatically he was helping a neighbor with a landscaping project, pushing rocks around in a wheelbarrow. “He was a different kid,” Rowe said.

Such a course of treatment wouldn’t be applicable in a typical case, Rowe said, “but it does emphasize the potential for patients to get a substantial improvement in their CFS symptoms if we address the orthostatic intolerance.”

Beginning in the 1980s, many doctors treating ME/CFS prescribed a combination of cognitive behavioral therapy and an exercise regimen based on a now-discredited assertion that the illness had no biomedical origin. That approach proved ineffective—patients often got demonstrably worse after pushing beyond their physical limits. It also contributed to a belief within the medical establishment that ME/CFS was all in your head, a narrative that largely has been refuted.

“ME/CFS was never a mostly behavioral problem, although it has been cast as that,” Rowe said.

Answers have been slow to arrive, but attitudes about the illness are beginning to change. Advocates of patients point to a 2015 report by the Institute of Medicine that called ME/CFS “a serious, chronic, complex, systemic disease” and acknowledged that many doctors are poorly trained to identify and treat it. The CDC says as many as 90 percent of the estimated 1 million U.S. patients with ME/CFS may be undiagnosed or misdiagnosed.

The problem is exacerbated by a reluctance to provide health care coverage to patients whose illnesses aren’t easily diagnosed, said Joe Dumit, a medical anthropologist at the University of California–Davis. “Making patients prove they are not just suffering, but suffering from a documented illness, saves money. So, I worry about the way in which COVID long haulers will be treated as the numbers rise.” The best treatment in many cases may be rest or reduced workload, “which translates into some form of disability coverage,” he said.

But since long haulers typically sicken immediately after having had a testable viral infection, perhaps they won’t be disbelieved, Rowe said. After all, their illness “starts as a ‘real’ illness.’’

Long haulers may also help researchers better understand the onset of the illness because they are being studied as their symptoms emerge, while ME/CFS patients often aren’t seen until they’ve been ill for two or more years, he said.

“There’s no question that this legitimizes in many ways the experience of people with ME/CFS who have felt they weren’t believed,” DePaul’s Jason said.

In July 2020, the nonprofit Solve ME/CFS launched an initiative aimed at understanding similarities between long haulers and patients with ME/CFS. Dubbed You+ME and underwritten by the National Institutes of Health, it includes an app that enables registrants to record their symptoms and their effects over time.

Such efforts may further diminish the tendency of doctors to ignore patients’ complaints of symptoms that seem to have no evident cause, said Lauren Nichols, 32, a long hauler with a long list of miseries—everything from severe gastrointestinal problems to shingles in her left eye.

“I was one of those people who falsely believed that if you can’t see the illness, it’s psychosomatic,” said Nichols, who helps administer Body Politic, a support group for long-COVID-19 patients that has found common cause with the ME/CFS community.

“Now I’m living it,” she said. “If I have one message for doctors, it’s ‘Believe your patients.’”