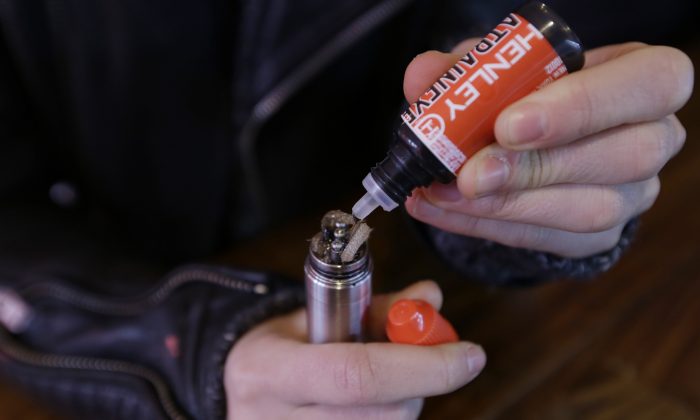 In this Feb. 20, 2014 photo, a liquid nicotine solution is poured into a vaping device at the Henley Vaporium in New York. E-cigarettes are usually made of metal parts combined with plastic or glass and come in a variety of shapes and sizes. They heat the liquid nicotine solution, creating vapor that quickly dissipates when exhaled. (AP Photo/Frank Franklin II)
Health News

Liquid Nicotine Teaspoon: ‘E-liquids’ in E-cigarettes Are Powerful and Lethal

Liquid nicotine is so lethal even a teaspoon of the liquid can kill a person.

Tiny amounts, whether ingested or absorbed through the skin, cause vomiting and seizures.

E-liquids are extracted from tobacco and “tinctured with a cocktail of flavorings, colorings and assorted chemicals to feed the fast-growing electronic cigarette industry,” reported the New York Times.

Like e-cigarettes, they’re not regulated. The liquids are typically placed inside the e-cigs but are detachable and come separately at some places.

Experts say that the liquids are attractive to young people, even children, because of bright colors and fragrant flavors.

“It’s not a matter of if a child will be seriously poisoned or killed,” said Lee Cantrell, director of the San Diego division of the California Poison Control System and a professor of pharmacy at the University of California, San Francisco. “It’s a matter of when.”

Reports of accidental poisonings, which typically don’t cause death but require hospitalization, are soaring. In 2013 there was one cast a day, triple the previous year’s number.

“This is one of the most potent naturally occurring toxins we have,” Cantrell said of nicotine. But e-liquids are now available almost everywhere. “It is sold all over the place. It is ubiquitous in society.”

The Food and Drug Administration says it’s planning to regulate e-cigarettes but hasn’t given specifics or a timeline yet.

“It’s the wild, wild west right now,” said Chip Paul, chief executive officer of Palm Beach Vapors, a company based in Tulsa, Okla., that operates 13 e-cigarette franchises nationwide and plans to open 50 more this year. “Everybody fears F.D.A. regulation, but honestly, we kind of welcome some kind of rules and regulations around this liquid.”