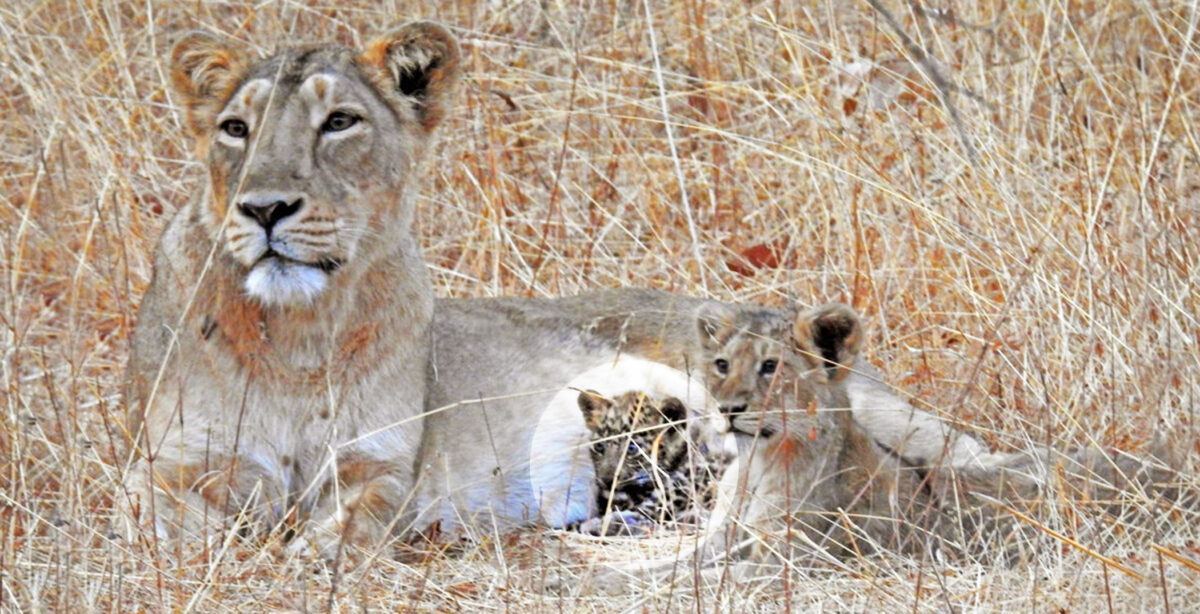 In a national park in India, a lioness “adopted” a leopard cub and treated him as one of her own. Researchers studied the strange pairing between two naturally competitive species. Sadly, the cub died before the whole adorable and strange phenomenon could be investigated further.

The unlikely family was first spotted in late December 2018 by forest conservation workers in the Gir National Park in Gujarat. Dheeraj Mittal, the deputy chief of conservation, told the Hindustan Times that he was astonished to see the unusual pairing, especially since “lions tend to kill leopards.” While in this case, the lioness was actually paying special attention to the cub, even going as far as slowing down, because she “understands that the leopard cub is not able to match her pace or that of her cubs,” Mittal added.

Stotra Chakrabarti, a postdoctoral at the University of Minnesota, along with a group of fellow researchers, published a case study documenting the “adoption” in The Ecological Society of America. According to Chakrabarti, while there have been rare cases of cross-species adoption, they usually broke up after a few days. This was the first noted case of a cross-species bond lasting and also the first noted between natural competitors.

As for how this strange pairing came to be, researchers are unsure. In the paper, they did note the presence of an older leopard female in the vicinity that might have been the cub’s natural mother. They believed that the cub either got lost or was abandoned by her before the lioness took him in. Chakrabarti did, however, say that the unusual adoption “was surely the most ‘wow’ moment I’ve come across,” per New York Times.

During the 45 days of observation, the lioness looked after the leopard cub by nursing him and sharing food as if he were her own. Even the other two lion cubs treated the little leopard as if he were part of the family. “It looked like two big cubs and one tiny runt of the litter,” Dr. Chakrabarti said.

The research paper concluded by calling this unlikely adoption “a case of instinctive parental care over offspring recognition.” And researchers believe that such cases, even if incredibly rare, are an opportunity to further our understanding of how animals behave and interact with each other.

Sadly, the baby leopard was found dead in February 2019. He had no injuries, and researchers concluded he died from a hernia that he’d been born with. They speculated this might have been the reason his birth mother abandoned him.

According to Chakrabarti, another factor that facilitated this unique pairing was the lack of any adult lion males around. Female lions tend to isolate themselves for the first few months after birth to raise their offspring. The researcher explained that the cub would have likely been identified as an impostor had he made it to adulthood and attempted to join the rest of the lion pride. “It would have been fantastic to see, when the leopard cub grew up, how things would be,” he added.