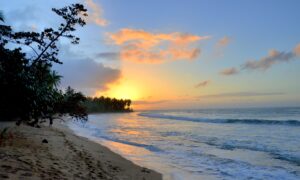 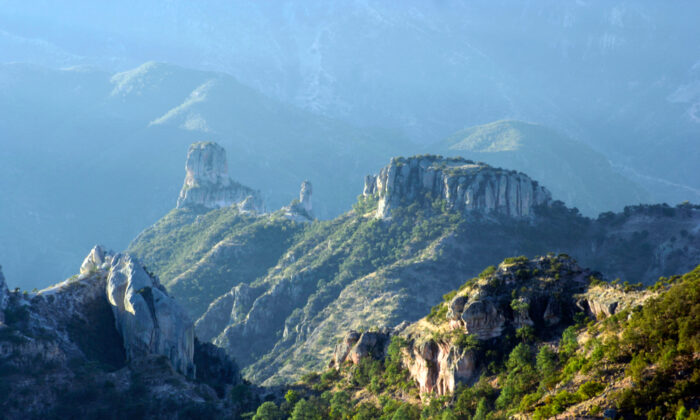 The Copper Canyon from above the rim at Urique, Chihuahua, Mexico. (William Hammer/Shutterstock)
Destinations

We tottered along a narrow footpath, our packs heavy with our water supply, and looked out into space to our right. From our hiking boots, a short steep slope of grass descended 10 feet, and there the land ended. Far beyond and below that edge, it reappeared, indicating we had quite a high cliff a short slip away.

Dan, a college professor a couple of people ahead of me, hadn’t strapped in his sleeping bag very well, and it started to dangle. We spoke up, but as he turned, the strap came loose, and the bag took two gentle bounces before disappearing over the edge.

Like guilty children, we looked ahead to our guide apologetically. He wore cheap sneakers, jeans, and a tattered baseball cap, and his belly suggested perhaps he had a weakness for snacking. Not the stereotypical outdoorsman. He said nothing, but to our horror, descended that steep bit of slope and stood at the precipice as if on the bottom step of his front porch and surveyed the invisible world below. Still wordless, he hopped back on the trail, jogged ahead, and disappeared over the edge while the rest of us gasped in unison.

An impossibly short moment later, we could see him moving along that distant slope, at least 100 feet down. Not five minutes later, he appeared back on our narrow footpath, where we stood motionless as mules waiting. In his hands, the sleeping bag. He passed it to Dan, and we continued our hike.

People of the Canyon

Our guide was of the Tarahumara people—the Rarámuri, in his own language, meaning “foot-runner” or “they who walk well”—an indigenous group in Mexico who had preserved their culture by disappearing into the vast system of canyons around us when the Spanish invaded the land over 400 years ago. The Rarámuri have a reputation for running long distances (and apparently steep ones), often while wearing sandals, and have competed in and won races and marathons in Mexico and the U.S.

This, the Copper Canyon or Las Barrancas del Cobre, was their home.

I had joined 10 others on a volunteer trip to a small town in the Mexican state of Chihuahua, a road trip with donations heading to an orphanage and free clinic. The 10-day visit had been set up between clergy contacts in Mexico and back in Wisconsin. After a week of work and some eye-opening educational introductions to poverty and the power of community, we had a couple of days to spare, and our two group leaders took us by train into the Sierra Madres to witness the natural beauty and meet the locals.

In terms of canyons, comparing the Copper Canyon to the Grand Canyon is like comparing apples to, well, different apples. The Grand Canyon was carved by the Colorado River over 5 million years ago. The river canyon runs for 277 miles, and at some points, the area is 18 miles wide and up to 6,000 feet deep. The colors of the rock shifting in the day’s passing sunlight run red to violet, especially at sunset; exposed rock dates to more than a billion years ago, in some cases. Nearly 6 million people visit each year.

As for the Copper Canyon, it’s comprised of six canyons covering over 25,000 square miles, making it many times larger than its grand northern compatriot, and with a canyon rim at an altitude as high as 8,200 feet, its depths can be even deeper. What roads exist are rugged, to put it generously, and none rides the edge. The best way to see it is hiking, and to get there usually requires a train ride.

Rails to the Trails

Completed in 1961, the Ferrocarril Chihuahua al Pacífico connects the city of Chihuahua in northwestern Mexico to Los Mochis on the Sea of Cortez, crossing the canyon and the mountains of the Sierra Madre Occidental range on a 400-mile route that includes 37 bridges and 86 tunnels. El Chepe, as the train is often called, is Mexico’s only passenger train, and it stops in several remote towns, including Divisadero, the continental divide where the train stops long enough for travelers to get out and ogle the incredible view. (In recent years, an adventure park opened here, with an 8,300-foot zip line more than 1,000 feet up in the air—not for the faint of heart. A cable car and glass-bottomed restaurant are also on offer.)

But none of this existed when I passed through years ago. My first trek was an overnighter from Creel, and we camped without tents under the darkest sky I’ve ever seen, with a blanket of stars framed by the rocks above. We soaked in a natural spring the next day before making the climb back out.

Back to the Canyon

The next year, I returned with a similar group, staying on the train much longer past Creel. We got off a couple of stops past the divide, hired a driver, and climbed into an open pickup truck. I stood behind the cab, arms spread to the world, wind in my hair as we raced across a dusty land to the canyon’s edge and then began a long, slower descent on short switchbacks to a village at the bottom. Twilight came and went, leaving our headlights reaching into the black emptiness at each tight turn, zigzagging our way into the earth, a ride that left several of us a bit queasy.

We camped at the edge of town, the canyon around us still shrouded in night, so when I stepped out of the tent in the morning sunlight to look up for the first time, the change seemed sudden. Rock rising high into the sky around me; a river rushing through scattered boulders a stone’s throw from camp; bougainvillea offering a fuchsia counterpoint to the layered earthy colors of the canyon walls. It was a perfect moment to begin our first hike.

Tours from Creel are most popular. The climate change from the highest points to the lowest is drastic. In winter, snow may fall upstairs, while midday the thermometer tops 75 degrees. Summer rains fill thirsty rivers; this is not the time to be at the bottom where the heat becomes stifling, heading into the 100s in some places. Choose September and October for gentler weather, with a green boost from summer precipitation. For both of my visits, I went in spring, which was also nice.