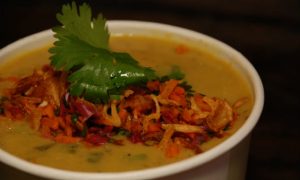 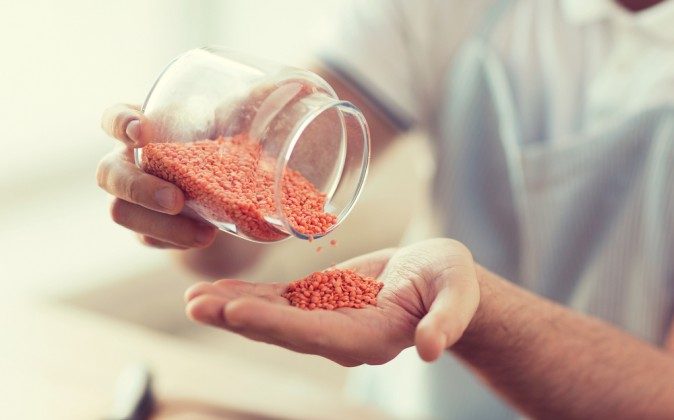 There are about 200 in 1cooked cup of lentils.

There is no doubt that lentils are one of the most versatile of all the legume family. Indeed it is not only their culinary usefulness that they are well known for.

In Egyptian times they were used as bubble packing for ancient artefacts and sculptures for shipping. The word lens is the Latin for lentil and derives its name from the shape of these little nutrition packed wonders.

The cultivation of lentils as a food goes back to well before the Egyptians, to Neolithic times (roughly 10.000 years ago). It was during this time that farming came about and lentils were one of the earliest crops to be cultivated, originating in the Middle East. It is no surprise then that there are so many references to the lentil in the Bible. The French dish Esau potage is a lentil broth named after Esau. In the Old Testament, Jacob bought the birthright from Esau with a dish of stewed lentils. Then there is the arguable notion that Lent was named after the lentil as the majority of people were too poor to be able to afford fish at this religious time and therefore had to rely on lentils for sustenance.

But it is for their culinary uniqueness that we are looking to this humble legume. There are few foods that are so versatile. They can be made into anything from pates, dressings, soups, dhals, fritters and salads.

They are packed full of beneficial nutrients as well as being a very rich source of soluble fibre, and being the third richest vegetable source of protein there is.

A study of dietry patterns and risk of heart disease following 16,000 middle aged men in the U.S., Finland, Netherlands, Italy, former Yugoslavia, Greece and Japan over a period of 25 years, found that after analysing the data, diets with a high legume content were associated with a huge 82% reduction in risk of heart disease!

Another study published in the ‘Archives of Internal Medicine’ confirms that a diet high in soluble fibre, such as lentils, helps prevent heart disease. Out of 10,000 adults, those eating the most fibre (21 grams a
day or more) had a 12% reduction in coronary heart disease and 11% less cardiovascular disease. Those that ate the most water soluble fibre fared even better.

The fact that lentils are excellent for heart health is not only in the fibre content, but also the significant amounts of folate (folic acid) and magnesium they supply. Folate has long been associated with heart health as it helps to lower levels of homocysteine. This is an amino acid that damages artery walls and is a serious risk factor for heart disease. When folate is present it converts homocysteine into cysteine or methionine, both of which are benign. Folate is also a crucial nutrient for pregnant women. Up to 70% of birth defects such as, spina bifida and  neural tube defects have been shown to be due to a lack of folate in the diet. Most doctors advise women of child bearing age to increase their intake of folate as it is not just during pregnancy but also prior to conceiving that there is a great need for folate.

The magnesium content in lentils adds another heart helping dimension. Magnesium is known to help the arteries and veins ‘relax’ which lessens resistance and improves the flow of blood, oxygen and nutrients throughout the body. Studies have shown that not only are low levels of magnesium associated with heart disease, but that after a heart attack low levels promote free radical injury to the heart.

It doesn’t stop there either. Lentils are an important source of B vitamins, particularly B-3. They are also high in iron, zinc and calcium, which is why they are so popular as a substitute for red meat. The iron is better absorbed by the body when eaten with vitamin C rich foods such as dark green vegetables. One of my favourite dishes is Indian spiced lentils, or dhal, with spinach stirred in at the last minute. A bowl of that with a hot naan bread makes a substantial and very healthy lunch for about a $1.00 a portion! Frugal food needn’t be bland and boring. It is high in protein too, being as good a source as some cheaper cuts of meat. Whilst they are deficient in only two amino acids, this is not the case once they have sprouted. When sprouted they contain sufficient amounts of all amino acids. In addition to this, their nutritional value goes up in sprouted form too.

Apart from the fact that they get a bad rap as being boring ‘hippy’ food, there is not a lot that you can say bad about the humble lentil.

Packed with goodness, nutrition and incredibly versatile as you will see in the following recipes. As with the acorn and mighty oak parable, these little guys should not be underestimated……

There are numerous varieties of lentils but some of the most common are:

These are perhaps the most common of all. They are good for soups and purees as they tend to puree when cooked and don’t hold their shape. A good use for them is to thicken stews or casseroles. Instead of reaching for the gravy granules or artificial thickener, try adding a good handful towards the end of cooking when making your next casserole. You’ll find it absorbs the excess liquid and provides a good protein boost to your meal.

Again these break down and become mushy if over cooked, but if cooked carefully they will retain their shape. They are good added to sauces or broths.

These are actually split mung beans and are very similar to red lentils except they are a bit firmer.

These are an incredibly attractive lentil, so called because when they are cooked they glisten like caviar. They retain their shape and remain firm when cooked. Excellent as an accompaniment to meals and also in sauces or dressings.

These to my mind are the king of lentils. Small and robust, they too keep their shape after cooking and are adaptable to a whole host of uses from pates to stuffing’s for vegetables to sauces and dressings. Green and brown lentils are also higher in nutrients than their red and yellow cousins.

Again these are actually a bean and if they are shelled and split they become white lentils. These are widely used in Indian cooking. It is no surprise that India is the biggest producer of lentils in the world. But it may come as a shock to know that Canada is the second highest producer!

*Images of “lentil stew” and “lentils” via Shutterstock