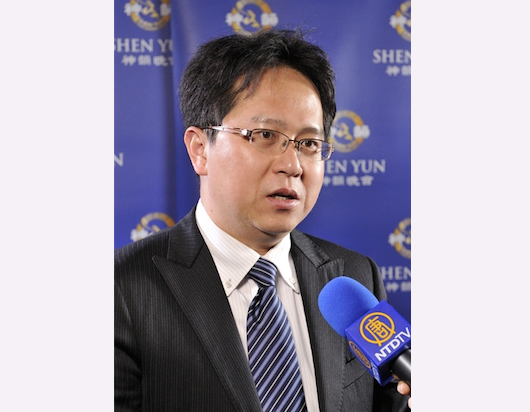 KAOHSIUNG, Taiwan—“It is the most touching performance I’ve watched,” said Chiu Chih-wei, a legislator, who saw Shen Yun for the first time at the Kaohsiung City Cultural Center on March 3.

Touring around the world to promote traditional Chinese culture for eight years, Shen Yun is, Mr. Chiu said, is helping the world to be full of peace and hope.

Every dance and song is deeply impressive, he said, and that we can feel the beauty of the traditional culture through the dancers’ movements.

“I could feel the spirit of truthfulness, compassion, and forbearance through the performance. I hope that the spirit be can passed on to all generations and every corner of the world through these performances.” Mr. Chiu said.

Mr. Chiu thinks that Shen Yun, inheriting the traditional Chinese culture, is educational for the youth in Taiwan. “Young people should not forget their roots,” he said.

“Only through receiving the essence of the culture can one learns how to behave properly, and to understand it in their lives.”

As to the fact that Shen Yun cannot perform in mainland China, Mr. Chiu said that the authorities should be broad minded with respect to their people, but the Chinese Communist Party is a totalitarian government with no law and order; however, the spirit that Shen Yun passes to people through culture and art will keep the world forever peaceful.

Headquartered in New York, Shen Yun Performing Arts was established in 2006 by a number of dancers and musicians, with the mission to revive the 5,000 years of divinely inspired Chinese culture. Illustrating ancient myths, historical legends and contemporary stories on the stage, Shen Yun leads the audience into a world transcending time and space to experience cultural wonders.

Mr. Chiu would recommend Shen Yun to his friends, telling them if they want “to understand the traditional culture in their lives, the best and the most ideal way is to [see Shen Yun and] be enlightened and inspired by the culture Shen Yun brings to people every year.”

“Not only come and see the show, but also help to promote it,” he said.

Tseng Che-Nan, an internationally renowned violin instructor and former Manhattan School of Music professor is now stationed in South-East Asia. He and his wife watched the New York-based Shen Yun Performing Arts on March 3 as well.

Mr. Tseng was amazed by Shen Yun’s production, “Each year it has a very different production; it’s unbelievable … it’s just hard to come by such a great performance.”

He said, “I think Shen Yun’s general director is a genius.”

One of the unique features of Shen Yun is the live orchestra combining traditional Chinese instruments with classical western instruments. Mr. Tseng believed that it was able to calm people’s mind.

He said, “There is also fast music but the melody was well arranged, so no matter how I listened to it, it makes me feel peaceful and calm.”

He added, “The music is rich in Chinese style but it’s not the rigid kind. It works magically well with the dancing!”

Also at the performance was Mr. Kuo Shun-fa, chairman of Beauty Salons Materials Association and the owner of a cosmetic boutique company. He was deeply touched by the perfomance.

As soon as the opening program Grand Descent of the Deities was presented, Chairman Kuo said he felt the spiritual message of Shen Yun. He said, “Shen Yun conveys the long history of our Chinese culture.”

Shen Yun’s high-tech animated digital backdrops can seamlessly link performers with the story dances, and let the audience have a miraculous feeling of transcending time and space as if they were personally in the scenes.

“It seemed so real,” Chairman Kuo said, when recalling the stage effects. “It was so amazing to combine the traditional culture with modern technology.”

He added that he could “feel the harmony between the dancers and the traditional spirit of benevolence.

Another audience member was Lin, a Taiwanese entrepreneur, who has business in China and often travels between Taiwan and China.

“It’s really so touching! I was totally merged into it.” Mr. Lin said in excitement after watching Shen Yun.

“The synchronization of the dances and the (animated digital) backdrops was so wonderful. It’s very unique,” he added.

Deeply moved by the program The Steadfast Lotus, Mr. Lin said, “I was so moved that my whole body was shaking.”

Seeing the scenes depicting the current day persecution of Falun Dafa practitioners in China, made him very sad. However, when seeing the practitioners remain steadfast in their belief and ultimately win the mercy from gods descending to the human world, he was touched deeply.

Falun Dafa is a spiritual practice, holding to the beliefs of truthfulness, compassion, and tolerance, that is persecuted in China.

He stressed that, after watching Shen Yun, he had a better understanding of choosing between “good and evil.”

He expressed that he could also feel a powerful spiritual energy from Shen Yun’s artists.