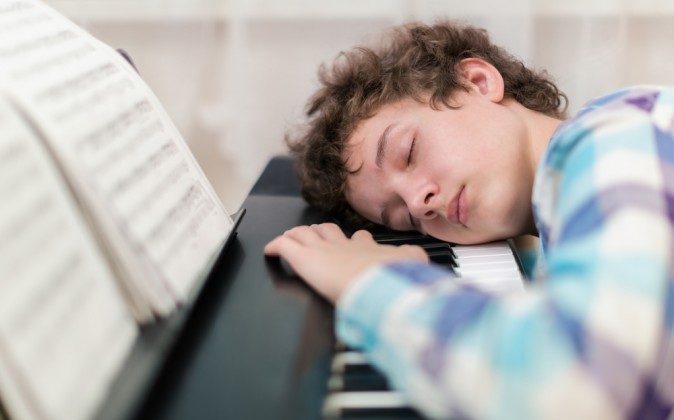 Learning to Play the Piano? Sleep on It!

According to researchers at the University of Montreal, the regions of the brain below the cortex play an important role as we train our bodies’ movements and, critically, they interact more effectively after a night of sleep. While researchers knew that sleep helped us the learn sequences of movements (motor learning), it was not known why. “The subcortical regions are important in information consolidation, especially information linked to a motor memory trace. When consolidation level is measured after a period of sleep, the brain network of these areas functions with greater synchrony, that is, we observe that communication between the various regions of this network is better optimized. The opposite is true when there has been no period of sleep,” said Karen Debas, neuropsychologist at the University of Montreal and leader author of the study. A network refers to multiple brain areas that are activated simultaneously.

To achieve these results, the researchers, led by Dr. Julien Doyon, Scientific Director of the Functional Neuroimaging Unit of the Institut universitaire de gériatrie de Montréal Research Centre, taught a group of subjects a new sequence of piano-type finger movements on a box. The brains of the subjects were observed using functional magnetic resonance imaging during their performance of the task before and after a period of sleep. Meanwhile, the same test was performed by a control group at the beginning and end of the day, without a period of sleep.

The researchers had already shown that the putamen, a central part of the brain, was more active in subjects who had slept. Furthermore, they had observed improved performance of the task after a night of sleep and not the simple passage of daytime. Using a brain connectivity analysis technique, which identifies brain networks and measures their integration levels, they found that one network emerged from the others—the cortico-striatal network—composed of cortical and subcortical areas, including the putaman and associated cortical regions. “After a night of sleep, we found that this network was more integrated than the others, that is, interaction among these regions was greater when consolidation had occurred. A night of sleep seems to provide active protection of this network, which the passage of daytime does not provide. Moreover, only a night of sleep results in better performance of the task,” Debas said.

These results provide insight into the role of sleep in learning motor skills requiring new movement sequences and reveal, for the first time, greater interaction within the cortico-striatal system after a consolidation phase following sleep. “Our findings open the door to other research opportunities, which could lead us to better understand the mechanisms that take place during sleep and ensure better interaction between key regions of the brain. Indeed, several other studies in my laboratory are examining the role of sleep spindles—brief physiological events during non-rapid eye movement sleep—in the process of motor memory trace consolidation,” Doyon said. “Ultimately, we believe that we will better be able to explain and act on memory difficulties presented by certain clinical populations who have sleeping problems and help patients who are relearning motor sequences in rehabilitation centres,” Debas said.