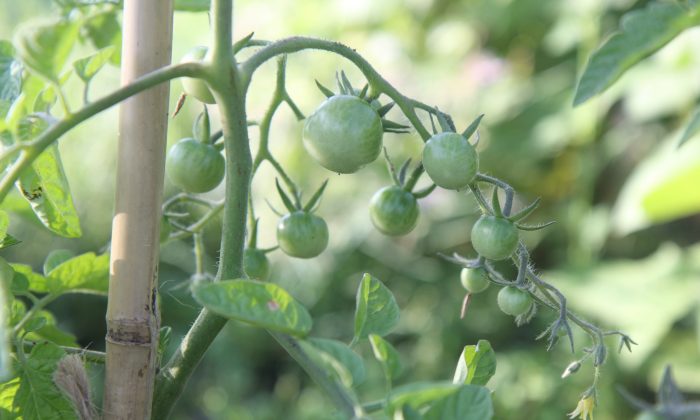 Learning as I Grow

BECKENHAM, England—The runner beans are running amok; laden with red flowers, they weave their way skyward up poles as their lower runners reach out to the green tomatoes that are fattening up, ready to ripen. Spears of corn are beginning to form, standing tall beside their favorite companion, the pepper, which continues to bloom in concert with its tiny fruits.

A welcome cluster of red and pink poppies have popped up between the sprouting broccoli, cabbage, kale, onions, and shallots, presenting a lovely burst of color among those crops I intended to grow.

All this and more I grow on a small plot at my local allotment, a piece of land divided into smaller allotment plots. Allotments can be traced back to Anglo-Saxon times, but the allotments we see in England today began in the 19th century when they were made available to the working poor in order to supplement their diets. Now, anyone can rent a plot for a nominal fee from a private or public landlord.

A plot is traditionally measured using old Anglo-Saxon measurements: rods, poles, or perches, with the average plot being 10 poles. That’s about half a basketball court, according to The National Allotment Society website.

My local allotment has around 100 plots that are rented to gardeners from all different walks of life: diplomats, doctors, builders, recent retirees, young families, professionals, and more.

Beyond the obvious delights of harvesting homegrown produce and being outdoors, I have discovered a surprising side effect of gardening.

Often when I kneel on the soil to sow seeds, pull weeds, or harvest vegetables, something magical happens. Little home truths spring to my mind, and suddenly I see personal growth opportunities where once I saw struggles. Gardening, it seems, is allowing me to grow.

Here are a couple of those insights.

As every good gardener knows, in order for produce to grow well, weeds need to go.

Surprisingly, I’ve learned a lot about life through weeding. I discovered that not all weeds are equal. Some weeds need little encouragement as I pull them up, their shallow roots needing just a gentle tug. Whereas other weeds are more steadfast. Sometimes I pull up tufts of weeds, and the roots remain firmly in the ground. When this happens and I’m short on time, I’m often tempted to leave those roots in the ground; after all, on the surface, it appears the weed is gone. But obviously, that weed can still grow from that root, and by dealing with only half the problem, I’ve just delayed its reappearance.

I also noticed that on my vegetable plot, the same type of weeds come up time and time again. Until I’ve removed every little fragment of the plant and its seeds, these weeds will continue to grow. The same analogy can be applied to my negative thoughts. I have foibles particular to me that are harder for me to work through, just as you have yours.

Now, I’m trying to recognize any unhelpful thoughts and reject them. I don’t examine the thought: I recognize it and then reject it, just as I would with a weed. Now, when a negative thought pops into my mind, instead of weaponizing it to self-deprecate, I’d like to thank the weedy thought for helping me to govern and cultivate myself.

Let Nature Take Its Course, but Not Your Bagel

I also realized that in the garden, everything has a purpose and seems to work in harmony. For instance, when some of my broad beans were covered with black flies, it looked like all was lost, but a closer look revealed that a small colony of ants, some of which had been biting me, were keeping the black flies under control.

This tiny fly and ant battleground was just one thing I witnessed. Who knows what other interactions are going on at more-microscopic levels, moment by moment?

From that black fly experience, I now make sure I grow enough of each crop so that I have plenty of produce, even if one or two plants are attacked. For plants I intend to harvest, I remove pests by hand or put measures in place, like a crushed-eggshell barrier to prevent a slug or snail attack.

The insect encounter taught me not to make assumptions and to be patient. What appeared to be a deadly situation for the broad beans actually wasn’t. Nature just needed a little more time to call in the ant troops.

Honestly, I really don’t mind sharing my harvest with the animals. Allowing a caterpillar or a snail to take a few bites tells me that the food is good and organic.

I do, however, have my limits.

One day while tending the plot, out of the corner of my eye I saw something boldly rummaging through my bag and run off with my bagel. Before I knew it, I was taking up the chase. I never knew I could sprint like that. Then all of a sudden, my mind caught up with what I was doing. I stopped. The fox stopped. We both stared at each other in disbelief: my bagel hanging out of the fox’s mouth, hearty laughter coming out of mine. It was a “Grizzly Adams” moment if I ever I saw one. I had to let it go.

The bagel thief reminded me that even though I think something belongs to me, fate can snatch it away at any moment.

Both the insects and the bagel thief taught me that when making plans in life, whether life-changing plans or for small-scale vegetable plots, we can factor in all the risks, but we can never plan for the unexpected. Perhaps the best thing to do is to live lightly, laugh more, and grow more veggies!