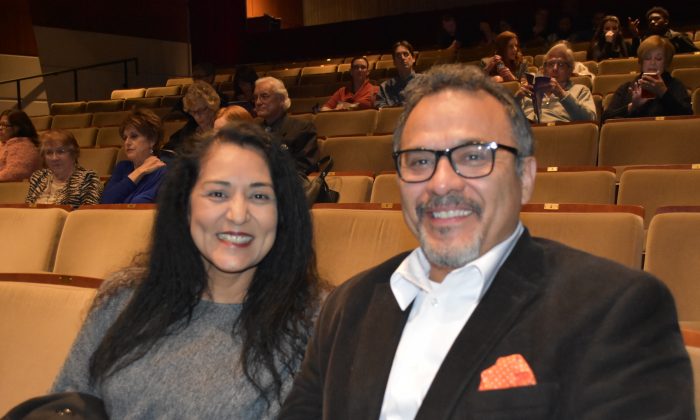 RICHARDSON, Texas—As soon as the curtain lifted, law firm owner Ruben Medrano and his wife, Christina, were instantly taken far away from their everyday lives into a heavenly realm where divine beings in flowing dresses reside. From there, their journey into China’s semi-divine culture began. They visited different regions, dynasties, and major historical events before making their way to the present day for the grand finale.

By returning to Richardson, Shen Yun Performing Arts gave audience members another glimpse into Chinese history with their brand new performance at the Eisemann Center for the Performing Arts, on Jan. 4. This was where the Medranos experienced their first taste of this cultural event, after deciding to purchase tickets at Christmas.

“I was smiling the whole time,” Medrano said. His grin did not dissipate even during intermission.

“Just enjoying the flood of colors and the movement across the stage and the gracefulness of the dancers,” he said.

Christina echoed her husband, agreeing as he described parts of the performance that captured his heart. She said, “it just put me in a really good mood.”

New York-based Shen Yun is once again touching the hearts of thousands of theater-goers around the globe, with six equal-sized companies set to perform in over 100 cities. The performance is made of about 20 individual pieces, featuring Chinese classical dance as a foundation. This style of dancing has a history of thousands of years and was passed down continuously within the imperial palace and ancient Chinese theater and opera.

Classical Chinese dance is grounded in China’s divinely inspired culture and can bring out a dancer’s intrinsic thoughts and feelings. The dancing is accompanied by a live orchestra that blends Chinese and Western instruments, rendering a unique sound. This style of dancing is rich with expressive power and audience members say they can easily experience the energy of the dancers.

This expressive power makes classical Chinese dance a suitable form to tell stories. Shen Yun features many mini-drama pieces that draw upon China’s myths and legends as well as historical records. A unique feature of Chinese civilization is that its history has been documented and passed down uninterrupted for 5,000 years, according to the company. These stories were one aspect of the performance that stood out for Christina.

Along with dance, Shen Yun performances also feature solo vocalists who perform using the bel canto technique—which is an even more challenging feat when sung in Chinese.

The lyrics of these songs are brimming with philosophical reflection about human life and containing deep layers of meaning. Medrano said he was impressed by what he heard, and felt the words helped people reflect about themselves.

“He was singing in his native language, but the words were just meaningful because it applies to us now, to people now. And his voice was just great,” the attorney said.

“I think it’s universal in all cultures that you have a god, and a purpose to your life, and a way of life. And I think that’s what this is all about: it’s a way of life,” he added.

With reporting by Amy Hu and Janita Kan