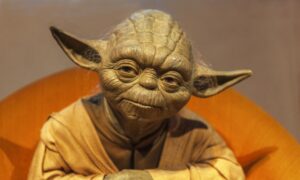 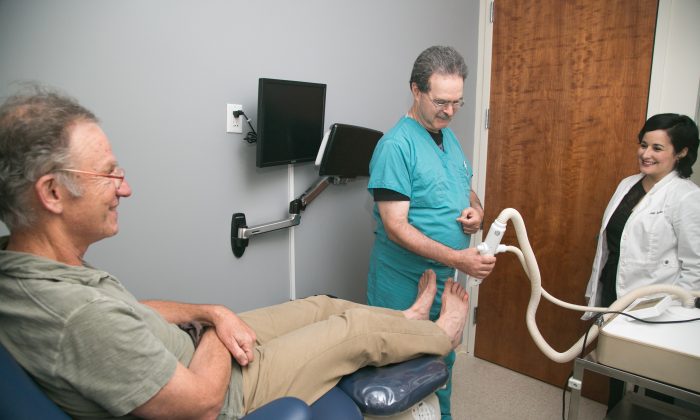 Laser treatment is a remarkable technology that is only getting better. In podiatry, lasers are being used to completely get rid of toenail fungus, eliminate chronic foot pain, and even assist with weight loss.

The latest generation of lasers used for ugly and embarrassing fungal toenails have dramatically improved treatment. Not only is the procedure safe and quick—usually only requiring three 30-minute outpatient visits—it’s also extremely effective.

Podiatrist Dr. Jeffrey Adler, who has been using lasers to get rid of fungal nails for over 20 years, said that the Noveon NaiLaser he uses now is 90 percent more effective than the old carbon dioxide lasers that vaporized tissues while releasing noxious fumes and causing patients considerable discomfort.

The Noveon emits light instead of heat at wavelengths that lethally disrupt the DNA of fungus. The light doesn’t hurt human tissue, so patients feel no pain whatsoever. No side effects have been reported, and there is minimal to no recovery time, said Dr. Adler, who is the medical director of Adler Footcare.

A few years ago, he did a study on the Noveon and found that about 90 percent of toenail fungus clears up with only one round of treatment.

Dr. Adler advises sufferers that even if thick, yellow, infected nails don’t make you self-conscious or cause any pain, it’s still important to treat fungal infections; otherwise, they can eventually enter the bloodstream.

Most people start seeing clear results as soon as the new nail begins to grow out. As an added bonus, they also have peace of mind by having nails that look nice again.

A star among podiatric lasers is the Multiwave Locked System (MLS) laser. Dr. Adler said that if he could have only one piece of physical therapy equipment, it would be the MLS.

“[It’s] able to turn off pain that has bedeviled patients for years, with usually two visits.”

He highly recommends it for patients who have any kind of swelling prior to a foot operation, and he gives free treatments to all patients after surgery to reduce swelling and the chance of infection.

Treatment with the MLS laser takes around 15 minutes and is absolutely painless, Dr. Adler said. The laser has preprogrammed settings with different frequencies and wavelengths and can emit either continuous or pulsing waves that specifically target different conditions.

The MLS is a low-level laser. This type of laser induces healing by using light to create chemical changes in cells.

The beam from low-level lasers stops nitric oxide from displacing oxygen in cells, a process that starts to happen when cells are stressed from disease, trauma, or regular aging. The displacement process ultimately leads to inflammation.

The MLS laser also decreases inflammation and swelling, and can reduce scarring. Dr. Adler uses it to treat everything from open wounds and arthritis to tendon pain and pain in the arch of the foot.

It might seem odd for a podiatry office to have a weight-loss laser, but Dr. Adler says that losing 5 or 10 pounds before a foot procedure improves healing time afterward because the foot has that much less weight to bear.

Earlier this year, Dr. Adler bought the Strawberry laser, which he said helps most women drop a couple of dress sizes, and he can personally attest that it works.

A couple weeks before giving a lecture in New Orleans in June, he found that the suit pants he bought in the fall would no longer button up. After three sessions with the Strawberry, they were easy to button. “They fit and weren’t tight,” he said.

The Strawberry is also a low-level laser. It works by puncturing fat cells so they spill their contents, which are then excreted through the urine.

Sessions with the Strawberry last around 30 minutes total and should be followed up with lots of water and either a jog or session on a whole body vibration machine to stimulate the excretion of fat and fluids.

Dr. Adler says eights sessions are optimal for most people. “It makes healing from any type of procedure that we do much easier.” And the results can be lasting if people follow them up with diet and exercise, he said.

Before he got the Noveon, Dr. Adler got the LightPod Neo, which he found was not so effective for nail fungus, but was good for photofacials: treating skin discolorations, minor varicose veins, stretch marks, and scars—and removing tattoos.

He now has a registered nurse on staff who specializes in these procedures.

There are virtually no side effects with laser treatments, Dr. Adler said, but the big downside is cost, as most insurance won’t cover laser procedures.

Adler Footcare uses creative solutions to make it possible for people to get the care they need. For example, the office accepts medical credit cards like CareCredit and SwipeMed, which give patients 6 to 18 months of interest-free credit. This way patients don’t have to pay all costs upfront.

“We try to be like the Hard Rock Cafe of medicine: love all, treat all. We’ve never allowed money to stop us from treating people,” he said.