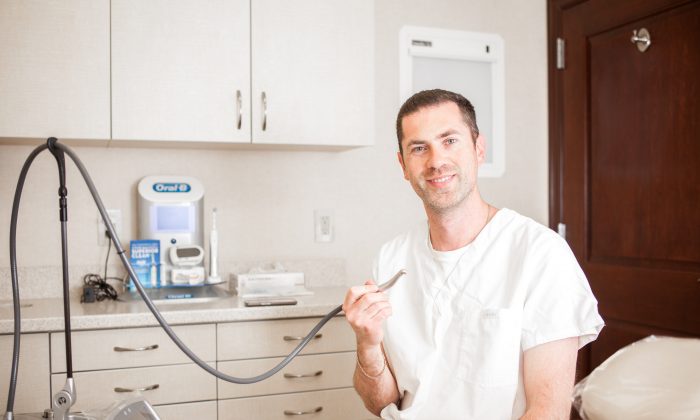 “It’s not necessary,” he said.

Sometimes patients take over-the-counter pain pills for a couple days, but “that’s about it.”

A periodontist and pioneer in laser dentistry, Dr. Schlesinger says lasers have hugely improved gum disease treatment. Laser treatments are also much less traumatic for the body, allowing it to heal much faster.

With advanced gum (or periodontal) disease, plaque and bacteria accumulate deep under the gum line and cause the jawbone to deteriorate.

According to a study by the Centers for Disease Control and Prevention (CDC), nearly half of Americans over 30 have periodontal disease, but despite its prevalence, Dr. Schlesinger said, it’s often not diagnosed and many times goes untreated.

Dr. Schlesinger recommends seeing a specialist for a diagnosis, which you can do without a referral.

“Make sure you get checked, and if you need treatment, ask about using a laser,” he said.

Why Lasers Are Better

Treatments for advanced gum disease remove pathogenic bacteria from under the gum line. In some cases, a bone graft is recommended to regrow deteriorated bone.

Traditional treatments start with a deep cleaning of the gums using ultrasonic or manual instruments. If the dentist finds pockets of bacteria that are too deep, surgery is needed to cut back the gums and clean them out. This surgery requires anesthesia, stitches, sometimes antibiotics, and about two weeks for full recovery.

Laser treatments are a lot more effective because the bendable fiber-optic tips can get into “little nooks and crannies where it’s very difficult to reach with traditional instruments,” and the surgeon can get the same results without having to cut the gums, Dr. Schlesinger said.

“When you use a blade to cut away tissue, you’re going to indiscriminately also remove healthy tissue during the process. But the laser allows us to be much more precise,” he said.

And unlike traditional equipment, lasers have the unique ability to vaporize diseased tissue and leave healthy tissue intact.

“That’s because of the physics; it vaporizes away water, and diseased tissue has a higher water content than healthy tissue,” he explained.

Lasers beams also kill bacteria on contact and cauterize blood vessels, so there is less bleeding and the surgeon can see what’s going on without having to peel the gums back so far.

Surgery with lasers can be done with a lot less or no anesthesia, although Dr. Schlesinger prefers using the normal amount because sometimes teeth can be sensitive. Stitches are only needed in very severe cases, and patients can go back to work the same day as the procedure.

Dr. Schlesinger has been using lasers since 2007 and now has two, one in his Midtown East office and the other in his Long Island office. He uses the Waterlase YSGG for gum surgery and any procedure that’s normally done with a scalpel or drill. His hygienists use a less powerful diode laser to supplement routine cleanings.

And although the lasers look a lot like a drill, they sound and feel very different. For patients who cringe at the high-pitched whir of the dental drill, the purr of the laser motor makes for a less stressful experience.

And lasers don’t vibrate the mouth like drills do. “Since there is no contact of the fiber optics with tissue, there is no vibration or pressure when bone or tooth needs to be cut,” Dr. Schlesinger said.

So Good, but Still So Few

Lasers are not new in dentistry; hard tissue lasers have been approved by the FDA for almost 20 years and soft tissue lasers even longer. But despite their advantages, they are still not yet mainstream.

This is partly because of the cost of the equipment—dentists need to spend tens of thousands of dollars for a good laser—and also because it’s not easy for dentists to be trained to use them, Dr. Schlesinger said.

Laser treatments don’t cost patients any more than having procedures done more conventionally, however, since fees are based on what is done, not how it is done.

Currently there are very limited courses available for dentists to learn how to use the Waterlase for periodontal treatment in the Northeastern United States, and dentists may have to travel as far as Florida or even California to learn to use it.

Dr. Schlesinger, who has been certified by BIOLASE Inc. (the company that makes the Waterlase) to teach other dentists how to use it, is now working with a colleague to create a training course in New York.

He hopes more accessible trainings will make laser dentistry the standard of care and ultimately reduce the “big fear factor” that arises when patients contemplate gum surgery—making them more likely to seek treatment.