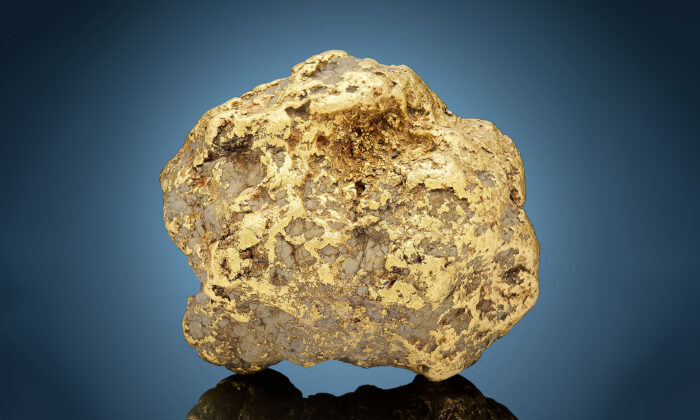 The largest gold nugget ever found in Alaska is set to be auctioned in Texas in December and is expected to fetch over $700,000.

In the summer of 1896, over 100,000 prospectors descended upon northwestern Canada after gold was found near the Klondike River. About 100 years later, in 1998, a prospector named Barry Clay—so the story goes—was moving dirt with his bulldozer along the shores of Swift Creek Mine when he unearthed a giant gold nugget larger than a softball.

Clay was said to have buried the precious metal nugget beside a tree while considering what to do with it before toting it into town, and eventually selling it to a consigner directly.

Today, that chunk of gold is known as the Centennial Nugget. Weighing a colossal 20 pounds, it is the largest gold nugget ever discovered in Alaska, according to Heritage Auctions, and the second largest found in the Western Hemisphere after the Cortez Nugget, which was found in Mexico.

“It is such a piece of historical significance,” said Craig Kissick, director of nature and science at Heritage Auctions. “The sheer fact that it is the seminal largest ever found in the state of Alaska—what else can you say, you run out of superlatives.

On Dec. 8, the historic nugget is set to be auctioned by Heritage Auctions in Dallas, along with a host of other elite gold specimens, including several crystallized gold pieces and rare, notable nuggets.

“A rare group of gold specimens such as this has never been featured at auction,” Kissick said. “A grouping of this breadth and caliber is not likely to be seen again.”

Gold found in nugget form is rarer than gold melted down; hence aesthetic collector pieces such as these are a value multiplier, there being fewer than 50 gold nuggets weighing over 250 ounces in existence, according to Kissick. But the historic significance of the Centennial is unrivalled.

“The majority of gold mined is refined,” Kissick added. “A one-ounce gold nugget is even more rare than a five-carat diamond.”

Among the other truly magnificent and “magical” specimens on auction is a piece of crystallized gold from the famed Eagle’s Nest Mine in California—a gorgeous leafy example which resembles “a frozen geyser of gold” and is expected to fetch $200,000 or more.

“The structure or atomic arrangement of gold crystals of this size has never been studied before,” said Miami University mineralogist John Rakovan, “and we have a unique opportunity to do so.”

Another crystallized gold leaf piece featured at the auction displays “a delicate form of visually striking crystals,” and once belonged to legendary Mexican mineral collector Dr. Miguel Romero. It’s estimated worth is $150,000 or more.

Numerous other high-caliber gold pieces will also be featured at the auction.