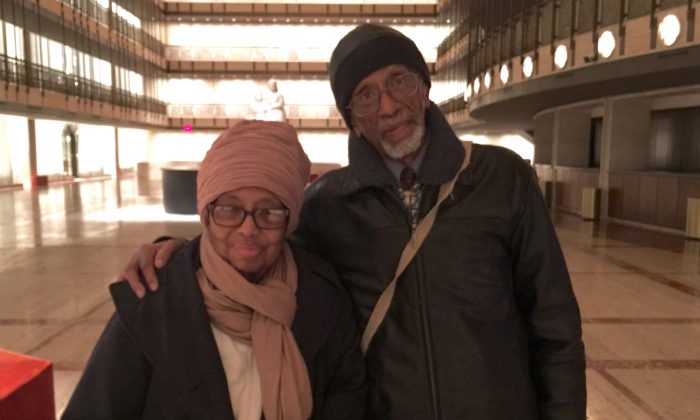 Mr. Wickham was stationed in South Korea during the Korean War in the 1950s. He saw the horrors of war, devastation of land and life, and what it is like when people act without compassion.

But years later, when he and a friend returned to Asia and experienced a beautiful festival of cherry blossoms in Japan, Mr. Wickham saw the revival of a vibrant traditional culture with the music, colors, and decor of the culture; he felt peace, love, joy, and faith—a sort of healing.

“Everything was bright as sunshine,” Mr. Wickham said at Lincoln Center on the evening of Jan. 13. He saw the performance with his wife Celia, who bought tickets as a birthday gift.

Formed in 2006, Shen Yun artists came from around the world to revive traditional Chinese culture, according to the program. The culture was once nearly lost when communism took power in China, and the Chinese Communist Party sought to destroy traditional culture.

It is a divinely inspired culture that holds principles like wisdom and propriety, benevolence, and respect for the heavens. It is a culture that lives on today through authentic classical Chinese dance and the music of Shen Yun’s unique orchestra that features both Eastern and Western instruments.

Mr. Wickham said Shen Yun was positive, and that he liked seeing something “fresh and clean.”

He has seen the world change a great deal, but what the people need remains the same: peace, love, and faith. All these things he saw in Shen Yun.

Mr. Wickham was celebrating his 82nd birthday with the performance, but the impact of the renewed culture had him feeling like he was 28 again.

“That’s what this world needs,” he said.