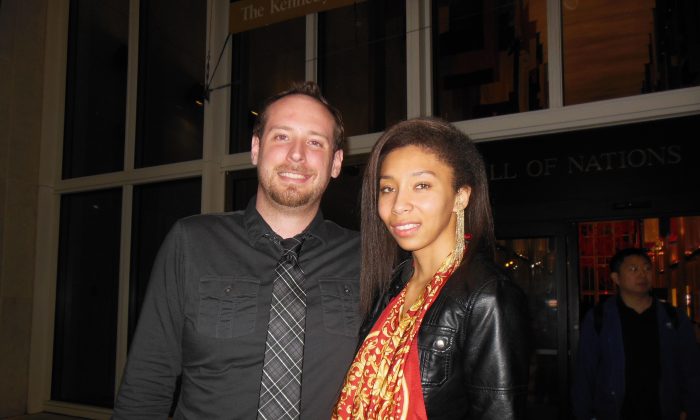 Paul Miller and Jeroline Jackson were especially impressed with the music in Shen Yun when they saw the performance at Kennedy Center Opera House, April 17, 2015. (The Epoch Times)
City

WASHINGTON, D.C.—The appreciation was palpable in the hearty applause that broke out at the Kennedy Center Opera House after different acts by Shen Yun Performing Arts during the company’s 2015 debut performance, April 17.

New York-based Shen Yun is a classical Chinese dance company on a mission to revive China’s traditional culture though the performing arts. D.C. is one stop in their global tour that includes over 100 cities.

Shen Yun’s all-original music was a highlight for many in the audience.

For Sharon Franks-Dunbar, a traffic control officer, the message of hope in the lyrics of the bel-canto solos had a special poignancy.

“The songs were lovely. They made me cry,” she said, explaining that it was her second time to see Shen Yun, and she decided to come again to honor the birthday of her mother who recently passed away.

“In the [first] song they said the Creator comes to take you back to heaven. And that meant so much to me that my mother has gone to Heaven to be with the Creator.”

Paul Miller, a web development instructor at the educational institution General Assembly, said that he was so captivated by the music that the two hour performance seemed like only 30 minutes.

He and his girlfriend especially enjoyed the musical solo performed on a traditional two-stringed instrument called the erhu.

“That sent tingles up and down my spine. I can’t form into words the kind of feelings it put me through,” he said.

“It took me out of being inside of a theater filled with people and being in tight clothes, being very uncomfortable—to being outside … focused on that two to three minute solo.”

“The piano beautifully balanced the parts and times where the erhu was playing,” said his girlfriend Jeroline Jackson, a professional model, intern at the Asian-American Chamber of Commerce, and amateur classical pianist.

“They fed of each other’s energy,” she said, adding later that the performance gave her “sense of euphoria.”

Mr. Miller said the performance went beyond his expectations and that he was “absolutely entranced by everything I heard and saw.”

A Journey Through Higher Realms

Beyond perfecting traditional dance and music techniques, Shen Yun artists seek to give audiences a taste from the deep well of spirituality that for millennia was the basic sustenance of Chinese culture.

“[The music] takes you on a journey, on a spiritual journey,” said Rashanda Dunn, who directs a swimming program, adding that the performance stirred a lot of emotion in her.

“It’s so emotional. I feel so connected, … it just comes across, it really does, and that spirituality that [they’re] trying to portray and feel, I feel that,” she said.

Sunil Chaudhary, originally from India, said during intermission, that he could relate with the spirituality in Shen Yun, especially compassion.

“It’s definitely impressive [in terms of] the spirituality … It’s a delight to watch,” he said.

His wife, Ritu Chaudhary, said it is something you need to experience. “You have to see and feel it,” she said.