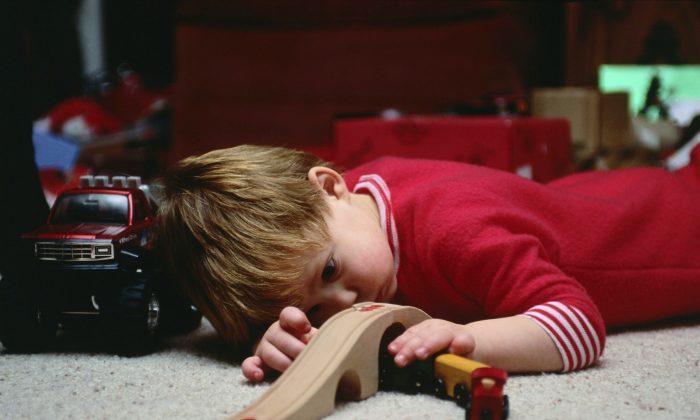 A young boy plays quietly and intently with his wooden train set. When choosing gifts for children this holiday season, consider toys that are fun as well as spark children’s creativity, and be vigilant about product safety. (Ablestock.com/Photos.com)
Alternative Health

Smiles cross the faces of so many children at this time of year. Christmas makes them giddy with anticipation and joy when Santa fills their wish lists on Dec. 25.

Parents, however, may want to consult with Santa about what’s on those lists and which of the requested gifts may actually be harmful.

The U.S. Public Interest Research Group (USPIRG), a non-profit organization that advocates for consumer safety, releases an annual list of dangerous toys as well as research findings about health hazards that can be posed by some items that may very well wind up beneath a tree this year.

While several of the toys that researchers have deemed “dangerous” present choking hazards and potentially poisonous reactions if swallowed, some are products that could pose damage to a child’s ears.

In the 2012 study, the most dangerous “noisy toys” were a guitar and a console game that featured a car steering wheel. Those toys exceeded 85 decibels (dB) for prolonged periods, a level great enough to cause hearing damage.

As adults, the need to be vigilant about the dangers of excessive noise has never been more important. The exposure to loud noise is showing harmful effects to children.

A U.S. National Health and Nutrition Examination Survey revealed that one in five children in America will incur “some degree of hearing loss” before age 12, confirming the trend documented in other studies that hearing loss is being found in people at a younger and younger age.

With console games becoming increasingly popular and with action films and TV shows pushing the limits of what we can listen to comfortably, children are exposed to more noise than ever.

• If a toy seems too loud for you, then it is probably too loud for your child.
• For loud toys you already own, put tape over the speakers or remove the batteries.
• Report a loud toy to the Consumer Product Safety Commission website: www.saferproducts.gov

As North American society becomes intensely urbanized, children’s ears are inundated with constant sound, much of it aggravating to their auditory systems. Whether it be traffic noise or sound coming from a computer monitor, kids are dealing with loudness in a way humans have never had to cope with before.

Parents, toy manufacturers, and the government all have to play a role in reducing the stress on kids’ ears. The U.S. Consumer Product Safety Commission has established standards for noise levels in toys. Those standards state the following, when measured from 25 centimetres:

In the past, researchers have found toys measuring in excess of 120 dB in the marketplace.

What’s a parent to do?

The best advice is perhaps to make it a point to become more serious about kids’ hearing health.

We wouldn’t allow our kids who might be prone to sunburn to go outside without sunscreen. Neither would we allow a cavity or dental ailment to go untreated, or blurry vision to go unchecked. Yet, when it comes to hearing health, we rarely account for the exposure to excessive noise.

As the USPIRG report on dangerous toys shows, we can become unwitting participants in the decline of our kids’ hearing health. Shopping for toys too often comes down to making decisions based on marketing and packaging, rather than safety.

These days, with complicated, high-tech toys all over the shelves, it’s too much for many parents to go through the myriad potential dangers in any given item.

Perhaps one thing to keep in mind, when thinking about presents this holiday season, is to consider what’s really important in a child’s gift.

It’s not bells and whistles, it’s the ability to use imagination and have fun. Crayon kits, sensibly designed puzzles, and sports equipment that gets them outside are among the products that traditionally spark children’s creativity.

It might seem like a “bah-humbug” thought to criticize toys at Christmas time, but the reality is we need to advocate more for our children’s hearing health. This holiday season, let’s make sure Santa’s “naughty and nice” list takes “noisy” into consideration too.