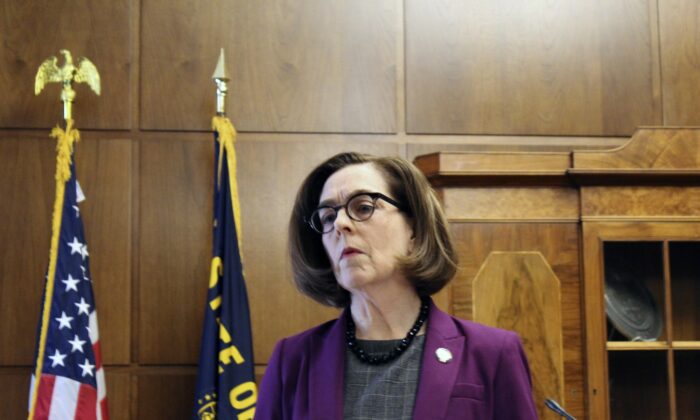 Brown recently issued an order to mandate vaccines for the state’s executive branch workers, including state troopers. Hundreds of thousands of healthcare staff and public school employees also have to receive the vaccine under her mandate, although her orders allow for medical and religious exemptions.

Dan Thenell, an attorney representing the plaintiffs, told The Oregonian newspaper “each of the plaintiffs are assessing their options for moving forward.”

Meanwhile, Portland-based Nike said it will mandate vaccines for all office-based workers. All employees who are coming back to the office have to receive the shot, the firm confirmed in a statement this week.

Last month, a statewide civil rights coalition announced it filed a lawsuit against the state of Oregon and the Oregon Health Authority over the mandate.

“None of our Plaintiffs have been given the option by their employers to decline vaccination,” Ben Edtl, the CEO of Free Oregon, Inc., told KTVL. “Many of them have been denied exemptions, like in Molly’s case,” referring to one of the plaintiffs, medical receptionist Molly Valdez.

Valdez told the news outlet that because she already contracted COVID-19 earlier this year, she was hesitant to get the vaccine.

“As the higher-ups [at her workplace] started releasing things saying that we needed to follow the vaccine mandate, I said oh wait, there’s a portion that says medical exemption, and I knew my doctor would be more than happy to grant me the medical exemption knowing my medical history, my family’s medical history, I have been seeing him since I was 11 years old, he knows me really well,” Valdez said, adding that she is a Type 1 diabetic.

But Valdez said that after her doctor granted her a medical exemption from the vaccine, Valdez’s employer told her that having COVID-19 and being a Type 1 diabetic is not a valid reason for exemption.

The mandates come about a month after President Joe Biden announced sweeping vaccination mandates for all healthcare staff who work at facilities receiving Medicare or Medicaid funding, federal employees, and federal contractors. Also announced was a potential mandate that would force private businesses with 100 or more employees to require their workers to get vaccinated or submit to weekly COVID-19 testing.

In comments in Illinois on Thursday, Biden defended his plan and downplayed reports of “mass firings.”