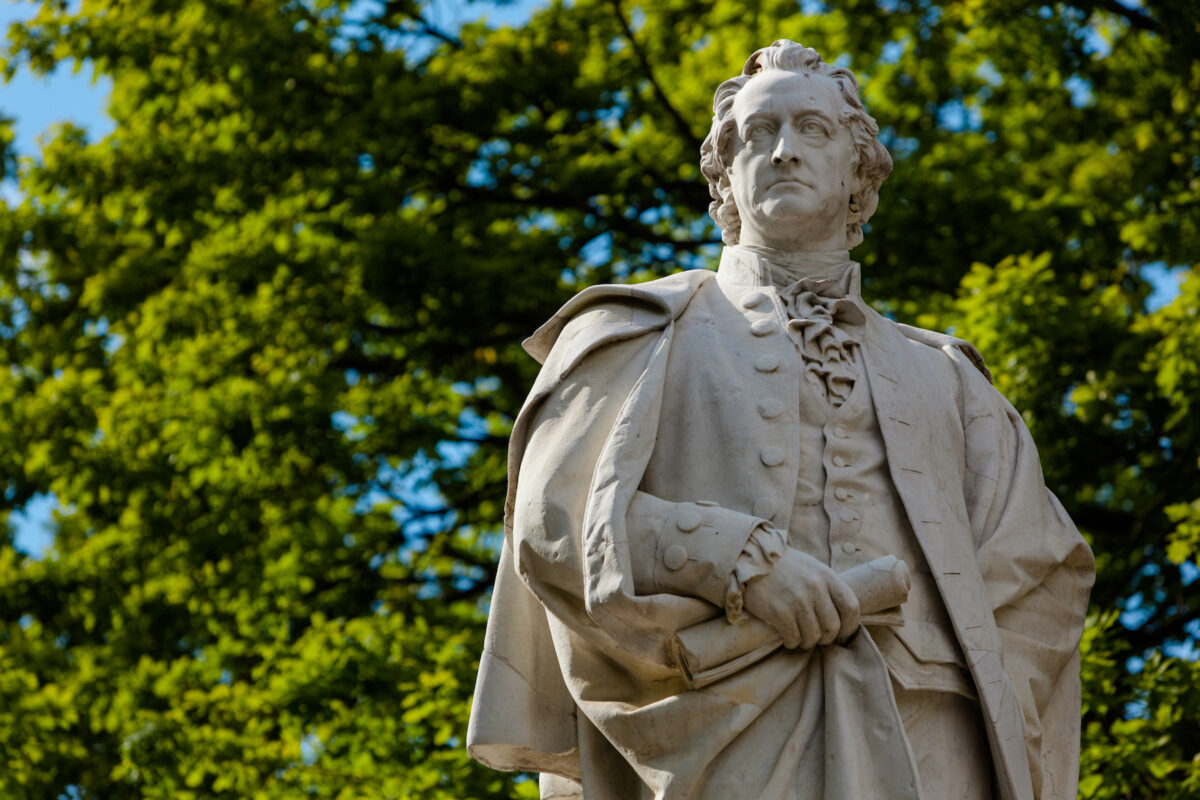 Johann Wolfgang von Goethe is often called “the German Shakespeare,” though in many ways he was more of a Leonardo. In addition to writing literary masterpieces in every genre, he made scientific contributions to the fields of geology, anatomy, optics, and botany. He was also a painter, diplomat, and government administrator who never wanted for love or friendship. How could one human being achieve so many blessings? The short answer: Charisma helps. But the longer answer involves, surprisingly, art.

Goethe was born in 1749. His prominent family’s coat of arms was the lyre, symbol of wisdom and the arts. His father appointed private tutors to teach him literature, languages, painting, music, and science, as well as riding and fencing. As a boy, Goethe composed poems and plays. His first novel, “The Sorrows of Young Werther,” brought him international success in his 20s. Following this, the Duke of Weimar invited him to court. They got along so well that Goethe soon found himself managing the duke’s practical affairs. Though he enjoyed applying his talents, Goethe’s artistic output waned.

Feeling overwhelmed by his responsibilities, he absconded to Italy for two years in 1786. He clamored over Roman ruins and saw famous works of Renaissance art, keeping a diary that he would draw on to write his “Italian Journey,” an early travelogue. He was so inspired by his travels, he wrote the duke, that he promised to return a changed man.

Throughout his life, Goethe scribbled down his passing thoughts on scraps of paper. He incorporated them into his various novels, poems, plays, and scientific writings, but also amassed them separately into a collection of “Maxims and Reflections,” published the year after his death. Among these disparate thoughts, some illuminate his struggle to balance literary endeavors with administrative duties.

Maxim 32 states: “There is no way of more surely avoiding the world than by art, and it is by art that you form the surest link with it.”

Too many artists, he felt, made themselves unsuited for the active life. But as Rüdiger Safranski observes in “Goethe: Life as a Work of Art,” the German poet would seek to give his individuality an original form by applying the aesthetic sphere to the practical one.

Toward the end of “Maxims and Reflections,” we encounter this more esoteric statement: “Light and spirit, the one in the physical, the other in the moral realm, are the highest imaginable indivisible energies.” Goethe is referring here to the scientific idea he thought he would be best remembered for. In his “Theory of Colors,” he attacked Isaac Newton by arguing that white light contained a “natural purity” that struggled against darkness. The color spectrum arose, Goethe theorized, from light’s interactions with refracting and shading elements as it fell upon objects. He analyzed the physiology of color perception in a way that was basically correct, even if he was wildly incorrect about light’s essence.

Like a good moralist who struggled with the rigors of empiricism, Goethe applied this optical concept to the ethical realm. In a diary entry dated May 26, 1807, he wrote, “Love and hate, hope and fear are also only different conditions of our murky inner life through which our spirit looks towards the light or towards the shadows.” In Goethe’s own life, he sought natural purity by integrating his perceptions into his various endeavors. He would conscientiously fulfill his administrative duties while making time for literature. His practical insights would give a “refined naturalness” to his writings as the wisdom gleaned from literary reflection informed his life in turn.

In maxim 164, he wrote, “However ordinary life may look, however readily it appears to put up with what is common, everyday, it yet goes on secretly nursing higher demands and looks round for ways of satisfying them.”

While focusing on each task at hand, he would attain the best possible results in each area. He would achieve, in other words, spirit—the moral corollary of light. These years became filled with a hectic activity that almost defies compression into a single life. As the duke’s privy councilor, Goethe oversaw areas ranging from mining to finances, road-building, school administration, irrigation, and military organization. He married his secretary and longtime lover, Christiane Vulpius, and cultivated a great friendship with the poet Friedrich Schiller. Most importantly for posterity, his literary output was massive.

The Poet and the Conqueror

This integration of life and art was put to the test when Goethe met Napoleon Bonaparte. In 1808, The Duke of Weimar brought Goethe on a diplomatic mission to the Congress of Erfurt, a summit where the emperor hoped to strengthen his alliances with European rulers. Weimar had been sacked two years earlier after the Battle of Jena and remained under French control. Napoleon considered dissolving the duchy completely, but had settled for demanding 2 million francs instead—far more than Weimar’s annual income. The duke hoped that the presence of Goethe, the greatest writer of the age, would provide enough cultural authority to loosen the emperor’s iron fist.

Goethe left us an account of his meeting. Napoleon summoned Goethe to his breakfast table on the morning of Oct. 2. After some small talk, he confided that he had read “The Sorrows of Young Werther” seven times, and questioned Goethe about a part of the novel he felt was “unnatural.” Goethe responded that a poet was justified in creating artifices to achieve complex emotional effects. Napoleon then turned to the French theatre and its dramas about fate, which he also felt were unnatural. “What has fate got to do with it?” Napoleon said. “Politics is fate.” The conversation shifted to other topics and personal matters before Goethe was dismissed.

After this, Napoleon was more lenient toward Weimar, probably for the sole reason that Goethe lived there. The emperor also awarded his favorite author the cross of the Legion of Honor. Goethe wore the medal everywhere, to the consternation of his fellow Germans, who accused him of flagging patriotism. Even after Napoleon’s downfall, Goethe always spoke of him with admiration.

Goethe recognized that people in most times and places endure too much misfortune to enjoy “the beauty of the world and the sweetness of existence.” Yet he himself seems an unlikely person to have written his most famous work, “Faust,” the story of an unhappy professor who sells his soul to the devil for the chance to gain a single moment of earthly satisfaction. Goethe had no need to sell his own soul—having every satisfaction, the devil had no bargaining power.

He had a privileged upbringing, but so did his friend and fellow writer Jakob Lenz, who, after a series of personal struggles, committed suicide. The difference between the full life and the empty life ultimately depends on more than luck or—as Napoleon would object—fate. A commitment to overcoming indolence and balancing competing ambitions is still needed. “Natural purity” in the realm of morals (if not optics) comes down to self-control: disciplined moderation and practiced serenity.

Goethe summarized it best: “Do not hurry; do not rest.”

Rüdiger Safranski’s book, “Goethe: Life as a Work of Art,” published by Liveright in 2017.

Andrew Benson Brown
Andrew Benson Brown is a Missouri-based poet, journalist, and writing coach. He is an editor at Bard Owl Publishing and Communications and the author of “Legends of Liberty,” an epic poem about the American Revolution. For more information, visit Apollogist.wordpress.com.
SHARE
Friends Read FreeCopyFacebookTweet
SHARE
Friends Read FreeCopyFacebookTweet
You May Also Like