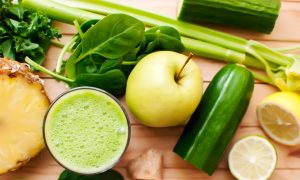 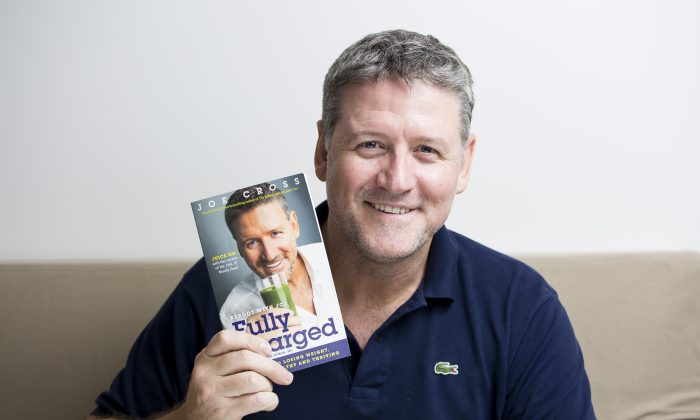 Joe the Juicer Inspires Happiness With a Plant-Based Diet

NEW YORK—Without the inevitable suffering that comes with life, happiness would probably be very difficult to feel. Still, nobody wants to suffer unnecessarily.

“I believe that you are either broken, or you are not,” Joe Cross said at a hotel in New York’s SoHo neighborhood, just a few days after ending his three-month book tour of “Reboot with Joe: Fully Charged.” After making 41 public appearances in 7 countries, he unpacked his suitcases for a two-day stay in New York before he would fly to Greece for a relaxing summer break.

The entrepreneur, filmmaker, and wellness advocate (aka Joe the Juicer) is constantly learning, discovering, and testing out new ideas. He’s been pondering what he calls KIVDI, which stands for “knowing it versus doing it.”

“I’m fascinated by why so many of us know, but we don’t do,” he said with a resonant deep voice and an unmistakable Australian accent.

Most of the 350 people he interviewed during his road trip across the United States while making his first film,”Fat, Sick & Nearly Dead” in 2007, and hundreds more since then, know that eating more fruits and vegetables is good for your health, but they still mostly eat unhealthy processed foods.

“What’s that disconnect? What’s that gap? What’s the bridge? What connects the divide?” he asked himself. “I know that if you practice a few things, then that gap gets smaller, and a bridge can form so that the knowing becomes doing and vice versa,” he said.

He was on autopilot, turning to sugar and processed foods to relieve stress and for comfort.

He points out those bridges in his latest book, like being honest and respecting yourself. “Honesty will set you free,” he wrote.

It’s the mindful decision, for example, of taking the stairs instead of the escalator, or of eating an apple instead of a candy bar. Those day-to-day, hour-to-hour, minute-to-minute decisions add up.

“There’s loving your plants and understanding how to love yourself, there’s dealing with stress and mindfulness, it’s the relationship to food, the understanding of habits, and its being connected and supported by family and friends,” he said.

That’s his understanding now. A couple of decades ago, he was not so kind to himself.

“If you are broken, then you are the only person who can decide that,” Cross continued. At his last book tour appearance on June 20 at The Seed Experience, a vegan expo in Brooklyn, he asked the same question to the audience: “Who here is broken? Raise your hand.”

While doctors or other people can tell you the state of your health, Cross believes innately the answer and the responsibility to do something about it is within you.

In his 30s, Cross suffered from an autoimmune disease, chronic urticaria (hives), for 8 years, taking loads of various medications. When he hit 40 years of age, he took the reins of his own life. Taking a good, long, hard look at himself in the mirror, he saw that he was “Fat, Sick & Nearly Dead,” the title of his award-winning film with over 24 million views so far.

I don’t think there’s a better city in the world that enables you to reinvent yourself than New York.
— Joe Cross

“I knew that I was broken, and I didn’t want to be broken anymore,” Cross said. He had been neglecting taking responsibility for his health in an extreme way, so he felt compelled to come up with an extreme, dramatic solution. His life was on the line.

During the early part of his adulthood, he built a very successful career starting as a bank clerk, then as a trader on the Sydney Futures Exchange, to trading his own account, to investing his own capital, and then to angel investing, running about eight businesses.

Somehow I found a seventh gear that I didn’t even know existed. I was flying, literally!
— Joe Cross

He was on autopilot, turning to sugar and processed foods to relieve stress and for comfort. He was not the only one. About two-thirds of Americans are either overweight or obese, with a high risk of getting heart disease, diabetes, sleep apnea, or depression to name a few, according to the latest figures from the Centers for Disease Control and Prevention.

“I had reached a point where I had to either do something, or not do anything at all,” Cross said. He breaks down his decision making in binary terms, as a self-reflective Socratic method.

“So I took the ‘fat’ and the ‘sick’ part and I broke them apart. I said to myself: These are the two problems. Let’s look at them logically, as to what I can do to reverse those two. Because I’m pretty sure if I can not be fat, and I can not be sick, then I can clear the nearly dead. Right?” he said smiling.

Then he was told the good news by professor Ronald Penny, who appears in his first film, that 70 percent of disease is caused by lifestyle choices. He went down the list: he smoked, drank too much alcohol, ate too many processed foods, didn’t exercise, slept poorly, and had plenty of stress. He was a classic example of how disconnected many of us are from natural foods and what our bodies actually need.

This was a story about my pointing my finger at myself, of me changing, not me changing others.
— Joe Cross

Six months after really looking at himself in the mirror, he decided to go on a juice only fast for 60 days while driving across America, asking people about their eating habits, and sharing his experience. It was a way to keep himself on track and, if it all worked out, he would use the film to inspire others to eat a healthier, plant-based diet.

At 41 he flew from Sydney to New York City where he started his road trip and internal journey, along with a film crew of five to produce “Fat, Sick & Nearly Dead.”

“I don’t think there’s a better city in the world that enables you to reinvent yourself than New York,” Cross said. “I came here to reinvent myself from this person that was not necessarily worried about health or anything else, to now being someone who is conscious.”

The first four days of his fast, he did feel like he was practically dying as his body detoxified, but he stayed committed to what he jokingly called, food and veggie self-imposed prison. After that his sense of smell became more acute, his energy became more focused, he could sleep better.

During the 60 days he lost 100 pounds. His “Fat, Sick & Nearly Dead” film shows him celebrating up in a hot air balloon. He reflected on that moment after eating a green apple:

“I was feeling just the best that I’ve ever felt in my life. I had never felt more at peace, more whole, more calm,” he said comparing it to driving a 6-speed manual transmission car. “Somehow I found a seventh gear that I didn’t even know existed, I was flying, literally!” he said as his face lit up.

After the 60 days, for three months he ate a plant-based diet and was able to stop taking all of his medication. He was surprised at how quickly his body was able to heal, by just giving it the right nutrients—all the micronutrients from plants, like vitamins, minerals, phytochemicals, and so on.

“This was a story about my pointing my finger at myself, of me changing, not me changing others, this was about my journey,” Cross said pointing at his heart. He’s not one to tell others what to do, but leads by example, sharing his experience.

“Fat, Sick & Nearly Dead” went viral. He made a sequel with the same title and the number 2 after it. The response was so positive Cross founded his wellness company, Reboot with Joe, in New York City, creating a community of support with three-quarters of a million  unique visitors to his website per month.

Today, at 49, Cross is 242 pounds and is probably one of the happiest people on the planet. He eats meat occasionally and treats himself to his favorite chocolate ice cream every three weeks or so.

Cross said that he’s always been a generally happy person because he has a sense of purpose in being productive, valuable, and creative. Having suffered from a chronic illness in the past has given him ample contrast to fully appreciate his health in the present. He sees time as a luxury, but said in a couple of decades health could be considered a luxury.

Storytelling and Serving Others

Like taking a big basketful of fruits and vegetables of different sizes, shapes, and colors, and putting them in a juicer to extract the micronutrient water from them, Cross takes complex knowledge from doctors and scientists and makes it easy for others to understand.

His purpose is to send a very transparent and honest message and account of what he’s doing, and “that means talking about what’s working and also about what’s not working … and I appreciate the trust that’s been given to me,” he said.

Cross asked why we are only consuming 1 out of 20 calories from plants? Plants are high in nutrients and low in calories. “There’s a big opportunity here to try to repackage and sell them in a better way, and that’s what I’m trying to do,” he said.

Joe Cross’ next film, “Little Humans,” is currently under production and will be released by the end of this year. It’s about inspiring stories of what children are doing for children when it comes to their nutrition choices.

“This Is New York” is a feature series that delves into the lives of inspiring individuals in New York City. See all our TINYs here:
epochtim.es/TINY

Regard food as fuel, medicine, and something to enjoy, instead of as something to use for comfort or for relieving stress.

Understand the power of different plants. Make well-informed choices of what to eat. Use the rainbow approach of eating vegetables that are red, green, yellow, orange, and purple every day.

3. Change your habits about food (Find your groove)

Changing your nutrition means also changing other habits involving food, including what you buy at the grocery store, how you serve meals to your family, and maybe even the places you hang out during the day.

4. Embrace community (Get a little help from your friends)

Overcome any feelings of worthlessness with the help of others that would induce you to eat unhealthy food. Lady luck follows a person of action. You’ll be surprised by just how responsive the world is when you reach out.

The human body has incredible systems for self-repair. It needs to be maintained with regular exercise and sleep.

The biggest reason why people eat unhealthy foods is stress. Learn how to de-stress.

7. Respect yourself (Stop beating yourself up)

Loving yourself is the foundation for all healthy decisions. Nothing you do to improve your eating habits is going to work or stick or become a regular part of your life if you don’t respect yourself.