Job Satisfaction? Depends on Who You Talk To
0
Share Now
TelegramFacebookTweetEmailTellMeWeReddit
Copy Link 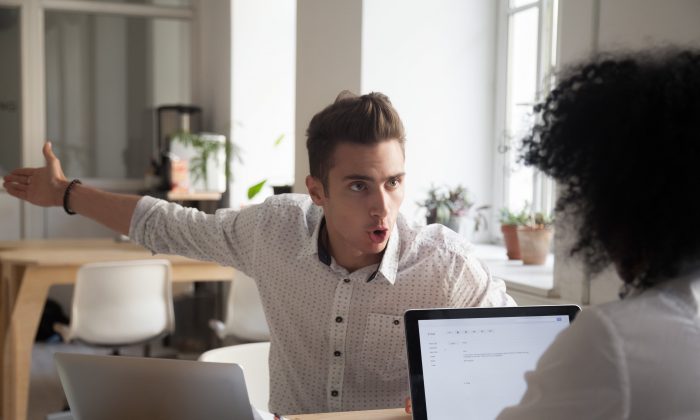 Complaining can feel like a release, but it can leave you focused on the negative aspects of work rather than the positive. fizkes/Shutterstock)
Life & Tradition

Job Dissatisfaction Is an Avoidable Habit

Complaining can become wired in our brain, and changing it can lead to a better worklife
By Jeff Garton
biggersmaller
Print

Like children, employees complain to get what they want. They know the squeaky wheel gets the oil. What they don’t know is that complaining can become habitual.

Employees complain most about what they don’t have and can’t control. This is why they’re never completely satisfied. Getting what they want is dependent on people they don’t control and material things they can’t always have. As a result, complaining about dissatisfactions is inevitable.

The result is people suffer a lot of mental discomfort working in jobs they harbor complaints about, feeding a mentality that can increase stress and resentment.

Even when the option exists to jump ship for greener pastures, unhappy employees often choose to stay in their jobs and complain. A real time example of this is provided by the shortage of job seekers during one of the best job markets in U.S. history.

A recent Harris Interactive survey found that 55 percent of U.S. workers are dissatisfied with some aspect of their work experience. Of this group, 33 percent believe they’ve reached a dead end and 21 percent say they’re eager to make a job change.

If these figures are accurate, up to 85 million employees are thinking they might be better off working elsewhere. If they’re serious about this, now would be the time to make a move since there are currently more open jobs than job seekers. This is making it necessary for businesses to relax their hiring standards.

They’re widening the talent pool by going after older workers, people with disabilities, and the previously incarcerated. You’re highly marketable even if all you have are the bare minimum qualifications. And your opportunities are quadrupled if you have a favorable attitude, good organizational skills, and can get along with others.

The stay-and-complain phenomenon is not new. For the past several decades the job dissatisfaction rate has remained high yet there’s never been a mass exodus of unhappy employees leaving their jobs. Here are three explanations for this.

Despite complaining about their dissatisfactions, employees still have the option to be content with their choice of work. The net result of which is their career contentment. Businesses overlook this option employees control because they’re focused primarily on their control of job satisfaction.

Career contentment is the emotion created when employees think their work is meaningful to their purposes for working. Since it is an emotion, it supplies their motivation to stay in the jobs they want and cope with the dissatisfactions when doing so fulfills their purposes. This is a good thing except that employees were never taught how to leverage this emotion as a source of resilience to stop complaining.

Just because employees say they’re dissatisfied and want to leave doesn’t guarantee they’ll do so. Complaining is the only means they have to hold businesses accountable for fulfilling their obligations to keep them satisfied. It’s how they let off steam.

Employees also know that businesses have become increasingly concerned about keeping them satisfied as a way of maintaining their productivity. So to get what they want, they’ve learned to leverage their employer’s concerns by complaining.

Even if employees are content with their work, complaining has become their default way of communicating when frustrated by what they don’t control and can’t always have. But as their negative thoughts are repeated, their brains become inclined to complain in a habitual manner. The neuroscience term for this is experience-dependent neuroplasticity.

It works like this. Your thoughts spark the release of neurons that become wired together to form a neural network. When complaining becomes repetitive, your brain learns to release the same neurons each time, further expanding the network. As you think, this makes it easier for your brain to access the network which in turn, contributes to your complaining becoming habitual.

It’s like when you defragment your computer’s hard drive so the programs you use most become rapidly accessible to you. They get moved to the top of the memory stack. In a similar manner, the more often you complain the neural network this creates gets moved to the top of your memory making it easier to complain.

The habit of complaining is avoidable by the same physiological means that created it. Rewire the brains of employees with an improved neural network that’s primed to cope with dissatisfactions rather than complain. Encourage employees to think repetitively in a favorable manner about the reasons they prefer not to leave their jobs.

Employees are already coping with dissatisfactions to stay in their jobs. They just need to learn how to use their career contentment to rewire their brains and turn off the habit of complaining.

Businesses aren’t focusing the attention of employees on this mental habit. They’re unintentionally stoking the habit to complain by focusing employees on the potential of being made satisfied when this can’t always happen.

Businesses would be wise to acknowledge the inevitability of job dissatisfaction and the option employees have to cope with it by the control of their career contentment. Then encourage employees to make better use of its self-sustaining properties and reward them for curbing the habit of complaining when content in jobs they prefer not to leave.

Jeff Garton is a Milwaukee-based author, certified career coach, and former HR executive and training, provider. He holds a master’s degree in organizational communication and public personnel administration. He is an originator of the concept and instruction of career contentment. Twitter: @ccgarton