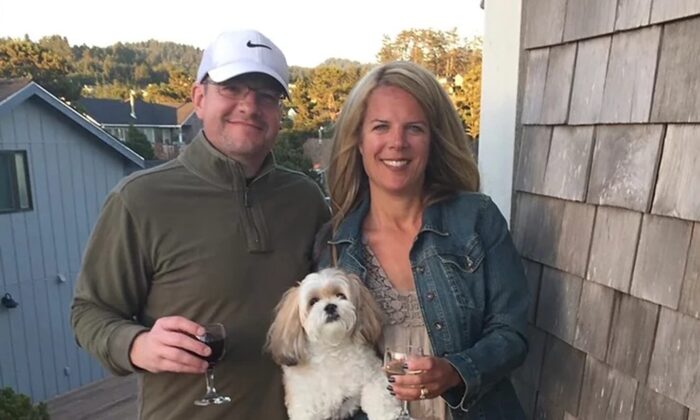 After the death of her husband at the hand of what she believes to be hospital COVID-19 treatment protocols, Joanne Eyerly’s life was uprooted in grief and confusion.

She had to sell most of her belongings and their home in Oregon to move to Ohio, where today she scrambles to put the pieces together.

Of one thing Eyerly said she is certain: “They euthanized him,” she told The Epoch Times. “I know that they did.”

Greg Eyerly was admitted to the hospital on Sept. 22, 2021. Eyerly was not allowed to stay with her husband, so she stayed in communication through text.

It seemed like he was getting better, she said, until Greg reported that he hadn’t been receiving hydration for a week. “I think they are stopping taking care of me,” Greg texted her.

Eyerly called the doctor, asking for basic fluids and vitamin D, C, and zinc treatment for Greg, she said.

“This doctor yelled at me, saying, ‘I don’t know what research you’re looking at, but we’re not doing that. That’s not what we do,’” Eyerly said.

Greg texted her that he was losing body mass rapidly and that he wasn’t being fed.

“Please help make sure there is a plan to get me out of here,” Greg texted.

Throughout his stay, Greg reported that he was seeing less and less medical staff, and Eyerly said she was getting fewer updates on his condition.

‘We Had to Give Him a Chance’

On Sept. 30, Eyerly said Greg made a 39-second call to the Tualatin Police Department, though the department has no record of the call, she said.

The next day, Eyerly was told that Greg needed to be put on a ventilator or he would die.

On Oct. 1, staff called to tell her that Greg needed protein. Since there were no protein drinks in the ICU, Eyerly needed to go out and get one for him, she said.

With the National Guard at the front entrance, Eyerly said she still wasn’t allowed inside and had to leave it at the front desk.

When she got home, she received a call from hospital staff telling her there had been an emergency and that Greg needed to be ventilated immediately.

Later, she spoke with the doctor who ventilated Greg, and he reported to her that Greg was in no way close to death, and that “his lungs just needed a break,” she said.

However, on Oct. 5, hospital staff reported to her that the ventilator had stopped working and that she and her children needed to come to see him, she said.

“I don’t understand what happened between October the first and the fifth,” she said. “The doctors didn’t offer any information.”

‘It Makes No Sense’

None of it added up, she said, and she had no time to process any of the multiple inconsistent reports from hospital staff.

“I had to come in quickly if I didn’t want my husband of 30 years to die alone,” she said. “My kids and I watched as he took his final breath. My 21-year-old daughter was so distraught she had to be taken out of the hospital in a wheelchair.”

As they were leaving after he passed on Oct. 5, Eyerly said a hospital staff member yelled at them “to get vaccinated.”

Greg had already been hesitant to go to the hospital, Eyerly said, because he had been hearing stories describing poor treatment, specifically of the unvaccinated.

Greg couldn’t take the COVID-19 vaccine because he had a history of negative side effects from the flu vaccine, she said.

It was during this time when President Joe Biden was mandating vaccines for employees on several fronts: private businesses, federal contractors, and health care workers.

When Eyerly got Greg’s medical records, she said she found that Greg had been given a combination of drugs such as morphine and fentanyl.

“It was documented heavily how he was losing weight, and he was self-feeding,” she said. “He was also listed as a fall risk, so they tied his hands down and had him sedated. How could you be so sedated and in charge of feeding yourself? It makes no sense.”

Eyerly said he lost 25 pounds in the course of 12 days.

Now, Eyerly is seeking the truth, she said.

Eyerly connected with a nurse who heard her story and told that she had witnessed COVID-19 patients being treated similarly and that these cases almost always ended in the death of the patient.

The patients were all scorned because of their unvaccinated status and were given a combination of sedatives and the antiviral drug remdesivir. They were also kept isolated and malnourished and ultimately put on a ventilator before dying.

Though Eyerly hasn’t found in Greg’s medical records where he was given remdesivir, the pattern of treatment, combined with drugs like Ativan, Dilaudid, fentanyl, morphine, and multiple sedatives and anxiety medications, suggests to her and the nurse that Greg had been subjected to COVID-19 hospital treatment protocols that have strayed from the Hippocratic Oath of “Do No Harm.”

Though she still doesn’t fully understand what happened, she said her instincts are telling her “this was not a natural death.”

“After sorting through the medical records, it’s plain to see that he did not get his basic needs met,” she said. “Food and water are not controversial treatments. They are basic human needs and rights.”

‘I Can Prove Negligence in a Heartbeat’

Gloria Kniesler has reviewed “thousands upon thousands” of medical documents that describe cases just like Eyerly’s, she told The Epoch Times.

Kniesler, a registered nurse of 22 years in New Jersey who was terminated for declining the COVID-19 vaccine, now volunteers to review cases like Eyerly’s for protocolkills.com, a website set up to inform people on what it describes as the dangers of hospital protocols.

“They didn’t even feed some of these people,” Kniesler said. “They let them starve, and I can prove negligence in a heartbeat.”

The hospital then writes it as a COVID-19 death, getting federal reimbursements through the Centers for Medicare and Medicaid Services (CMS).

The Epoch Times reached out to the World Health Organization (WHO), the Centers for Diseases Control and Prevention (CDC), and the National Institute of Health (NIH) for clarification on which organization specifically wrote and instituted what some have deemed these “death protocols” to treat COVID-19 patients that many federally funded hospitals are reported to be allegedly following.

Though the WHO and the CDC didn’t immediately respond, the NIH responded by stating that allegations of NIH being the source of the protocols is “egregiously false,” adding that it doesn’t recommend “the use of fentanyl, sedatives, or malnourishment.”

“NIH is a research agency and does not issue hospital protocols for treating COVID-19,” NIH said. “NIH is a part of the COVID-19 Treatment Guidelines Panel whose members are appointed based on their clinical experience and expertise in patient management, translational and clinical science, and/or the development of treatment guidelines. The COVID-19 Treatment Guidelines provide clinicians with guidance on how to care for patients with COVID-19.”

In its COVID treatment guidelines, the NIH said remdesivir is the only drug approved by the U.S. Food and Drug Administration to treat COVID-19.

Those who have criticized remdesivir, a drug known to cause kidney failure, cite a study found in the New England Journal of Medicine in which a safety board found it to be the least effective and the deadliest drug in this trial before it was suspended after killing 53 percent of the people who took the drug.

Kniesler has been outspoken about her medical opinion that remdesivir “is a poison.”

In New Jersey alone, CMS reimburses hospitals $17,000 for the use of remdesivir on one patient, she said, but this varies from state to state.

“That’s why this is happening in federally funded hospitals,” she said.

In most cases, the patients who undergo the protocols are unvaccinated, and their cause of death, though recorded as COVID, is multiple organ failure, she said.

In her review of the case of Therese Hernandez’s father, Vietnam War veteran Joseph Occhipinti, Kniesler said Occhipinti had gone to the hospital in New Jersey to get monoclonal antibody treatment.

However, when the hospital found that he was unvaccinated, the treatment protocols changed from monoclonal antibodies to remdesivir, Hernandez told The Epoch Times.

“We thought he was getting better, and all of the sudden he began telling us that they were forgetting to feed him,” Hernandez said. “They forgot to bring him food and water. I told him they’re not forgetting. Something was wrong. They were neglecting him.”

He went into kidney failure as his organs began to fail, Hernandez said.

Similar to Eyerly’s and other cases, Hernandez got the call telling her that her father needed to be put on the ventilator or he would die, she said.

“They scared us into venting him,” Hernandez said. “By that point, his kidneys were completely shot.”

Occhipinti was kept isolated from the time he was admitted on Sept. 3 to his death on Sept. 29.

“They called us and told us, ‘You better get up here now because it’s not looking good,’” she said. “Just the day before, they told me he was improving. So they pretty much lied to us the entire time he was in the hospital,” Hernandez alleged.

In addition to being devastated, Hernandez said she also felt “that something wasn’t right.”

“My father was a healthy 68 years old and had no health problems,” she said. “He had just retired and was enjoying life. That was ripped from him for no reason. He fought for this country and this country failed him.”

Having just been fired, Kniesler was standing in line at her local UPS Store to fax paperwork for her 401(k) when she met Hernandez, who was also in line.

They began talking and Hernandez shared her story, Kniesler said.

“One of the biggest things I found with his case was that his hemoglobin was half of what it should be,” she said. “That means he didn’t have half the blood [cells needed] in his body, and they did nothing. They didn’t even acknowledge it. Why did they not give him a transfusion, which could have very well helped his breathing and prevented cardiac arrest?”

Occhipinti went into cardiac arrest, Kniesler said, because she believes his heart had to overwork itself to get oxygen to the cells, “and that can’t be sustained.”

“If they had given him a transfusion, the outcome could have been different,” she said. “But it doesn’t even matter if the outcome were different; he still deserved the top standard of care, and he didn’t get that.”

Two days before Occhipinti died, when Hernandez had been told that her father was improving, the doctor wrote an order for the nurse to contact an organ donor organization, Kniesler said.

“This shows that the doctor had no intention of saving this man,” Kniesler said. “One never does this until the patient is dead.”

Occhipinti was classified as “full code,” meaning he was to be resuscitated, Kniesler said.

“At the time he was writing that order, the patient was intubated and on a ventilator, with half the blood in his body,” Kniesler said. “So, does that show you that the doctor was trying to save him?”

The level of neglect Kniesler said she’s seen in Occhipinti’s and other medical records is “heart-wrenching,” she said.

Light exercises such as deep breathing practice and walking aren’t encouraged when they should be, Kniesler said, leaving the patients forced to stay in bed even when they show signs of improvement.

“Putting COVID, these protocols, and the use of remdesivir aside, I’m seeing so many other things I can’t even believe I’m reading,” Kniesler said. “It’s truly unreal.”