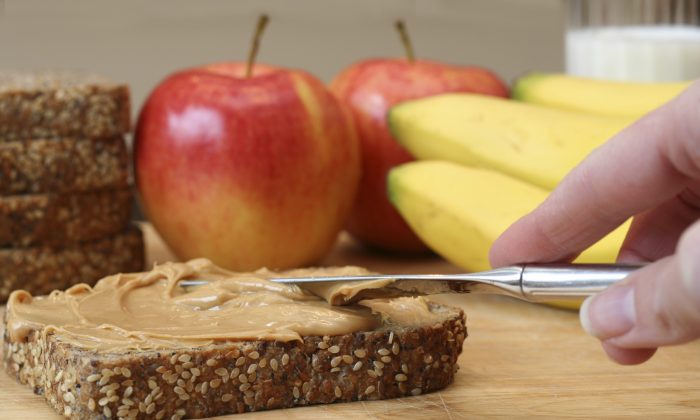 Is Peanut Butter Bad for Your Health? A Look at the Evidence

I personally have a love-hate relationship with peanut butter.

I love how it tastes and I love the smell. The texture of it is simply amazing and I even like the way it sticks to the roof of my mouth before it melts.

On the other hand, I really, really hate how my satiety signals just don’t seem to respond to peanut butter in the same way as with other foods.

Usually when I eat food, I only have to eat a “reasonable” amount for some subconscious signal to tell me “hey, you’ve had enough!”

But peanut butter doesn’t seem to respect these boundaries.

If I ever happen to indulge even a little bit, I usually end up eating an entire jar… and still have a lingering feeling of wanting just a little bit more.

Apparently I’m not alone… I also regularly get e-mails from people asking me about peanut butter, so I thought I’d try to unravel what the ultimate health effects of it are.

To begin with, some people are allergic to peanuts. For a small percentage of the population, peanuts can kill. Literally.

But this article is about the other 99% of people, who can eat peanut butter without any noticeable adverse effects, at least in the short term.

So… is eating peanut butter bad for you in the long run? Let’s find out.

How Peanut Butter Is Made

It’s pretty much just peanuts, often roasted, that are ground until they turn into peanut butter.

However, many commercial brands of peanut butter aren’t really just peanut butter. They often have sugar and other nasty things added to them.

However, I’m going to assume that you know this already and diligently read labels, so I’m not even going to go there. This article is about real peanut butter, nothing but peanuts, perhaps mixed in with a bit of salt.

The main problem with peanut butter is that it’s so incredibly hard to resist.

I’ll save the salt discussion for another time, but personally I wouldn’t be too worried as I think the “dangers” of it have been blown way out of proportion. In studies, restricting salt or sodium has no effect on cardiovascular disease or death.

I should also point out that peanuts aren’t technically nuts. They’re legumes, which are among the forbidden food groups on a strict “paleo” diet.

Little Carbohydrate, Some Protein and Lots of Fat

Peanut butter is a fairly “balanced” energy source in the way that it supplies all three macronutrients. A 100g portion of peanut butter contains:

Along with this hefty dose of macronutrients are 588 calories, in a 100g portion of peanut butter.

Even though peanut butter is fairly protein rich, it doesn’t have much of some essential amino acids like lysine. To make full use of the protein, you need to eat a lysine-rich protein source along with the peanut butter, such as protein rich animal foods like meat or cheese.

The fat in peanut butter is about 50% monounsaturated and 20% saturated. The rest of it (about 30%) is polyunsaturated fat, mostly the Omega-6 fatty acid linoleic acid, which can be problematic and I’ll get to in a minute.

Peanut Butter is Fairly Rich in Vitamins and Minerals

Peanut butter is fairly nutritious. A 100 gram portion of peanut butter supplies a whole bunch of vitamins and minerals:

There’s also a decent amount of Vitamin B5, Iron, Potassium, Zinc and Selenium in peanut butter.

However, be aware that this is for a 100 gram portion, which has a total of 588 calories. Calorie for calorie, peanut butter actually isn’t that nutritious compared to low-calorie plant foods like spinach or broccoli.

Other Important Nutrients in Peanuts

As it is with most real foods, they do contain more than just the classic vitamins and minerals. There are also plenty of other biologically active nutrients in foods, which can have some health benefits.

Peanut butter is no exception and is pretty rich with antioxidants, including p-coumaric acid which may lead to a decreased risk of stomach cancer.

It also contains some resveratrol, which may lower the risk of cardiovascular disease. It has small amounts of Q10, an important nutrient in energy metabolism. Then it has a decent amount of Beta-sitosterol, a nutrient that may have anti-cancer properties.

A Potential Source of Aflatoxins

Even though peanut butter is quite nutritious, it may also contain substances that cause harm.

At the top of the list are so-called Aflatoxins.

Peanuts actually grow underground, where they tend to be colonized by an ubiquitous fungus called Aspergillus, a source of aflatoxins… which are toxic and highly carcinogenic.

Humans are actually fairly resistant to the acute (short-term) effects of aflatoxins, but what happens down the line is not fully known at this point.

However, some studies in humans link aflatoxin exposure to liver cancer, stunted growth in children and mental retardation.

But there are good news… according to one source, the processing of peanuts into peanut butter reduces the aflatoxins by 89%.

Additionally, the USDA monitors the amounts of aflatoxins in foods and makes sure that they don’t go over recommended limits. However, I’m not sure I really trust these people very much as they have a track record of getting things wrong.

I’m not sure if the amount of aflatoxins in peanut butter is something to be worried about. It seems plausible, especially if you eat it regularly.

Omega-6s and Lectins in Peanut Butter

As I mentioned above, about 30% of the fatty acids in peanut butter are the Omega-6 fatty acid linoleic acid.

Peanut butter also contains a lectin called Peanut Agglutinin. Lectins are a diverse group of proteins that have the ability to bind carbohydrates.

Lectins are everywhere, they’re in all foods, but some people believe that lectins from particular foods can cause harm.

However, animal studies have shown that peanut oil along with high doses of cholesterol can induce atherosclerosis (thickening of arteries, which can lead to heart attacks) in animals like monkeys and rabbits.

However, these studies have been criticized for including ridiculous amounts of cholesterol and other studies actually show a reduction in atherosclerosis in test animals.

I’d like to point out that excessive Omega-6 fatty acids in the diet are associated with inflammation and an increased risk of cardiovascular disease.

There are a few observational studies I found showing a lower risk of some diseases for people who eat the most peanuts and peanut butter.

In one study in Taiwan, individuals who ate peanuts had a 27% lower risk of colorectal cancer.

In the Nurses’ Health Study, a massive study of 83.818 women in the U.S., those who ate peanut butter regularly had a 21% lower risk of type II diabetes.

These are observational studies that don’t prove that peanuts actually reduce any disease, just that people who eat peanuts are less likely to get them.

Probably Fine in Small Doses, But…

There are a lot of good things about peanut butter, but also a few negatives.

It is fairly rich in nutrients and actually a decent protein source if you make sure to eat a lysine-rich food source along with it.

It is loaded with fiber, vitamins and minerals, although this doesn’t seem as significant when you consider the high caloric load.

On the other hand, it is a potential source of aflatoxins and contains very high amounts of a fatty acid that most people are eating too much of and is associated with harmful effects in the long run.

Even though I wouldn’t recommend peanut butter as a dominant food source in the diet, it is probably fine to eat every now and then in small amounts.

But the main problem with peanut butter is that it’s so incredibly hard to resist.

If you eat only small amounts at a time, then it probably won’t cause any sort of harm. However, it can be almost impossible to stop after eating just a little bit.

So if you have a tendency to binge on peanut butter, it may be best to just avoid it altogether. If you can keep it moderate, then by all means continue to eat peanut butter every now and then.

I highly doubt moderate consumption of peanut butter will have any major negative effect as long as you are avoiding the truly awful foods like sugar, wheat, trans fats and vegetable oils.